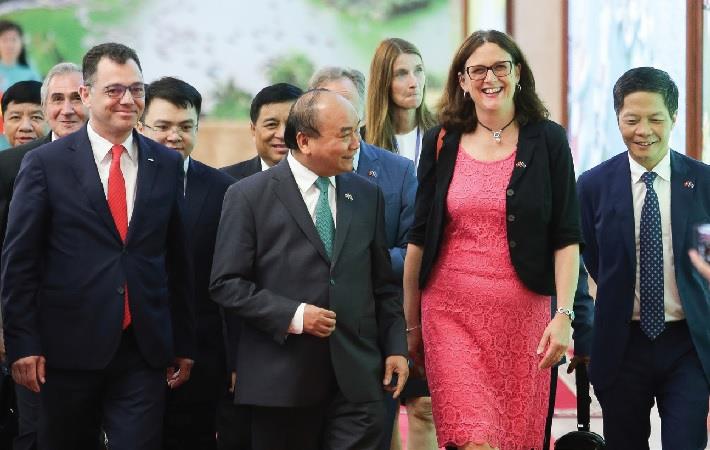 The European Union (EU) signed a Free Trade Agreement (FTA) and an Investment Protection Agreement (IPA) with Vietnam. The implementation of the Vietnam–EU Comprehensive Partnership and Cooperation Framework Agreement (PCA) will result in tariff reductions on 99 per cent of goods between the EU bloc and Vietnam. The deal was signed in Hanoi by the EU Trade Commissioner…

India is likely to release soon the first index to rank states and union territories (UTs) based on preparedness to promote exports. This will help promote healthy competition among states and UTs to work on parameters like business environment, infrastructure, transport connectivity and access to finance for promoting exports, a key indicator for economic growth. Both the Niti Aayog and the commerce ministry are working on this index. India’s share in global merchandise exports and services was 1.7 per cent and 3.4 per cent, respectively. The country’s exports dipped by 2.39 per cent to $159.57 billion during April- September 2019–20.

The council of the European Union (EU) approved the EU-Singapore free trade agreement (FTA) that will remove almost all customs duties between both sides from November 21. It is the first such agreement between the EU and a member state of the Association of Southeast Asian Nations (ASEAN). The EU-Singapore FTA will allow 84 per cent of Singaporean exports to enter the EU duty-free, with the rest to follow in the next three to five years. It also contains strong rules on trade and sustainable development, including the protection of labour rights and the environment.

To read more subscribe to January 2020 edition of Fibre2Fashion.

For queries & brickbats, write to: richabansal@fibre2fashion.com

Vietnam inks landmark trade deal with European Union The European Union (EU) signed a Free Trade Agreement (FTA) and an Investment Protection Agreement (IPA) with Vietnam. The implementation of the VietnamâEU Comprehensive Partnership and Cooperation Framework Agreement (PCA) will result in tariff reductions on 99 per cent of goods between the EU bloc...
More Textiles News - Global...