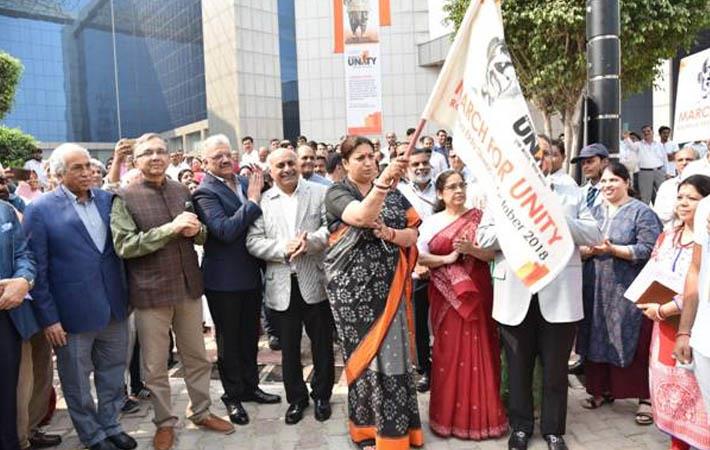 Union minister of textiles flagging of Unity March in Gurugram.
Union minister of textiles Smriti Irani unveiled the 'Fabric of Unity' on the birth anniversary of Sardar Vallabhbhai Patel in Gurugram. The event organised by Apparel Export Promotion Council (AEPC) was in celebration of Indian textiles, an embodiment of integrity of the country. Irani urged AEPC to spread the concept of fabric of unity in its offices.

Speaking on the occasion, Irani referred to Rs 6000 crore package launched by the government of India in 2016 for the growth of apparel and garment sector to bring in more skilled labour in the organised sector. Irani also asked AEPC to put together the entire history and the textile designs of the then princely states which were united into the Indian Union by Sardar Patel.

"Indian textiles have played an important role in the Indian freedom movement and what can be a better example of Unity in diversity than the Indian textile heritage.  The Fabric of Unity is an event to celebrate this. Father of the nation Mahatma Gandhi regarded khadi as the material embodiment of an ideal that represented freedom on one hand and a feeling of self-reliance and economic self-sufficiency on the other," HKL Magu, chairman, AEPC said.

"This year is AEPC's 40th year of service in promotion of apparel exports around the world. We feel proud to be working on some very important initiatives to promote inclusion and sustainable apparel eco system. In the words of our prime minister, Sardar Patel formulated solutions one by one, weaving the warp and weft of unity on the axis of a single thread," AEPC said in a press release.

"AEPC has organised this Fabric of Unity event in which industry, workers, and volunteers took the pledge to work for the betterment of the nation. In continuation to this spirit of the Unity Pledge - to contribute to the nation building as an unified entity,  AEPC can take this concept of Fabric of Unity forward by showcasing  the rich history of the diverse fabric and textiles traditions of India at AEPC premises," Irani, said at the event. (RR)

Union minister of textiles Smriti Irani unveiled the 'Fabric of Unity' on the birth anniversary of Sardar Vallabhbhai Patel in Gurugram. The event organised by Apparel Export Promotion Council (AEPC) was in celebration of Indian textiles, an embodiment of integrity of the country. Irani urged AEPC to spread the concept of fabric of unity in its offices.
More Apparel Export Promotion Council News... More Textiles News - India...