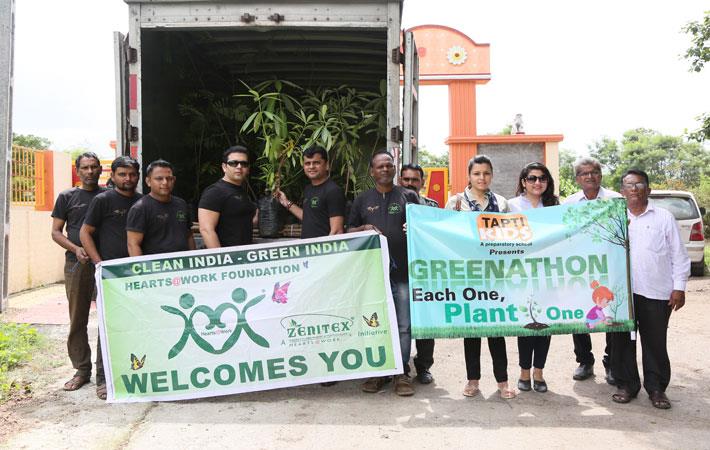 Courtesy: Zenitex
Hearts@Work Foundation, set up by Viral Desai, CEO of Surat-based Zenitex, held a tree plantation drive in Mota Gam of Bardoli district this month. Around 350 trees were planted under the ‘Clean India – Green India’ initiative of the Foundation at Rokadia Hanuman and Siddheshwar Mahadev temples in the village. The plants will be nurtured by the villagers.

Desai, who is fondly called the ‘Green Man’, is known for his contribution towards energy conservation and environment protection. Desai’s infectious energy and enthusiasm were evident during the plantation drive, in which local villagers participated wholeheartedly. “This was probably the first time that such a unique event was taking place at the temple premises of the village,” Zenitex said in a press release.

“This was a unique event wherein the villagers contacted us and gave us an opportunity to plant valuable trees on the sacred premises. We are always open and looking forward to planting as many trees as possible for our mother nature whenever approached by any village, society, locality, social or religious groups,” said Desai.

The occasion was graced by Kiran Desai and Kiran Shukla, both eminent personalities of the Mota Gam village. “We had heard about Viral Desai and his team’s plantation drives which made us to contact them. We were surprised to see such an enthusiastic team under the leadership of Viral which came to our village with all kind of plants for plantation. Seeing passion of a young entrepreneur like Viral for environment protection and plantation drive is truly inspiring. We are thankful to them for reaching out to our village for plantation,” said Kiran Desai.

The event has set an example for future generations to follow. Representatives of ‘Tapti Kids’, who participated in the plantation programme, launched the promotion of their upcoming event ‘Greenathon – Each One – Plant One’ to be held on September 2, 2018, with Viral Desai as a brand ambassador.

So far, an estimated 19,150 trees have been planted by the Foundation under the ‘Clean India – Green India’ initiative.

“We expect more textile units to indulge in this kind of activities to avoid floods and other natural calamities,” said the release. (RKS)