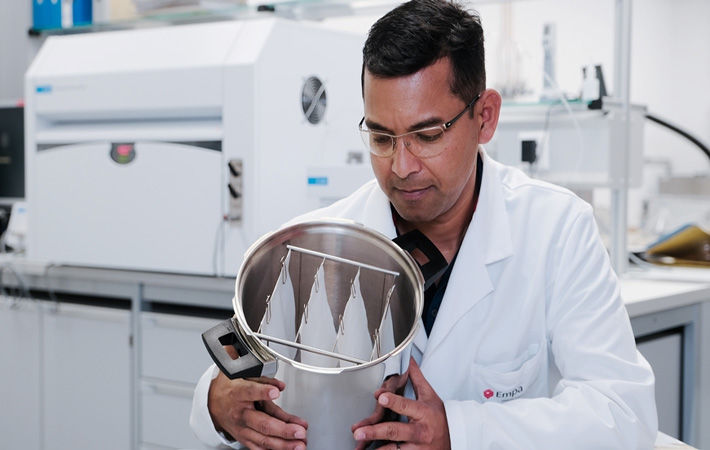 Pic: Empa
Scientists from Empa – the Swiss Federal Laboratories for Materials Science and Technology – have developed a new method to make cotton fire-resistant which retains its skin-friendly properties. State-of-the-art flame retardant cotton textiles release formaldehyde and are uncomfortable to wear since these reduce capability of cotton to absorb water.

Empa scientists created a physically and chemically independent network of flame retardants inside the cotton fibres. This approach retains the inherently positive properties of cotton fibres, which account for three-quarters of the world's demand for natural fibres in clothing and home textiles. Cotton is skin-friendly because it can absorb considerable amounts of water and maintain a favourable microclimate on the skin.

For firefighters and other emergency service personnel, protective clothing provides the most important barrier. For such purposes, cotton is mainly used as an inner textile layer that needs additional properties. For example, it must be fireproof or protect against biological contaminants. It should also not be hydrophobic, which would create an uncomfortable microclimate. These additional properties can be built into the cotton fibres by suitable chemical modifications.

Scientists from Empa â the Swiss Federal Laboratories for Materials Science and Technology â have developed a new method to make cotton fire-resistant which retains its skin-friendly properties. State-of-the-art flame retardant cotton textiles release formaldehyde and are uncomfortable to wear since these reduce capability of cotton to absorb water.

"Until now, it has always taken a compromise to make cotton fireproof," says Sabyasachi Gaan, a chemist and polymer expert who works at Empa's Advanced Fibres lab. Wash-durable flame retardant cotton in industry is produced by treating the fabric with flame retardants, which chemically link to the cellulose in the cotton. Currently, the textile industry has no other choice than to utilise formaldehyde-based chemicals. Formaldehyde is classified as a carcinogen. This has been an unsolved problem for decades. While formaldehyde-based flame retardant treatments are durable, they have additional drawbacks – these treatments chemically block the -OH groups of cellulose, which reduces the capability of cotton to absorb water, resulting in an uncomfortable textile.

Gaan, who knows the chemistry of cotton fibres well and has spent many years at Empa developing flame retardants based on phosphorus chemistry that are already used in many industrial applications, found an easy way to anchor phosphorous in form of an independent network inside the cotton.

The novel phosphorus chemistry can also be used to develop other materials, such as hydrogels that will release drugs upon changes in pH. These gels could be useful in treating wounds that heal slowly. In such wounds, increase in the pH of the skin surface triggers the new phosphorus-based gels to release medication or a dye that alerts doctors and nurses to the problem. Empa has patented the production of such hydrogels.

Gaan and his team utilised a tri-functional phosphorous compound (trivinylphosphine oxide), which has the capability of reacting only with specifically added molecules (nitrogen compounds like piperazin) to form its own network inside cotton. This makes the cotton permanently fire-resistant without blocking the favourable -OH groups. In addition, the physical phosphine oxide network also likes water. This flame retardant treatment does not include carcinogenic formaldehyde, which would endanger textile workers during textile manufacturing. The phosphine oxide networks do not wash out. After 50 launderings, 95 per cent of the flame retardant network was still present in the fabric.

To add more protective properties to the flame retardant cotton, the team incorporated in situ generated silver nanoparticles inside the fabric. This works in a one-step process together with generating the phosphine oxide networks. Silver nanoparticles provide the fibre with antimicrobial properties and survive 50 laundry cycles.

"We have used a simple approach to fix the phosphine oxide networks inside the cellulose," Gaan says. "For our lab experiments, we first treated the cotton with an aqueous solution of phosphorus and nitrogen compounds and then steamed it in a readily available pressure cooker to facilitate the crosslinking reaction of the phosphorus and the nitrogen molecules." The application process is compatible with equipment used in the textile industry. "Steaming textiles after dyeing, printing and finishing is a normal step in textile industry. So, it doesn't require an additional investment to apply our process," Gaan adds.

The newly developed phosphorus chemistry and its application are being patented. “Two important hurdles remain," Gaan says. "For future commercialisation we need to find a suitable chemical manufacturer who can produce and supply trivinylphosphine oxide. In addition, trivinylphosphine oxide has to be REACH-registered in Europe.”