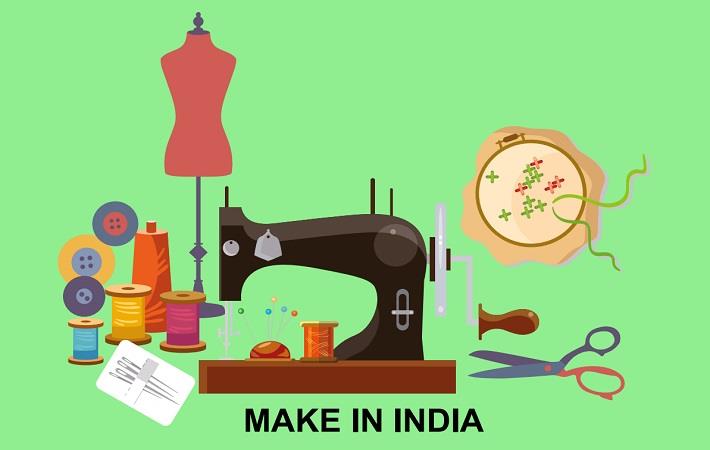 Courtesy: PIB
The share of textiles and apparel in total exports of India increased to 15 per cent in 2015-16, compared to 13 per cent in 2013-14, according to a report released by the textiles ministry. FDI equity inflow grew by 16 per cent in the 2015-16 over fiscal 2013-14 and the government has also approved a special package of Rs 6,000 crore for the sector.

The ‘Make in India – Textile and Apparel Sector Achievement’ report released by the ministry of textiles and the department of industrial policy and promotion states that the special package has been provided with the aim of creating 1 crore jobs in the next 3 years. The funds will also be used for attracting investments worth $11 billion and generate $30 billion in exports.

Categories like readymade garments, wool and woolen textiles, silk, carpets, handicrafts and coir and coir products recorded the highest export growth. Textile and apparel exports are estimated to reach $62 billion by 2021 from $38 billion in 2016. While Europe and America are the key markets for India, new markets such as Iran, Russia and South America are opening up new possibilities.

The Revised Restructured Technology Fund Scheme (RRTUFS) has been modified to launch the Amended Technology Upgradation Fund Scheme (ATUFS), which provides a one-time capital subsidy for ‘eligible machinery’ for a period of 7 years. The scheme with a budget provision of Rs 17,822 crore for 7 years has been introduced to attract investment of up to 1 lakh crore and employ 35 lakh people. An additional incentive of 10 per cent subsidy is provided to garmenting units which avail the Capital Investment Subsidy (CIS) under ATUFS.

The report says that a variety of tax reforms and benefits have been introduced in the past two years to promote the sector and improve infrastructure. The textiles ministry is also implementing North East Region (NER) Textile Promotion Scheme (NERTPS) with a total outlay of Rs 1038.10 crore to promote employment and encourage entrepreneurship especially amongst women. The Scheme for promoting Geotechnical Textiles in North East Region (NER) with a budget of Rs 427 crore has also been launched to promote and utilise geo textiles in development of the infrastructure in the NER states.

To help budding entrepreneurs develop innovative technical textile products, 6 Focus Incubation Centres (FIC) on Technical Textiles have been set up at a cost of Rs 17.4 crore. Efforts are also being made to promote the handloom sector that employs around 4.3 million people and has about 2.37 million handlooms.

Under ease of doing business initiatives, the government has exempted textiles and textile articles imported from specific countries like European Union, Serbia, Poland, Denmark and China from testing of samples for presence of Azo Dyes. The report also states that under the Integrated Skill Development Scheme (ISDS), the ministry has trained more than 5.3 lakh youth in textile trades. (KD)