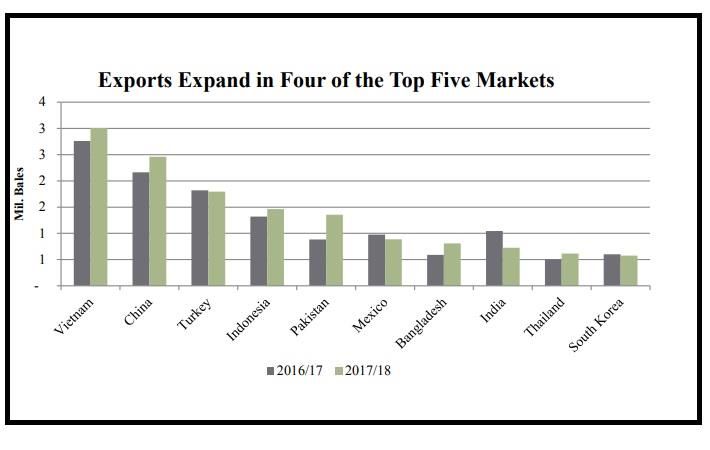 Courtesy: USDA/FAS
Cotton exports from the US in 2017-18 reached their highest level since 2005-06 and were the second highest on record, the Foreign Agricultural Service of the US department of agriculture (USDA) has said. The record reported exports were on the back of the largest cotton production in the US in more than 10 years and record global consumption.

Compared with 2016-17, US cotton shipments expanded in four—Vietnam, China, Indonesia and Pakistan—of the top five markets. However, expanding use in Southeast and South Asia has underpinned significant US shipments recently.

For the third year in a row, Vietnam continued to be the top US market where shipments surpassed last year’s record, owing to the country’s record yarn production and robust yarn exports.

China was the second-largest destination for US cotton and served as the largest market for US Pima (extra-long staple grade). “Demand for Pima and Upland continues to grow as China pursues higher quality inputs and works domestic stocks down further,” the USDA report ‘Cotton: World Markets and Trade’ said.

US exports to Pakistan saw the largest year-on-year increase despite its larger domestic crop. The country’s yarn production continues to grow and is expected to expand into 2018-19, a promising sign for US export prospects.

Shipments to Mexico and Turkey were down compared to the previous year, due to higher production in those countries.

For 2018-19 cotton season, US exports are forecast down slightly, with exportable supplies lower in the US and higher for the rest of the world excluding China. Nonetheless, 2018-19 US shipments are forecast to be the second-highest since 2005-06 with global use projected at a record, the report said. (RKS)