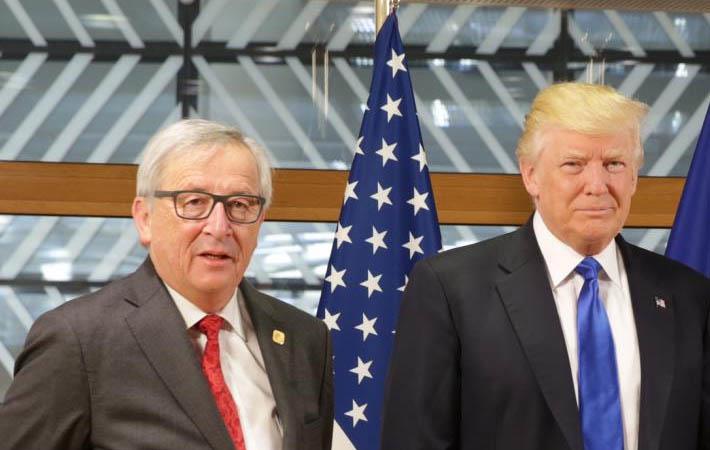 President Juncker (left) with President Trump; Courtesy: eeas.europa.eu
Indicating a u-turn in their trade relations, the United States and the European Union have agreed to launch a new phase in their relationship, including working together toward zero tariffs. The decision was taken during a meeting between US President Donald Trump and the President of the European Commission Jean-Claude Juncker in Washington, D.C.

US-EU trade relations in recent months had soured after the US imposed tariffs on steel and aluminium imports, which was retaliated by EU by initially imposing tax on €2.8 billion worth of US products with effect from June 22, 2018.

A joint US-EU statement after the meeting described the new phase in their relationship as “a phase of close friendship, of strong trade relations in which both of us will win, of working better together for global security and prosperity, and of fighting jointly against terrorism.”

“The United States and the European Union together count more than 830 million citizens and more than 50 percent of global GDP. If we team up, we can make our planet a better, more secure, and more prosperous place,” Trump and Juncker said in the joint statement.

They agreed, first of all, to work together toward zero tariffs, zero non-tariff barriers, and zero subsidies on non-auto industrial goods. “We will also work to reduce barriers and increase trade in services, chemicals, pharmaceuticals, medical products, as well as soybeans,” the joint statement said. This will open markets for farmers and workers, increase investment, and lead to greater prosperity in both the US and the EU. It will also make trade fairer and more reciprocal.

Secondly, the leaders agreed to strengthen US-EU strategic cooperation with respect to energy, wherein the EU will import more liquefied natural gas (LNG) from the US to diversify its energy supply.

Thirdly, a close dialogue on standards will be launched in order to ease trade, reduce bureaucratic obstacles, and slash costs.

Fourthly, the US and EU will join forces to protect American and European companies better from unfair global trade practices. “We will therefore work closely together with like-minded partners to reform the WTO and to address unfair trading practices, including intellectual property theft, forced technology transfer, industrial subsidies, distortions created by state owned enterprises, and overcapacity,” the statement said.

An Executive Working Group will be set up to carry forward the agenda agreed by the two presidents. The Group will also identify short-term measures to facilitate commercial exchanges and assess existing tariff measures.

“While we are working on this, we will not go against the spirit of this agreement, unless either party terminates the negotiations,” they said. “We also want to resolve the steel and aluminum tariff issues and retaliatory tariffs.” (RKS)

Iran suffers from a high level of illegal apparel imports, with about ...

In the times of lockdown, Asos Marketplace has witnessed strong...

Otrium, an online fashion marketplace that helps global and...