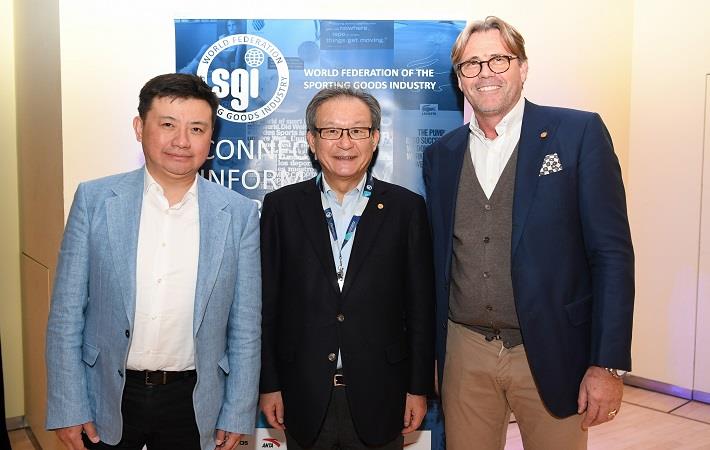 Pic: WFSGI
Motoi Oyama-san, chair and CEO, representative director Asics Corp and James Zheng, executive director and president of Anta Sports Products China, were both elected for a three-year term as co-chairs of a renewed board at the World Federation of the Sporting Goods Industries (WFSGI) General Assembly in Munich, Germany on January 29, 2020.

Oyama and Zheng took over from Sean O’Hollaren, senior vice president, government and public affairs at Nike Inc. O’Hollaren remains on the WFSGI Board as the immediate past chair and a representative for Americas.

Oyama and Zheng were automatically elected as member of the executive board and as representatives for Asia/Oceania in accordance with By-Law 10.4.

Motoi Oyama-san, chair and CEO, representative director Asics Corp and James Zheng, executive director and president of Anta Sports Products China, were both elected for a three-year term as co-chairs of a renewed board at the World Federation of the Sporting Goods Industries (WFSGI) General Assembly in Munich, Germany on January 29, 2020.#

The new co-chair structure is an ideal match when it comes to the Tokyo Olympic Summer Games 2020 in Japan and the Beijing Olympic Winter Games 2022 in China. As an IOC Recognized Organization and with a chair coming from each country, the WFSGI is well placed to deliver the right support to the industry and the Olympic movement.

“We will work closely with the IOC to determine the best way to maximise our organisation’s synergies for the benefit of the industry, the athletes and the Olympic Movement. We will also seek to build on our existing engagement and collaboration with the International Federations and ensure that our industry can continue to support our athletes in performance and health, and through promotion. Our industry is one of the largest product suppliers to National Olympic Committees during the Olympic Games in Tokyo 2020. We are also proud to say that 77 NOC’s and around 600 athletes will receive free of charge competition uniforms from 12 WFSGI members through an IOC and WFSGI solidarity initiative called the ‘NOC Uniform Support Programme’. The Programme, now in its third edition, is designed to help athletes whose NOC’s are either unable to procure sponsors or afford products that comply with the Olympic Games’ Rule 50. The Programme therefore ensures the supported NOC’s athletes are able to focus their efforts on their performance in the Games with pride and without fear that their team uniforms are non-compliant,” said O’Hollaren in a company press release.

Zheng joined the Anta Group in October 2008 and has over 15 years of experience in the field of marketing management, including over eight years in the China division of an international sportswear brand as the sales vice president and the general manager. Zheng holds a bachelor’s degree in management science from Shanghai Fudan University.

Jeannie Renné-Malone
VF Corporation
VF has evolved to become a sustainability leader in the...
Subir Mukherjee
Bhaskar Industries
There is a need for superhighway connecting India and...
Vesna Pavletic
Biocrystal Technologies
The market for sleep enhancing products is huge
Susan Bhaktul
Industree Foundation
Leveraging artisanal skills
Alvaro Mars
Label - Alvaro Mars
Fashion is my tool to expose concerns and stand up visually
Lana Marie Constantine
Ariella Fashions Ltd.
"Fashion is a statement and an expression of your personal...
Bani Pasricha
Label - Bani Pasricha
we are trendsetters instead of trend followers.