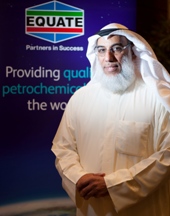 EQUATE Petrochemical Company announced a net profit of USD 1.09 Billion for the fiscal year ending December 31st, 2012, which is a 3% increase over the USD 1.05 billion achieved in 2011.

On this occasion, EQUATE President & CEO Mohammad Husain said, “These profits were realized through absolute integration of all commercial, industrial, administrative and other elements, as well as global demand for these products.”

Husain noted, “Sales value in 2012 has exceeded USD 2.6 billion for the first time in EQUATE’s history which was a result of overall organizational efficiency by manifesting its tagline of ‘Partners in Success’ with all stakeholders within and outside Kuwait.”

Husain added, “EQUATE has recently devised its ‘2020 Strategy’ that includes three main stages with the first focusing on qualifying relevant human resources, the second preparing to enter the international scene and the third is venturing into the global arena. The first phase is all about creating as much added-value from current facilities, while the second and third are all about making EQUATE have greater global presence, with all stages focusing on distinguished human resources, especially Kuwaitis, through being more specialized and optimum technology utilization within a creative, innovative and sustainable work environment.”

Husain extended utmost appreciation and gratitude to EQUATE Board, all employees and every person who has contributed to its success in all fields.

Older generations are leading the way in the slow fashion movement,...

Snake, a Croatian platform that enables users to wear outfits in...