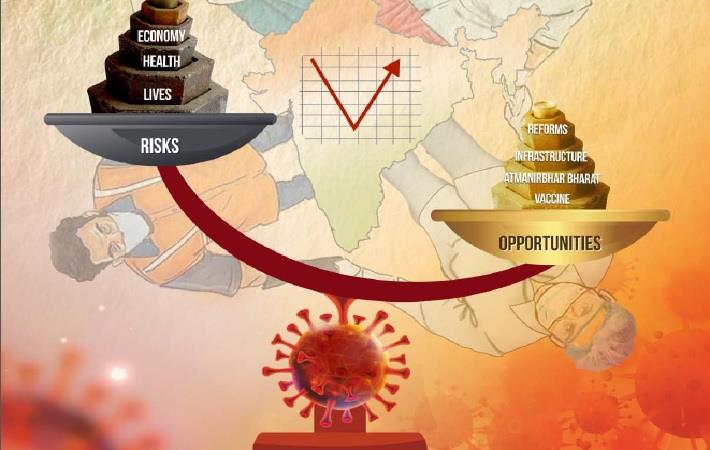 A portion of the Cover Page of Economic Survey, 2020-21, Volume - 1. Pic: Ministry of Finance
Covid-19 pandemic has triggered the worst global recession in 2020 since the Great Depression; the adverse economic impact is, however, expected to be lesser than initially feared, says the Economic Survey 2020-21 tabled by Union finance minister Nirmala Sitharaman in Parliament today. It adds that India will end with an annual current account surplus after a period of 17 years.

"The resulting economic crisis has led to a sharp decline in global trade, lower commodity prices and tighter external financing conditions with varying implications for current account balances and currencies of different countries. Global merchandise trade is expected to contract by 9.2 per cent in 2020," the Survey said.

The Economic Survey observes that India’s decline in imports outweighed that in exports – leading to smaller trade deficit of $57.5 billion in April-December 2020-21, compared to $125.9 billion in corresponding period last year.

In April-December 2020-21, merchandise exports contracted by (-)15.7 per cent to $200.8 billion from $238.3 billion in April-December 2019-20. This can be attributed to the Petroleum, Oil and Lubricants (POL) exports that have contributed negatively to export performance during the period under review, while non-POL exports turned positive subsequently and helped in improving export performance in Q3 of 2020-21.

The total merchandise imports declined by (-)29.1 per cent to $258.3 billion during April-December 2020-21 from $364.2 billion during the same period last year. The sharp decline in POL imports pulled down the overall import growth. While the imports contracted sharply in Q1 of 2020-21, the pace of contraction eased in subsequent quarters. Trade balance with China and the US improved as imports contracted, says Economic Survey 2020-21.

The Economic Survey, 2020-21, observes that the Balance on the capital account is buttressed by robust FDI and FPI inflows. During April-October 2020, net FDI flows recorded an inflow of $27.5 billion, 14.8 per cent higher as compared to first seven months of 2019-20.These developments in current and capital account led to accretion of foreign exchange reserves that rose to an all-time high of $586.1 billion as on January 8, 2021.

As at end-September 2020, India’s external debt was placed at $556.2 billion, recording a decrease of $2.0 billion (0.4 per cent) over the level, as at end-March 2020, with marginal rise in its ratio to GDP to 21.6 per cent. The debt vulnerability indicators such as the ratio of foreign exchange reserves to total and short-term debt (original and residual) and short-term debt (original maturity) to the total stock of external debt improved. Debt service ratio (principal repayment plus interest payment), however, increased to 9.7 per cent as at end-September 2020, compared to 6.5 per cent as at end-March 2020, reflecting lower current receipts.

Economic Survey, 2020-21 says that RBI’s interventions in forex market have been largely successful in controlling the volatility and one-sided appreciation of the rupee. High levels of headline inflation, however, posits the classical trilemma before RBI to maintain a fine balance between tightening of monetary policy to control inflation on the one hand and stimulate growth on the other hand. Against the aforesaid backdrop, various initiatives undertaken to promote exports, including Production Linked Incentive (PLI) Scheme, Remission of Duties and Taxes on Exported Products (RoDTEP), emphasis on improvement of trade logistics infrastructure and use of digital initiatives would go a long way in enabling ‘ease of doing exports’.

Covid-19 pandemic has triggered the worst global recession in 2020 since the Great Depression; the adverse economic impact is, however, expected to be lesser than initially feared, says the Economic Survey 2020-21 tabled by Union finance minister Nirmala Sitharaman in Parliament today. India will end with an annual current account surplus after 17 years.
More Ministry of Finance News... More Textiles News - India...