The European textile and clothing industry is at a crucial phase of development - it faces unprecedented competition from abroad, plus rising production costs. Traditionally an industry of very small, specialised companies, new production approaches are needed to speed up the supply chain. Exciting new technologies promise unexpected textile applications, but SMEs need encouragement to innovate. 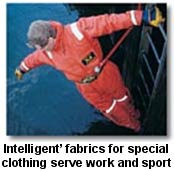 Textiles and clothing are a major sector of European industry, with an annual turnover of ?215 billion and a workforce of around 2.7 million. In some southern and eastern EU Member States such as Portugal and Lithuania, the sector accounts for as much as 25-30% of total industrial employment.

The industry's 170,000 companies in the European Union employ an average of 15 people per company, and many are much smaller. This high level of fragmentation has made a concerted approach to research and innovation difficult. Financial and human resources are highly stretched, with many general managers covering innovation as well as purchasing, marketing and all the rest.

In recent years, the textile industry has met several major challenges. In January 2005, the WTO Agreement on Textiles and Clothing came to an end, so that quotas restricting textile imports to the EU, already progressively reduced, were removed entirely, increasing competitive pressure from Asian producers. Rising labour costs in European countries have led to EU suppliers moving labour-intensive operations to new and prospective Member States, particularly Poland and Romania. Also strongly linked with EU suppliers are Tunisia, Morocco and Turkey, because of their high quality and geographical proximity, which enables fast response to market demands. 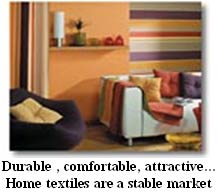 Different factors have driven innovation and development in the three main textile sectors - clothing, home textiles and technical textiles. In the largest, clothing, European manufacturers have traditionally dominated in fashion and creativity, but the sector is now in decline because of high labour costs. Production of home textiles is highly automated and capital-intensive, with labour costs playing a much smaller part, so this sector of production is more stable.

The major growth area is textiles for industrial and technical uses, where novel applications in the car industry, house construction, environmental technologies and sports are generating new, sophisticated and very specialised markets. While technical textiles represent less than 25% of textile output in the EU-25, some countries previously more active in traditional textiles have turned to these new products which now represent up to 80% of textile production in the Nordic countries and 50% in Germany.

Lutz Walter of the European Apparel and Textile Organisation, Euratex, believes that there is a strong need for innovation in all three areas. "In apparel, innovation is absolutely necessary to keep European industry competitive. In technical textiles, innovation is forced both by the fierce competition within Europe and by the requirements of customers - the development of a new car or aircraft often triggers an invention step by the suppliers of the technical textiles that will go into them."

What is being done?

Airbags must be compressible and able to withstand immense pressure 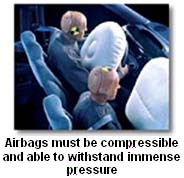 The thousands of small companies in the sector suffer from a shortage of the funds, human resources, training and strategic direction they need to innovate effectively. Many, are, however, attempting to tackle the problem. Walter explains: "While companies are economically constrained to invest in innovation, a lot of them realise that they cannot continue in their old ways and are actively looking for innovation. This is not just a political goal. It comes from the industry itself."

For example, the 'fast fashion' concept pioneered by Zara of Spain streamlines all the production and distribution steps of the supply chain, enabling fast response to customer needs. "If the process can be speeded up in Europe," says Walter, "a lot of the cost advantage of producing in Asia will disappear." Another example is the use of 3D body scanners and web-based data communication between retailer and manufacturer to produce individual made-to-measure garments at a price comparable to that of a mass product. Numerous other new technologies are also emerging - virtual design, advanced robots, optical and electronic fibres and spherical sewing(1).

Under canvas is not what it used to be

The European Technology Platform for the future of textiles and clothing(2) was set up to define the innovation targets and research topics needed to address Europe's textile problems. The platform brings together industry and research experts, to develop specific research and innovation targets in three areas - new textile applications, the transition from mass production to customisation, and that from commodity to speciality products.

At the same time, a wide range of other measures recommended by the High-Level Group for Textiles and Clothing (HLG)(3) included adding to existing projects with opportunities under the Sixth Research Framework Programme (FP6) for co-funding of research, and for training and dissemination of results (see technology platforms). The high-level group will now study companies' access to finance for innovation, and non-technological innovation and industrial co-operation. Proposals for improving intellectual property protection are also being considered.

The most fundamental of the HLG's recommendations in the area of innovation was that the time had now come for a real breakthrough in clothing technology. The labour-intensive nature of garment assembly, and its consequent high costs, plus the unusually high level of faulty products (up to 20%, even with skilled operators) has led to a falling proportion of spending on clothes compared to other consumer goods. The Leapfrog project is perhaps the flagship research project for the sector. It aims at measurable efficiency improvements - 60% time gain through 3D virtual garment design, 80% reduction in machining times for complex garments, and reduction of quality faults and errors from 15-20% to zero.

SMEs in the fashion sector

Silvia Grandi, coordinator of the FP6 Fashion Net project(4), estimates that in some countries up to 30% of SMEs in the textile and clothing sector have closed down in the last two years. "But those that are closing are the less innovative ones," she says. "Among the few answers to the increased competition from Asia are technology, know-how, a faster supply chain, better intellectual property rights management and a quick response. Some companies are now in good shape because they looked in advance at what was the best strategy."

Companies are developing new products and new processing methods to increase the added-value of textile products. An adaptation to a production process which reduces the time or costs needed is an advantage, and increased value-added is essential. The research to achieve these objectives is not usually carried out by SMEs themselves. Typically, clusters of SMEs outsource research to local specialised textile research centres or university research departments. Fashion-sector SMEs in Europe, Grandi says, are more and more keenly interested in learning about opportunities for innovation and how to seize these opportunities without substantial investment, since for many small companies, simple survival is the key issue. But they are taking up opportunities for collaboration. "There is enormous interest from companies in the European technology platform and the national technology platforms - the French textile association IFTH has launched its platform with double the number of SMEs it expected."

Working together within FP6

Wash and brush up - removing grease and grit but not paintwork 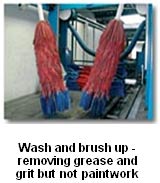 FP6 focuses in particular on SMEs participating in research and technological development, on the grounds that they are vital to European competitiveness and job creation. They are also able to open new markets effectively, particularly where advances in new technologies are involved.

Within FP6, the Economic and Technological Intelligence (ETI) measures for SMEs have special interest for the fashion sector. Fashion Net is one of these, and is complemented by two others relating to footwear (Shoes 5000) and to the 'intelligent textile environment' (ITE). The ITE project is concerned with benchmarking SMEs, making use of self-audit and databases on good practice, and stimulating development of human resources.

Fashion Net's aim is to encourage SMEs in the sector to become involved in FP6 research projects. It works to expand their network of contacts and stimulate the development of collaborative clusters, in order to foster the exchange of expertise, methodologies and good practice. The project is extremely broad, acknowledging the complexity of the production and supply chain.

Working through 16 intermediary organisations in eight countries, Fashion Net will promote innovation and technology transfer to SMEs. The project will use a wide range of tools to encourage SME participation, including two major conferences, and workshops and training sessions in each participating country. Four twinning events will help build working partnerships between areas with similar innovation needs, and an information campaign and a database for technical resources will reach 4,500 SMEs. Many will also benefit from technology audits.

Opening the door to innovation

Grandi estimates that Fashion Net and the two parallel ETI projects will together touch about 30 clusters of SMEs around Europe, so thousands of SMEs will be exposed to the possibilities for participating in international research projects.

These are times of very exciting technological developments - in water-permeable, heat-retentive or electrically conductive fabrics, in software, customised design, and intelligent textiles for specific applications in healthcare, transport, construction or the environment. Thanks to innovation, a traditional European industry is entering a new phase.

Technology platforms arise from the Commission's 2003 action plan for stimulating investment in research(*). Key stakeholders aim to define a strategic research agenda for key industries, which may then be supported under FP7. Some 25 platforms are in operation, in sectors where sustainable growth depends on major research advances. The textiles and clothing platform should help the industry innovate towards new products and more efficient organisation.

(*) Investing in research: an action plan for Europe. Communication from the Commission. COM(2003) 226; http://ec.europa.eu/research/era/3pct/index_en.html

An FP6 project, Leapfrog is working towards a quantum change in productivity, quality and cost efficiency in garment manufacture and supply chain co-operation, by compiling data on new technologies and methods for a fully integrated clothing design and production system. Coordinated by Euratex, it brings together 37 consortium partners from 14 countries to analyse the results of 70 continuing research projects.

WebTEXpert is developing advanced methods in innovation management with a view to increasing the competitiveness of textile and clothing SMEs. WebTEXpert will examine innovation in product development, product introduction, and networking, aimed at the integration of the various production phases. Many of the partners are industrial associations and groupings (IAGs) which will help disseminate the research findings and training widely, to encourage SMEs to look outside their own speciality area.

e-Tailor, an FP5 project, set out to integrate customised clothing production with retail or internet home shopping. The project developed infrastructure based on several new technologies - 3D body scanners, computer-aided design, e-commerce, data privacy - to develop and test the system in action. A European sizing system and an innovative method for customers to visualise the clothes on themselves were developed. A parallel project, e-TCluster, developed standards for these technologies.

By:
CORDIS
Published: Jan 2007
Reuse this Content
Our Clientele