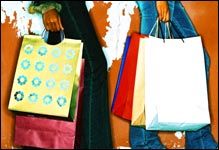 As per the report of the U.S. Commerce Department, there is a bounce in the Retail sales by 1.2 percent during the month of November which is comparatively 1% higher than 07 October and 3.2% higher than 2006 November. This is assumed to be the strongest sales since July, and wipes of the recession anticipated by opinion leaders. Big decline in the credit market and a slump in the housing values were the anticipated reasons for recession. The downside risks that were feared probably a month before is diminished by this retail upsurge. Economists were contemplating that consumers might curtail their purchases owing to the banks tightening of their credit policies. But, the central bank has reduced the interest rates thereby lowering the borrowing costs of the consumers which eventually resulted in a positive increase in the Retail sales.

Categories of auto, restaurant and gasoline rose by 0.1 percent and electronic appliances by 5.6 percent over the last year. Sales of clothing and related accessories increased by 4.7 percent over the last year. General merchandise and other departmental stores saw an increase of 4.6 percent increase over the last years sales figures. Sale of furnitures rose by 1.5 percent, apparel by 2.9 percent and building material by 1.2 percent. Food store sales fell by 0.2 percent. Mail order and internet sales bounced by 2.9 percent. Wholesale sales rose by 3.2 percent which is considered to be the biggest increase in the last 34 years and the rise in gasoline prices is assumed to be behind this upsurge.

Industry enthusiasts feel that the rise in the vehicle sales is due to the appealing discounts offered by carmakers that reduced the financing rates to an incredibly low level. Increase in the gasoline costs substantially made the service station sales to appear stronger.

The overall retails sales figures have a positive increase which indicates a further increase of 4.5 percent for this year. Despite these hopes, industry analysts predict that sales in December might reflect a weaker activity. Economic experts believe that consumer spending will slow down as we go through the year. Deloitte Web casts predict that general merchandise, apparel and furniture would be a bit disappointing. Warm temperature makes the winter wear sales decline and floods in the Midwest would result in closing down of stores. Slump in housing and intense credit crunch might reduce the consumers confidence. A further downturn in sales is predicted during the first three months of the next year. These predictions paint an uncertain sales picture for the forthcoming holiday season. High end consumption helped the retail industry during 2003 and 2004, but is slowing now.

But at the same time, the consumer will still be the lynchpin in the economy. The monetary and fiscal policy, and liberalization of the interest rates might cause a probable change in the consumer spending thereby resulting in an increase in the overall retail sales.