Most of the technical advances in ring spinning were aimed at improving the performance of the existing technology. In recent years, however, a bona fide innovation has occurred. It has been called compact or condensed spinning, because it minimizes width and height of the spinning triangle associated with ring spinning (see Figure 1).

Several experts have described the technical principles of compact spinning that result in a more organized structure without peripheral fibers and with a better twist distribution (Artzt, 2000; Meyer, 2000; Olbrich, 2000; Stalder, 2000). As a result of this enhanced structure, the compact yarn shows higher strength, reduced hairiness, and improved evenness (see Figure 1).

The first compact spinning system to be commercialized is by the Rieter Corporation and is called Com4 spinning. This system was designed and is marketed only for use with extra-long-staple cottons to make only the very fine yarn sizes (i.e., 50 Ne and finer). However, compact spinning systems are also made by Suessen (the EliTe) and by Zinser (the Air-Com-Tex 700), both which are designed to accommodate the full spectrum of staple lengths spun today. These compact spinning systems offer the possibility of using cottons with shorter staple lengths to produce high-quality yarns that heretofore required long- or extra-long-staple cottons.

This paper reports results obtained from spinning various Texas upland cottons, along with some other representative U.S. upland cottons, on both conventional and compact spinning systems. The spinning machines used were the Suessen Fiomax 1000 (for conventional ring spinning) and the Suessen EliTe 1000 (the Fiomax 1000 fitted with the compacting system). The focus is twofold: (1) evaluate the performance of these cottons on modern conventional ring spinning machines, and (2) evaluate the improvements in performance resulting from compact spinning. 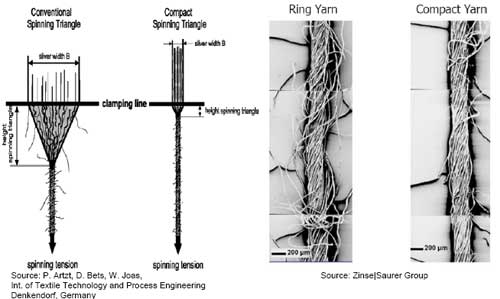 Thirty-one bales of Texas upland cotton were selected in a manner to ensure nine groupings of fibers with different values for fiber length and micronaire. Sampling strata and the resulting number of bales in each stratum are as follows:

The main cause of differing numbers of bales in each stratum (or cell) was the initial bale selection process being based on USDA classing data, but more exacting measurements taken at the International Textile Center shifted some of the bales to different categories. (Each bale was sampled at 10 layers throughout, with HVI measurements being done on each layer. Each measurement consisted of 4 replications of micronaire and 10 replications of length and strength.)

In addition to the Texas bales, 6 representative, high-quality bales were selected from other regions of the U.S. cotton belt: 3 bales from the Delta and 3 from California. Thus, all 6 of these bales fell into the long length category and care was taken not to get micronaire values higher than 4.90 from the Delta. The California cottons were all high-quality Acala varieties. The purpose of these 6 cottons, all of which are deemed appropriate for use on ring spinning systems, was to provide a better frame of reference for evaluating the performance of the Texas cottons.

A statistical summary of the HVI fiber data for all 37 bales used in the study is given in Table 1.

Table 1: Summary of main HVI fiber properties of the 37 bales

Preliminary experiments were done to evaluate the spin-ability limits of a representative Texas bale from each sampling strata. These experiments enabled an efficient selection of yarn sizes to make in the larger experimental design. Results from this made it clear that the compact spinning technology would open the ring spinning to cottons that are not generally considered suitable for this process. Indeed, all of the test cottons could be taken far beyond typical spin-ability limits on a conventional ring spinning system.

The experimental procedure used on all 37 cotton bales is outlined in Figure 2. The yarn sizes for each length group were chosen to enable useful comparisons between the conventional and compact yarns.

The yarn produced at the close of these trials was tested for the following properties:

The 26 Ne yarn size was the only one spun for every cotton bale (Figure 2). Therefore, it is used to illustrate the yarn evenness parameters resulting from the spinning trials (Figure 3). The results are similar for the other yarn sizes.

The 25% and 50% quality levels of the USTER Statistics are shown by the horizontal lines on the graphs in Figure 3, in order to provide benchmarks for the results shown. To facilitate reading the results, the 31 Texas cottons are listed first on the horizontal axis, followed by the 3 Delta cottons and then the 3 California cottons. 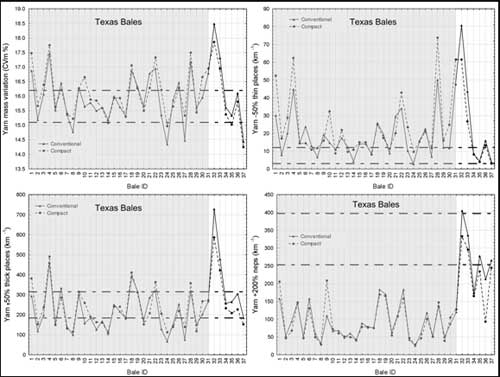 Conclusions from Figure 3 include the following:

-         Compact spinning did not make much difference in the yarn evenness data from the UT3.

-         Most of the Texas cottons compared well with the Uster Statistics; they fared worst for the thin places and best for the neps.

The scatter plot showing the Zweigle hairiness indexes (S3) for conventional versus compact yarns is given in Figure 5. Unlike the results with the UT3, the correlation between values for compact versus non-compact spinning is very low. The hairiness levels of the compact yarns are generally very low regardless of the levels exhibited by the conventional yarns. However, a few of the yarns in all length groups had S3 values that were quite high.

The foregoing observations are corroborated by the analysis of variance results in Table 3. The effect of compact spinning is highly significant, as is the interaction between length groups and compact spinning (Group x Spinning System).

These results show that compact spinning resulted in a highly significant improvement in both elongation and strength of yarns. While the slight deviations of the regression line slopes suggest a possible interaction between compact spinning and these tensile properties (Figures 7 & 8), the analysis of variance (Table 4) shows that the Length Group x Spinning System interaction term is not statistically significant at a 5% confidence level.

The average yarn strength values for each length group and for both conventional and compact spinning systems are illustrated in Figure 9. Again, 26 Ne yarn is used as reference point. While the gap between conventional and compact yarns is somewhat wider for the shortest fibers (length group 1), this difference was not statistically significant. As with the hairiness, it is quite likely that interactions with other variables affecting the yarn strength are occurring besides length groups. An alternative experimental design that allowed inclusion of these other variables might reveal a stronger residual effect for length groups.

A charting of the yarn strengths and elongations from each cotton bale with conventional versus compact spinning is given in Figure 10. It clearly shows that the compact spinning resulted in a generally higher strength and greater elongation for the 37 bales of cotton.

The yarn structure resulting from compact spinning technology appears to get very close to a maximum utilization of each fiber in the yarn bundle. This makes it possible to achieve higher yarn strength from any fibers used. However, the improvements in yarn strength appear to be greater for shorter stapled cottons than for the longer staple lengths. These results made it clear that some fibers that were inadequate for use in conventional ring spinning may be spun satisfactorily on the compact system.

As expected, compact spinning greatly reduced the hairiness of yarns. As with the tensile properties, the greatest reductions in hairiness occurred with the shorter stapled fibers.

Compact spinning did not result in significant improvements in any of the yarn evenness parameters tested with the UT3. Furthermore, this conclusion held for all staple length categories.

Taken together, these results suggest that compact spinning technology may enable us to extend the use of shorter stapled cottons into the manufacture of finer yarns than has heretofore been feasible. It exemplifies a technological innovation that, instead of making greater demands on fiber properties, actually compensates for the lack of certain fiber properties.