A weaving trial with a size-less cotton warp yarn (20/1 Ne) was conducted under mill-like conditions on a modern high-speed, flexible-rapier weaving machine. About 100 yards of a 1/2-twill fabric (64 epi and up to 56 ppi - face down) was produced at speeds up to 500 picks per minute with no warp yarn failure or breakage. This certainly was a very encouraging achievement, which at least demonstrated for the first time ever the "mechanical feasibility" of size-less weaving of 100% cotton yarns on a modern high-speed weaving machine. However, the quality of the fabric produced was not satisfactory, mainly because of the random formation of unsightly, tiny fibrous balls on the fabric surface. The fuzzy ball formation most likely was partly due to abrasion of the warp yarn (yarn-against-yarn and yarn-against-loom-components) and partly due to disintegration of the warp yarn during weaving. The yarn disintegration probably occurred due to some loss of yarn twist by the yarns rapid and repeated extensions and relaxations (i.e., by the so-called yarns up-and-down dancing at a high frequency). Multi-prong efforts to eliminate the referenced fabric defects are continuing. Brief discussions of the weaving trial, weaving performance, and fabric quality comprise this paper.

According to a recent Cotton Counts & Customers publication by the National Cotton Council of America, approximately 75% of cotton produced annually worldwide is utilized in the production of value-added, cotton woven fabrics. This obviously makes the weaving sector of textile industry by far the largest market for cotton fiber. The weaving process almost always involves sizing or coating of warp yarns with a suitable adhesive, such as starch, polyvinyl alcohol (PVA), carboxymethyl cellulose (CMC), etc.. Sizing strengthens warp yarns to withstand/combat harsh mechanical stresses of weaving process and thus facilitates efficient weaving. Since the sizing ingredients, even the traces thereof, can adversely affect quality of subsequent fabric dyeing and finishing, it is imperative that the sizing chemicals are completely removed from the greige fabric at the first opportunity, and that is done by a wet process called fabric desizing. Since both warp sizing and fabric desizing are very costly, complex, and environmentally sensitive, the cotton textile industry obviously wants to eliminate the underlying process of warp sizing, if at all feasible. At the recommendation of National Cotton Council, the Agricultural Research Service (ARS) of the US Department of Agriculture (USDA) has directed research toward size-free weaving. Thus, for the past 3-4 years, scientists at Southern Regional Research Center have been conducting research investigations to explore the possibilities of reduced sizing and, preferably, size-less weaving (i.e., eliminating warp sizing) in the production of cotton fabrics.

About two years ago, we demonstrated the mechanical feasibility of size-less weaving by weaving, under mill-like conditions, about 100 yards of a relatively low-density twill fabric on a conventional (Draper) fly-shuttle loom without any warp breakage or failure. Although this was a significant milestone, the fly-shuttle loom today is almost obsolete in the American textile industry. Accordingly, the research was redirected to use a modern high-speed weaving machine in the investigation of size-free weaving.

Indeed, it is a great pleasure to report here that we now have produced, for the first time ever, without traditional sizing and without any yarn breakage or failure, another about 100 yards of a cotton twill fabric on a modern high-speed, flexible-rapier weaving machine operating under mill-like conditions. This certainly is a pioneering research development, since no such research accomplishment in size-free weaving of cotton fabric on modern weaving machines has ever been reported. However, in the same breath, we must also report that the fabric quality is not yet fully acceptable. Minor, nep-like (however, soft and fuzzy) balls disrupt the fabric surface. These defects most likely are caused by abrasion or disintegration of warp yarns mostly in the reed-sweep zone. A few yards of the produced fabric apparently do not have as many such defects, which practically demonstrates the feasibility of size-free weaving on a modern high-speed weaving machine. Efforts are continuing to understand the fundamentals of size-free weaving and to determine causes and cures of the fabric defects encountered. This paper briefly covers what we did to achieve what we claim we have.

The basic material used in the size-free weaving investigations was Acala cotton. The fiber was processed under almost mill-like conditions and spun into a 20/1 Ne (30-tex) rotor-spun yarn for both warp and filling. The yarn was warped on section beams and then beamed (assembled on a loom beam) by using different treatments on different sections of the warp. The beam was mounted on a modern high-speed, flexible-rapier weaving machine. Different reeds (viz. a conventional reed and a ceramic-coated reed), weaving speeds (varying from 250 ppm to 550 ppm), pick densities (varying from 20 ppi to 50+ ppi), and weaves (twill and plain) were investigated. A total of about 150 yards of mainly a twill fabric was produced. The Plain weaving had to be abandoned, since a weft density of even 40 ppi at 400 ppm presented difficulties. Thus, the initial weaving set-up consisted of producing a cotton twill fabric of a medium-light construction (63 x 40 ends and picks per inch, respectively) at 400 ppm. Additional weaving experiments were conducted with different weaving parameters to determine the effects of two most important weaving variables, namely, the fabric construction (cover factor/pick density) and the weaving speed, by independently varying and evaluating one variable at a time. Basically, the following is what we did to achieve what we did:

1)    Production of a cotton yarn of required structure, characteristics, quality and consistency, which would significantly contribute to attributes that are deemed desirable for size-free weaving.

2)    Development of technology to set the twist-torque or liveliness of warp yarn without traditional sizing.

3)    Modification of surface characteristics of critical components, mainly the reed, of the weaving machinery to minimize yarn abrasion and, consequently, reducing yarn breakages during size-free weaving and thereby improving weaving efficiency and fabric quality. A special ceramic-coated reed was investigated for its weaving performance

4)    Manipulation of weaving conditions and parameters, such as weaving speed, pick density, machinery settings, etc., to study their effects on the weaving performance and fabric quality. Dynamic tensions of single strands of the warp yarns were measured, using a yarn tension-cum-friction meter (See Figure 1). Hundreds of yarn and fabric photographs were captured in real time, using computer-aided techniques.

The 20/1 Ne (30-tex) rotor-spun yarn produced for size-free weaving evaluation had excellent metrics. For example, it had single-strand mean breaking strength of about 500 cN, count-strength product equal to 128 kN/tex, and Uster unevenness CV index of 12.8% with very low numbers of imperfections (viz., the thick and thin places and neps) at classical sensitivity levels. Incidentally, the above metrics of a rotor-spun yarn were better than those of a run-of-the-mill, ring-spun carded cotton yarn of equivalent-size. A ring-spun yarn typically is about 20% stronger than an equivalent and comparable open-end spun yarn. At any rate, the yarn performed very well with no yarn failure during warping and beaming operations.

Regarding the warp preparation for (loom) beaming, the research has shown that a continuous washing of warp sheet (under nominal tension) in boiling water (containing a wetting agent and possibly a small amount of rice soap), followed by drying (on steam-heated cylinders) can adequately relax the yarn and, hence, set/control its twist liveliness. It has also been observed that the referenced wash & dry treatment slightly increases (by ~ 15%) the yarns tensile strength, presumably due to the yarns expected shrinkage in boiling water. At any rate, the beaming process did not present an anticipated problem relating to the yarn twist torque or liveliness, which ensured that the (size-less) beaming process adopted was satisfactory. However, it may also be mentioned that, instead of the adopted, costly yarn washing and drying treatment on a dummy slasher, any other relatively less-expensive method or technique of setting the yarn twist torque (say, by using a HW Yarn Conditioner or a pressure cooker) could be deployed in conjunction with either 1) an ordinary beaming operation on a dummy slasher without heating its cylinders or 2) a modern sectional-warping process (i.e., without using a dummy slasher) to efficiently prepare a loom beam from a size-less warp. The representative scheme for beaming towards the present study is shown in Figure 2.

First Treatment: No application of any fluid &/or heat.

2)    The yarn was sitting on the cylinders, while the latter were being heated from room temperature to 2200 F.

4)    The yarn was sitting on the cylinders at 2200 F, while the water for yarn washing was being boiled in the (size) box.

5)    Third Treatment: The yarn was washed in the boiling water and dried on the cylinders at 2200 F.

7)    The yarn was sitting on the heated cylinders, while the preparation for conventional sizing (control) was being made.

8)    Fourth Treatment: The warp was slashed with the traditional size.

Regarding the actual weaving performance, the mechanical aspects of the weaving process were excellent in the sense that no warp yarn breakage or failure occurred during the entire production of 150 yards of fabrics of different configurations. However, the fabric quality was not satisfactory. Noticeable pill-like, minor defects were formed on the fabric surface, which is objectionable. These fuzzy defects, as shown in Figure 3, most likely were caused by abrasion and, hence, disintegration of the warp yarns in the reed-sweep zone. Visual inspections of the fabrics showed that although some areas of the fabrics had almost negligible defects (see Figure 4), the most areas had highly significant number of those defects, which made the total fabric of unacceptable quality. Multi-directional efforts to determine the underlying cause (s) of these defects and explore possible remedies are continuing. The yarn structure, (size-less) topical treatments, specially coated loom components (especially, the reed); and weaving parameters are the primary items in the current focus. 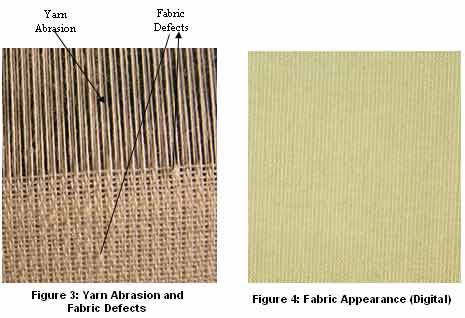 Actual weaving trials and related investigations conducted on a modern high-speed weaving machine have at least demonstrated the mechanical feasibility of producing cotton fabrics without the centuries-old tradition of warp sizing. To achieve efficient size-free weaving, the quality of warp yarn must be considerably superior and consistent in properties to that of the (present) run-of-the-mill type of yarn. It means that the yarn for size-free weaving must be of the highest possible uniformity and consistency and with the least amount of hairiness. Obviously, this is a function of the selected fiber quality, yarn structure, and spinning parameters. Further, a simple washing and/or drying (heating) of a cotton warp yarn seems to be adequate for preparing a loom beam without the traditional warp sizing. A ceramic-coated loom reed also appears to improve fabric quality by reducing the pill-like fuzzy defects mentioned previously. The continuing research is expected to produce new knowledge that is essential to accomplishing commercially successful size-free weaving of especially dense cotton fabrics.

The researchers duly acknowledge the National Program Staff, ARS, USDA, and the National Cotton Council of America, under whose directions and guidance the presented research was conducted. The cooperation of fellow-researchers in the Cotton Structure & Quality (CSQ) and the Cotton Chemistry and Utilization (CCU) Units at the Center is also acknowledged. Special thanks are due to Mr. Jim Sandberg and Mr. Jerome Jeanpierrs for their considerable assistance in the day-to-day research operations.

To promote your company, product and services via promotional article, follow this link : http://www.fibre2fashion.com/services/article-writing-service/content-promotion-services.asp