Dynamic of a rewinder with feedback by tension force

Fundamental part of university education is to create connection of theoretical approaches with experimental or simulation methods for verification. Illustration of practical physical models is cardinal important for experimental exercises engineering, for comparing the computer simulation tasks with practical experiments and with realtime measured signals from technological aggregates. The improvement of theoretical findings is done by physical experimentation during the education process. The laboratory stands allow easy understanding of the various technologies and its control [7-10].

In most devices, technological process is performed by winding different types of materials. The most typical machines of this group are coiling machines in textile production, in the paper processing, wire making industry and etc. Technological process in these devices usually requires constant tension of the winded material (textile, paper, wires, threads and so on) at various velocities [1-5].

The universal stand of the winding band was design in department of control technologies at Kaunas University of Technology (Lithuania) for the educational and scientific purposes. The stand allows demonstrating and investigating the process of the winding band by controlling its tension in two ways. First method is done by measuring the diameter of unwinding roll or by measuring the length of the band loop. The second method is implemented by direct measurement of tension force of the band.

Disadvantage of the first method is that it is able to ensure correct control of the tension force only in the stabilized case. Determining the tension by the dancer loop length, the length of the loop should be somehow measured by the distance meter. In this case, the length of the loop is proportional to the tension force; however the tension of the spring and mass of the rolls of loop forms oscillating chain with the small damping coefficient. Damping of the oscillating motion should be performed by using electronic control devices by introducing the signals of the change in velocity of the length of loop and its derivative into the control system or by using the mechanical dampers [1]. For this reason, additional devices and equipment are required. It is obvious, that the best rewinding system should be the system with the direct measurement of tension force of the band. Therefore, the stand is designed in this way and investigated in this work.

Structure of the lab stand for tight band coiling

The tight band coiling system is a variation of the classical structure of the web coiling. The designed lab stand exactly imitates industrial coiling process at reduced size. The path of the band movement on the stand might be observed in the Fig. 1. The braking torque of the unwinding roll 1 is controlled by electromagnetic friction clutch. The unwinding roll 1 (Fig. 1) reel is mounted on the LENZE electro magnetic braking clutch [11] of type 14.512 with 14.422 control unit 5 used for controlling the breaking torque. The braking torque is adjusted by changing the current in the clutch windings trough the controllable rectifier 5 (Fig. 1). 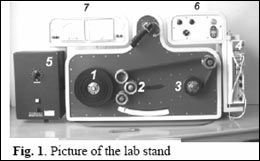 Regulator PCTRL2 of tension of the band is implemented inside the frequency converter 4 (Fig. 1). The desired tension force of the band is passed to the controller trough the connected computer. The feedback signal of the tension force is fed directly to the frequency converter. For the parameters observation and control the blocks with control devices 6) and measurements 7 (Fig. 1) are used. 

Functional diagram of the lab stand

The functional diagram of the lab stand is presented in Fig. 2. The band is coiled from unwind roll UR on the roll WR. The control of the velocity of the tight band is done through the controller (control unit SC) with feedback from transducer ST, reference unit HS through the frequency converter U1, and induction motor M. 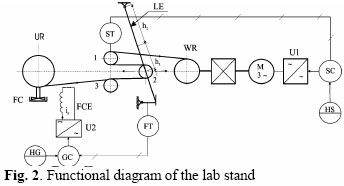 Development of the block diagram of the laboratory stand

Functional diagram of the laboratory stand is shown in Fig. 2. As it was discussed previously, the tension force of the band depends on the friction clutch FC. The increased torque, developed by friction clutch, increases the tension force of the band. As a result the tight band will elongate. Process of band coiling might be illustrated by the simplified kinematical diagram (Fig. 3).

Investigated process of the tight band coiling is made by assuming that the band is elastic and has no weight [4]. In diagram: L is the length of the band for range B when the band is not tight (Fig. 3); l is elongation of band due to tension force. During the stabilized process, the amount of material coming into the range B equals to the amount of leaving material. That does not happen during transient response, because the tension force F and elongation l are being changed.

where l0 the initial elongation of the tight band, at the starting moment t=0 s.

The relative elongation is proportional to the tension force F and it equals to: 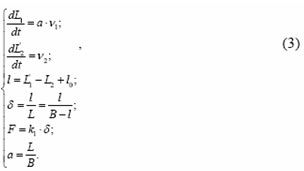 Here D01 is the initial diameter of coiling bobbin; b is the thickness of the band; F is the tension force; v1 is the linear speed of the coiling; v2 is the linear speed of unwind unit. The first, the fourth and the sixth equations of the system are nonlinear. Therefore the tight band system is nonlinear also. The dynamic of the friction clutch and unwind roll section can be described by set of differential and algebraic equations (4).

The dynamics of the rewind roll section have been composed by using structural schemes of coiling process [3] and mathematical description of dynamics of the tight band [4]. In such a way the block diagram of a whole system (Fig. 4) consist of two parts: winding unit (WU) and friction clutch unit (FCU). 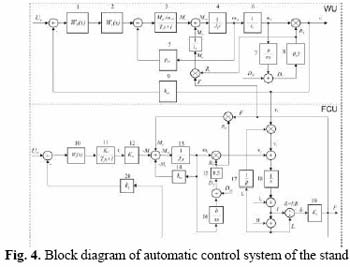 According to the third system of equations 5, 6 and 9 equations are nonlinear. Hence, the system of composition of the tension force of the band is not linear. So, the stabilization, analysis of control and the other investigations of such systems are quite complicated. Therefore, often systems are investigated by using only analytical methods i.e. mathematical modeling. The mathematical model of the lab stand is created according to the block diagram (Fig. 4.) with MATLAB/ SIMULINK package [6]. Tight band coiling consist of electrical drive (frequency converter and induction motor), gearing and winding shaft. To stabilize the linear speed of the winding band feedback loop was used according to linear rolling speed.

Investigation of dynamics of the winding process

The research of dynamics of coiling of the tight band has been done by using the mathematical modeling within MATLAB/SIMULINK. The step response of tension force on the band by using friction clutch has been investigated. The curves (Fig. 5) shows good control quality of the tension force to the reference signal of tension force witch appears ten second after the start. The system response to step of linear speed after 15 seconds is good enough but stabilization of the tension force appears with oscillations.

Similar experiments were performed with the real system, firstly giving step of linear speed and later step of tension force. For the measuring and registering the changes of linear speed and tension force the digital oscilloscope with two input channels were engaged. The scales of the signal measurement are: for measuring force 40 [N] per division and for measuring speed 0.2 [m/s] per division. During the first experiment values of the running coiling processes were as follows: tension force F=const=107.6 [N]; step of linear speed v from 0.3 to 0.6 [m/s] (Fig. 6a). The force F was slightly oscillated similarly to results of mathematical modeling (Fig. 5). 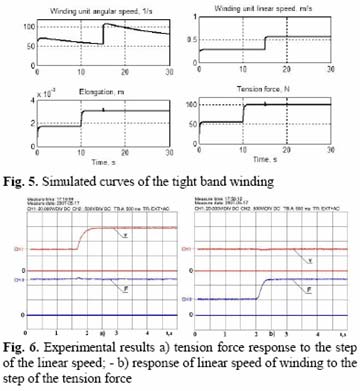 In the second round of experiments the values of the running coiling processes were as follows: step of tension force F from 53.8 to 107.6 [N]; keeping the linear speed v=const= 0.3 [m/s]. Good coincidence of experimental results with results obtained by mathematical modeling was observed (Fig. 6b).

1)    The lab stand with real tide band coiling system was designed and compared with mathematical model. The stand is designed in the way to control the rewinding process with direct measurement of tension force. With this stand there exist several possibilities to demonstrate and investigate various conditions of coiling process for educational and scientific purposes.

2)    The mathematical model has been developed to simulate the real stand for tide band coiling. Mathematical modeling allowed to investigate the dynamics of coiling system and to find the relationship between the tightness of the band, and the coiling speed.

3)    The results of the mathematical modeling well coincide with the real experimental results. Therefore this model might be used for determining optimal PID controller parameters of the real tide band coiling system.

Authors and Department of Control Technology at Kaunas University of Technology would like to thank Lithuanian JSC Lenze for the donated equipment.

6)    Matlab and Simulink are registered trademarks of The MathWorks, Inc. (www.mathworks.com).

Processes of rewinding the tight bands of various elastic materials are very often in various technological lines. The highest process control quality is achieved only by employing feedback signal of tension force of the tight band. Therefore in this article there is proposed structure of control system and strategies for control with direct measurement of tension force in a rewinder system. The proposed control strategy allows stabilizing the tension force neglecting the change of diameters of the unwinding and rewinding rolls. The tension force of the tight band is controlled by using the electromagnetic friction clutch while the linear speed of coiling is adjusted by frequency drive. For the proposed system the performance evaluation and adjustment the equations of nonlinear control system with three closed loops are developed and modeled by using MATLAB/SIMULINK program package. The results of the mathematical modeling have shown good coincidence with the real experimental results. Therefore the mathematical model might be used for determining optimal PID control parameters of real tide band coiling system. Ill. 6, bibl. 11 (in English, summaries in English, Russian and Lithuanian).

The authors are associated with Kaunas University of Technology, Department of Control Technology, Kaunas, Lithuania.