A group of scientists from the ITV Denkendorf headed up by Dr. Thomas Stegmaier have developed a fabric whose surface remains dry under water. A thin layer of air surrounds the textile and keeps it dry.

A first prototype can already remain underwater for as long as for 4 days without getting wet much longer than conventional high-tech textiles. For the first time it was possible to stabilise the air layers under water just by using a specific surface structure. The aim of the current research activities is the development of new swimwear, which dries extremely quickly, thus considerably improving wearer comfort. The jury of the NRW university competition patente Erfinder(ingenious inventors) awarded a patent that protects this development as a particularly innovative invention as well as having high commercial potential. The innovative surface was developed in cooperation with scientists from the Nees Institute, Bonn, Germany. Apparently, the new development has also generated a lot of commercial interest: major international swimwear manufacturers have already expressed a great deal of interest in translating this innovation into a marketable product.

Natures toolbox provided inspiration for the development of this fabric. In nature, surfaces which remain dry when immersed in water are relatively commonplace. Organisms like Ancylometes bogotensis (fishing spider) or Aphelocheirus aestivalis (stream-dwelling bug), two water insects which live on/under the water, possess this useful effect. Underwater, the insects are surrounded by a silvery layer of air and are completely dry when they return to the water surface. The functional principle is based on a hairy surface structure. Ancylometes bogotensis has numerous short, curled hairs, whose hook-like structures remain bent over the air layer, keeping it in place even when surrounded by water. 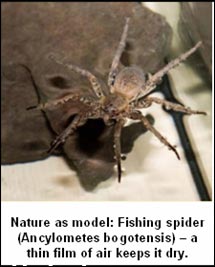 Inspired by nature, the bionics research group initiated a series of tests with different textile surface structures. The scientists idea was not simply to copy the animal surfaces, but to transfer the decoded basic principles from nature to technical products.

The broad knowledge in fibre and structure technology available at the ITV Denkendorf was extremely helpful in the search for the optimal structure. The team of scientists was finally able to come up with a fabric that forms a layer of air on its surface, which surrounds the textile and keeps it dry. The surface has a dense, bouffant, hairy and elastic structure. The specific arrangement and bent design of the filaments is able to capture the tiniest air bubbles, exactly like nature.

The flexibility of the filaments can withstand some mechanical stress caused, for example, through current movements, so that the layer of air also remains intact during movement. Underwater, this layer of air shines silvery in the same way as animal surfaces immersed in water do. To enhance this effect, the manufactured fabric is also highly water repellent.

A look into the future 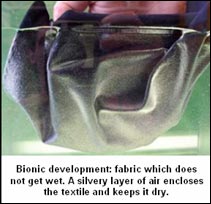 The first prototype is still too stiff to be used as swimwear. However, the team of scientists is working hard to develop more flexible structures. Tests with different fabric structures also include tests on knitted fabrics - used for trendy swimwear. At the same time, the scientists aim is to optimise the ability to conserve the layer of air even in the case of vigorous movement. The first prototype would not be strong enough for an active swimmer.

The basic principle provides ideas for further product ideas. In contrast to the initial design, future developments will focus on significantly reducing the friction which is caused by the layer of air. Shipbuilding, for instance, could be a suitable area of application. In this case, the minimisation of friction could considerably reduce the consumption of fuel. The question relating to the regeneration of such systems still needs to be solved. Perhaps natures toolbox might also provide an answer to this question.

By: New Cloth Market
Published : May 2008
Reuse this Content