Clothing is one of the basic necessities of human life. It plays a significant role in all round development of an individual, which is also true in case of physically challenged. Keeping in view the importance of clothing in human life, three sets of garments were specially designed for cerebral palsy children. Comfortability and acceptability of these specially designed garments, were assessed by wear study procedure. It was found thaI among the designed garments shorts with wraparound flap was first in order of preference followed by capri with suspenders and trouser with side way zipper opening. The special features incorporated in the newly designed functional garments was found to be most comfortable and practicable. All the mothers of five cerebral palsy children expressed that the specially designed garments were not only attractive but also functional and can be used as casual wear or outer wear.

Clothing has been recognized as a primary need of mankind throughout the world. It is one of the most personal components of daily life. Clothes render on individual a distinct identity.

These give a feeling of self confidence and comfort and the wearer feels physically, psychologically and socially at ease.

Uncomfortable clothes can take away the joy of living. This is equally true for special group, whose needs are greater because they need more comfort and convenience as compared normal people to become independent.

Special group consists of people who deviate from normal with respect to physical, mental and social characteristics to such an extent that they need unique care in clothing, education and training and cerebral palsy is one among them.

Keeping in view the needs of cerebral palsy children, attention is being focused on normal children clothing as they are easily available in the local market with wider range of sizes and latest styles but no attention is being paid to clothing of special group as they are totally dependent on their mothers as far as clothing is concerned. In other words the special group shall be considered as one, whose clothing requirement is different from an average or normal group.

The children with cerebral palsy face number of problems while performing their daily activities, thus use support of crutches, guards, spints, calipers and wheel chair according to the severity and requirements. Parents play an important role in rehabiliting these children. These clothing problems may be minimized by designing suitable garments for the needy as well as to supplements their personality. Special clothing designed with self-help features encourages the child to dress and undress himself or herself, thus making him or her independent that inturn builds self confidence. Such clothes can be made attractive and fashionable contributing to physical, psychological and emotional feeling of children.

The study was conducted in Usha's school for exceptional children Hubli, which caters to the educational and play activities of physically and mentally challenged children. For the present study the researcher selected the girl children affected by cerebral palsy (spastic quadriplegia) falling in the age group of 8-12 years.

The demographic information about cerebral palsy children and their family was obtained by self structured schedule which was administered on the mothers. Further additional information on clothing problems and the constructional details to be incorporated in the special garments was also collected.

The second part of the study encompassed designing and construction of special garments for cerebral palsy children.

On the bases of survey results, three sets of garments were designed and constructed according to the individual body measurements of the subjects.

Finally these specially designed garments were given to each child (sample size -5 children) for wear trials and wear period for each garment three days. After wear trials the investigator personally interviewed the mothers of cerebral palsy children by administering the self structured schedule and gathered the information acceptability, comfortability and attractiveness of the newly designed functional garments.

The findings of the present study are discussed here below:

All the children were afflicted with total physical limitation of both upper and lower limbs. These man be due to high fever, convolution, strong and heavy medical dose and sometimes it was congenital. 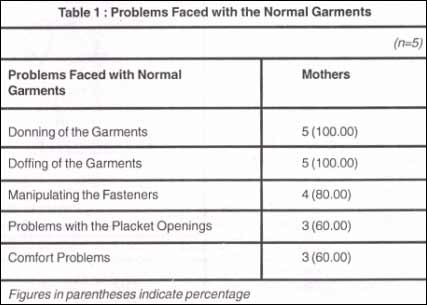 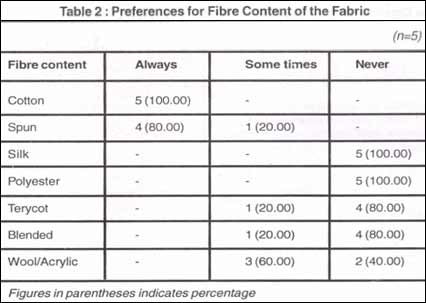 The results presented in Table 1 indicated that, all the mothers faced the problems of donning and doffing of the garments, manipulating the fasteners (80.00%) and style of placket openings (60.00%). Invariably they did face one or the other problems related to comfort properties of the garments (60.00%).

Mothers expressed that the children could express discomfort with respect of neckline, collar, sleeve type, fitting and so on. The reason is clear that there is no segment of special garments existing in ready-made industry that caters to the special clothing needs of cerebral palsy children.

On the other hand the local tailors were unable to design special garments for these children.

It is evident from Table 2 that cent per cent of the mothers always preferred cotton garments. Further, it was found that majority of the mothers some times did prefer wool/acrylic (60.00%) but, the entire mothers did not opt for silk and polyester fabric for their children's garments.

This may be because of aesthetic features like elegance, colours, patterns and prints but also user friendly features like comfort, intimacy of the fabric like good absorbency, breathability, non irritant and good conductor of heat. 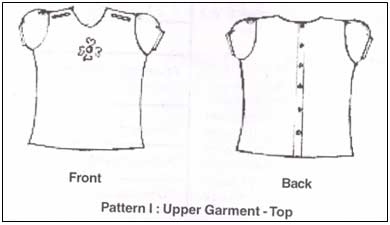 Pattern I: Capri
with Suspenders
Top

A cotton top with full length up to pelvic bone, was constructed with puff sleeves, medium low round neckline (base of the neck), full centre back opening fastened with press studs. Two loops on either side of the shoulders were made to slip through the suspenders from back to front. Patch work was the design on the centre front as a decorative feature. 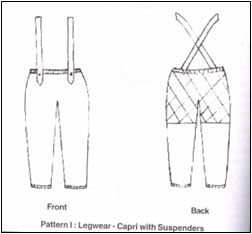 The Capri is constructed with printed cotton fabric up to ankle length of light pink colour. It is held securely at waist by elastic band so also provision for suspenders was made to fasten at the front waist by fully elasticised slipping through shoulder loops.

Another special feature of the garments was soft yet pliable reinforced padding given at the back from waist till the mid thigh and loose yet comfortable elastic band with sufficient fullness around the flare. 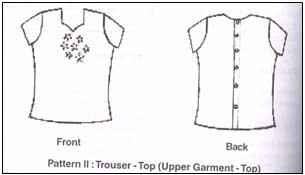 A cotton top with medium low necklines, simple set in sleeve with full back opening, fastened with press studs was constructed. Hand embroidery was the surface embellishment which enhanced the beauty of the garment.

The trouser designed and constructed with fully elastic waist band to secure at waist line. The special feature incorporated in the trouser was the boot cut with side seam zipper opening at the outer leg to facilitate the use of spints, while exercising. 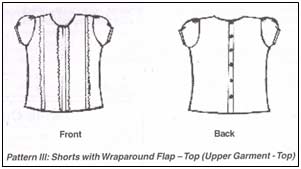 A cotton top with medium low necklines, puff sleeve and full back opening, fastened with press studs was constructed. The top was decorated with lace work. 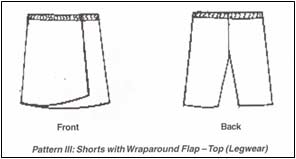 The leg wear designed in reality was a shorts up to knee length with elastic waist band. But a wrap around skirt effect was given only in the front by additional layers of circular wraps to avoid undue sight of the children wile crawling. In fact this garment appeared like wraparound skirt from front but shorts from back.

Opinion of the Mothers about the Specially Designed Garments

All the garments are not only functional but could also be used as outer wear, and casual dresses. In fact mothers expressed that these garments though differ from normal ones in the constructional details but not in general appearance.

This may be due to no such special garments were available in the local market that could provide comfort to cerebral palsy children. Though features like padding in seat region, suspenders for the capries, side seam placket opening for pant, centre back full opening were incorporated in the special garments, were also made appear as normal.

The special features incorporated were more of functional in nature than decorative, hence appeared similar to normal garments.

Opinion of the mothers about special features in the newly designed special garments. In case of upper garments the special features such as back opening and loops at the shoulders were highly functional.

Further all the mothers opined that, the special features which are incorporated in the leg wear viz., fully elasticized waist band, reinforced padding from waist up to mid thigh, suspenders, elastic band at flare, side seam zipper from ankle to knee and shorts with wraparound flap were highly functional in the newly designed functional garments.

Because, back opening was highly functional for easy and quick donning and doffing of the upper garments, where as shoulder loops kept the suspenders in the correct position and helped to hold the lower garment at waist line.

Elastic waist band was the most appropriate secure to manipulate easy donning and doffing of the lower garments.

Since all the children most of the time crawl, padding was given to the leg wear from waist up to mid thigh with an intension that it would provide softness, support and protect the seat. On the other hand suspenders were used to hold or support the garments since the children have very weak, thin and narrow waist, which needed special attention.

Elastic band with sufficient fullness around the flare of leg wear was very much practical since both the legs were well defined to slip on and slip off the lower garments, no hurdles while walking. In the trouser, side zipper from ankle to knee was specially adapted for easy wear of the spints.

The third leg wear was so well designed that in spite of being a shorts, it appeared like a wraparound skirt from front view. The feature of wraparound flap was adapted to avoid awkwardness or odd sight of the children while crawling.

The reasons quoted were that the first two garments were much more accepted with respect to aesthetic appearance, comfortability, durability and functionality compared to trouser - top because the boot cut would easily get soiled/dirty while toileting.

Veena K. Shirgavi is a student of Sr. M.H.Sc and Dr. Shailaja D. Naik is a Guide and Professor & Head, Department of Textiles and Apparel Designing College of Rural Home Science University of Agricultural Sciences, Dharwad

By: New Cloth Market
Published : May 2008
Reuse this Content