Jawaja is a small town located in the district of Ajmer 70 kms towards northwest direction, and its main occupation is agriculture with a low literacy rate. No craft other than leatherwork is practiced so broadly in Jawaja, though handloom weaving, embroidery work (kashida) is also found there. In fact even leather work is on its verge of extinction as only one family is involved in this practice. About the craft and its development

Rural University and a new concept of education rural development were initiated by Professor Ravi Matthai, first director of the Indian Institute of Management (IIM), Ahmedabad. Rural University team then worked with people of the Jawaja block, which included about 200 villages with a population of approximately 80,000 people. Jawaja is a region of high poverty and no resources; some people knew spinning and weaving and owned few looms. Weaving and leatherwork became the source of economic development, and later people understood relevancy of design education into this rural context. 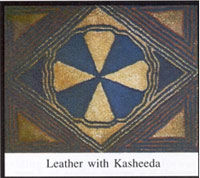 There is no significance of leather craft as such, it is not an aesthetic/a religious/a social act but it is merely a means of earning livelihood.

Sourcing of material-raw leather (locally called kachha chamda) is sourced from Nasirabad. Production is order based. Buyers contact the association authority and then they get orders. In Jawaja association fixes prices and thus there is very less flexibility.

Harmada is a remote village in Ajmer, a district of Rajasthan. This region is completely under developed with a very low literacy rate. There is no tele- network and no mobile network found. Harmada is around 3 km from Tilonia; they have very little exposure to other parts of the country.

This craft of leather products was started by Aruna Roy who is an active member of SWRC (Social Work and Research Center Tilonia). She gave the training and taught villagers the process of converting raw leather into the finished products. Her training helped these villagers to earn their livelihood who were initially involved in agriculture, which didn't fetch them enough money. This craft is done with the sole purpose of serving a practical need. Artisans have started working for the export market; they supply to Mumbai, Delhi (Connaught Place, Janpan etc). These artisans are satisfied with their work. There is no competition among these artisans. They all work together in one house; it is like a small unit. Thus it can be said that the craft is evolving.

The basic difference between the leather work of Jawaja and Harmada is that the artisans of Harmada specialize in making leather chair, wallets, hand bags, jootis which have hand embroidery [kashida] done on it. Kashida work is mainly done by females in their houses. Apart from Kashida work, they do patch work and sequins work on jootis. Artisans get wages of around Rs 50 per day. 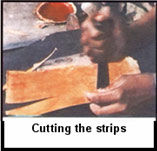 They get leather sheets from Delhi [Karol Bagh market]. Initially artisans used to get raw leather and all the processing of raw leather was done there itself. But now they got processed leather sheets in order to save on time and other tools and equipments are locally available and are repaired in the village itself. Keeping in view the large natural resource base of hides and skins produced in the State, RUDA has taken up integrated package by providing all backward and forward linkages in selected areas like Mangrol (Baran), Manpur-Machedi(Jaipur), Beawar(Ajmer) and Nagaur; as to develop them as areas of excellence. An integral part of the strategy is to organize the artisans into producer groups and providing them incentives, as well as creating proper infrastructure facilities by setting up several Common Facilities Centre for development of leather shoes, goods and garments.

The authors are associated with Pearl Academy of Fashion.