Torque is a turning or twisting force and differs from tension which is created by a straight pull. Torque can be thought of informally as 'rotational force'.

In physics, a torque (τ) is a vector that measures the tendency of a force to rotate an object about some axis. The magnitude of a torque is defined as force times its lever arm. Just as a force is a push or a pull, a torque can be thought of as a twist.

E is the energy

θ is the angle moved, in radians.

Relationship between torque, power and energy

If a force is allowed to act through a distance, it is doing mechanical work. Similarly, if torque is allowed to act through a rotational distance, it is doing work. Power is the work per unit time. However, time and rotational distance are related by the angular speed where each revolution results in the circumference of the circle being traveled by the force that is generating the torque. The power injected by the applied torque may be calculated as:

Conversion to other units

Where rotational speed is in revolutions per unit time. 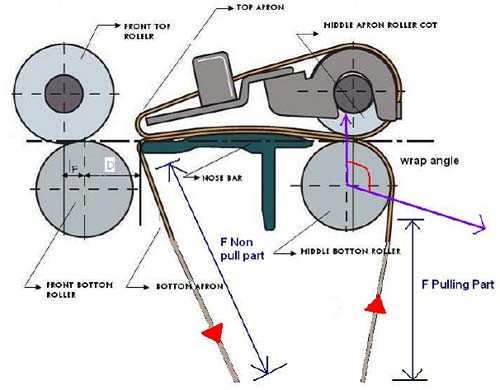 The torque (T), transmitted from a middle steel bottom roller to an apron can be given by the formula:

The torque can now be written as:

From this equation can be read:

Aprons in the drafting system along with other components play a vital role in deciding the overall spinning performance and yarn quality. Increased in output of ring spinning machines over the years is phenomenal. Nearly 40% increase in speeds of spindle had been happened. Still life span of a drafting apron is defined by the frequency of flexing, has remained virtually the same, the improvements in rubber polymer are evident.

In general drafting aprons are made by NBR based synthetic rubber. There are also other materials involved like leather, synthetic leather, poly urethane, PU coated materials in apron manufacturing. Still synthetic rubber is an ideal material for this purpose because of its long life and resistance to fibre finishing additives and abrasion.

A typical rubber compound for the outer or inner layer of an apron contains the base polymer as well as 15 additives, which also affects the various physical and mechanical properties.

Basically, aprons made of synthetic rubber are made in endless tubular form whereas leather aprons are made in open strips and subsequently glued together to form an apron, the advantage of tabular construction is the lack of seam and uniform along its circumference.

Aprons used in ring frames and speed frames are generally made out of three layers:

The outer layer of spinning apron is finish ground to provide it a defined roughness for optimum fibre guidance. The maximum load is placed on traverse zone. Here abrasion and the pressure from the bundle of fibres lead to smoothing and formation of groove. The duration of time for which an apron can create optimum yarn quality mainly depends on the rubber compound. Resistance to abrasion and elasticity determine how long the initial structural geometry of an apron outer layer lasts.

The reinforcement layer gives the apron its overall dimensional stability. Current methods with well defined parameters for this layer achieve very tight inner diameter tolerance. Thus plays an important role in determine top and bottom apron life span. At the same time reinforcement layer of bottom apron must have nominal break point so that due to some mechanical reasons if the apron is clamped between the bottom steel roller and the nose bar the tensioner unit must not damaged?

Optimum slippage over cradle nose bar (see fig 1) is expected of the inner layer. It must also with stand abrasion and scratch of the knurled bottom roller. The inner layer should also provide good friction, so that both aprons are consistently driven during drafting.

In todays scenario, the number of spindles on short staple spinning machines has continually increased; the energy consumption of the top arm weighting arms was initially more. The idea is have low torque value aprons so that the whole machines energy utilization is balanced.

Low apron torque values helps in achieving it. Currently, to achieve improved yarn regularity of the drafted strand, closer spacing on the top arms are used so that the net load on bottom aprons is very high. At the same time high draft ratio is kept in most of the ring frames that again adds load to apron zone .Hence greater flexibility of apron is needed so as to accommodate the narrow radius at the nose bar (A typical bottom apron in cotton spinning ring frames makes 7000 9000 turns per day at the nose bar ) . To increase the apron flexibility and reduce the tension at the point of turn around nose, apron thickness can be reduced, without losing the elasticity of the outer layer.

Initial start up of long ring frame Vs torque value of apron:

Whenever a Ring frame is stopped for doffing or any other reason the entire drafting zone components come to rest. During re-starting, the steel bottom rollers must accelerate to reach its maximum surface speed. Based on the draft distribution or draft ratio. The crucial part is that each bottom apron having 30 mm width and a wrap angle of more than 90 must accelerate to match the surface speed of middle bottom roller. Otherwise; the entire middle zone will lag behind actual speed momentarily.

The energy consumption / spindle / drafting zone will increase if the torque value of the apron is high. Since Torque value is directly proportional to power consumption

If the torque value of apron is less then according to the above equation the energy consumption / spindle / drafting zone will decrease relatively.

Dyne - In physics the dyne is a unit of force specified in the centimeter-gram-second (cgs) system of units, symbol 'dyn'. One dyne is equal to exactly 10.5 Newtons. Further, the dyne can be defined as 'the force required accelerating a mass of one gram at a rate of one cm per second2

Kilogram force - The deprecated unit kilogram force (Kgf) or kilopond (kp) is defined as the force exerted by one Kilogram of mass in standard Earth gravity. 1 kgf= 9.80665 Newtons.

Pound force - Is a non Si unit of force or weight lbf or lbf. The pound force is equal to a mass of one avoirdupois pound (which is defined as exactly 0.45359237 kg) multiplied by the standard acceleration due to Earth gravity.

The author is Manager - Application Technology in Inarco Ltd, Coimbatore