Metamorphosis of the Indian handloom sector

Evidences of weaving practiced in India are found in epics like Ramayana and Mahabharata that speak in length about the craft. Needles of bone and woven cotton are seen in ancient civilizations of Mohan-jo-daro, and Harappa. Even ages before, Indians exported huge quantities of cotton and silk to other countries. Pieces of cotton fabrics were discovered at the Egyptian tombs at Fostat. Huge quantities of silk fabrics were exported to China, and Indonesia. Cotton and chintz fabrics were also exported to Europe and Far East.

Types of Weaving Traditions in India: 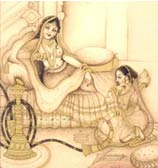 The period of Mughal rule in India, had a considerable influence on the weaving pattern, designs and colors used. Persian motifs like tulips, iris, and fruits were used in Indian traditional weaves. Hues of Persia like dusky pinks, turquoise blues and emerald greens found their way into Indian weaves during the rein of the Muslim emperors. Their courtrooms were filled with people in resplendent royal robes with heavy zari works. Mughal Emperor Aurangzeb had an over whelming passion for 'Jamdani' fabrics, that the fabric was even known as 'Aurangzebi'. Benaras, the delicate cotton muslin, which is globally admired for its finely woven texture was very popular during the Mughal era. This is adored as the 'King's Muslin'. It is believed that when Buddha died, his body was wrapped in this muslin fabric.

This sector is the second largest rural employment provider in India, next to agriculture; providing direct and indirect employment to more than 30 lakhs craftsmen. It contributes to 23% of the total cloth produced in the country. An NGO survey states that there are more than 38, 00,000 handlooms in the country. There are approximately 15, 00,000 domestic handlooms in the north-eastern states. Andhra Pradesh has almost 3, 20,000 handlooms. In Andhra, 5, 00,000 families are directly, and 20, 00,000 families are indirectly involved with the handloom industry. Major centres are concentrated in coastal Andhra, Telangana, and Rayalseema.

Handloom products from India enjoy international reputation and have a good demand in the global market, contributing a significant portion of the nation's GDP. Sheer love of handloom products, its cultural richness and heritage, and exquisite designs and patterns have brought this industry into global spotlight. Apart from this, there are many other sectors like financial, marketing, maintenance, and transportation services that benefit from the handloom sector. Handloom centres also serve as tourist spots attracting a large amount of foreigners. Thus tourism industry is also indirectly benefited.

Every coin has two sides. The other side of the 'handloom coin' depicts a gloomy picture of the industry. Despite all the chimes and laurels that it is the second largest industry of the country, handloom sector is now considered as a 'sunset' industry due to modernization, mechanization, and sophistication of machineries. Some states like Kerala, Tamilnadu, Orissa, and Assam are well developed in this craft, whereas in many other states, it is confined to the needs of the household. This leaves the craftsmen in a dismal state of their livelihood. Wages of the craftsman have not increased during the past 15 years. This keeps them below the poverty line pushing them to a 'hand to mouth' existence. Buying of raw materials like dyes, yarns etc pose a problem. Increasing prices of primary materials like cotton, silk, jute are out of bound for the weavers. Indian Government has come up with some programmmes like modernization and upgradation, input support, employment generation programmes, market support etc. Many schemes are introduced to assist handloom craftsman and enable them to upgrade their skills.

Handloom exemplifies the richness and diversity of India, and is a part of its cultural heritage. Adequate measures should be taken, and the industry craftsman should be encouraged and their skills should be polished so as to keep consistency of the prevailing tradition.