Weaving of 3Dm fabric in handlooms 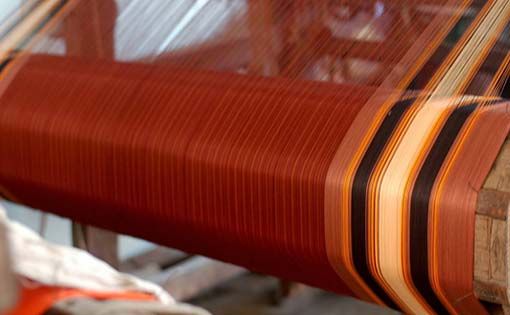 Non-woven, Braiding, Weaving, Knitting and Laminating Principles may form the 3D Fabric. Out of these, the Woven 3D fabrics are formed by two methods. 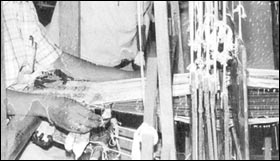 Special looms are required to operate the warp threads in 60o angle for weaving 3Dr-3 Directional fabrics. But the 3 Dimensional -3Dm- fabric can be woven by using ordinary loom with usual weaving principle-shedding, picking, beating - by having multi layers of warp and multi layers of weft. Even though the treble cloth with 3 series of warp and weft could be called 3Dm fabrics, in general, minimum 4 series of warp and weft are used in weaving to form several layers, one above the other to get the sufficient thickness resulting into 3 Dimensional fabric.

The length way and width way cross section of "3 weft layer 3Dm" fabric woven by using 4 series of warp and 3 series of weft is shown below: - 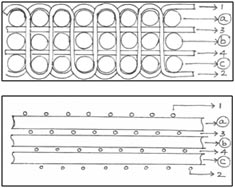 By looking into the cross section, any "Fabric Structure Designer" can very well say that 3Dm fabric is a "Simple weft Tapestry" fabric.

As per the principle of weft Tapestry fabric, to weave 3Dm fabrics, it is required to use one series of stitching warp and multi series of separating warp as per the number of layers to be formed.

The following points are to be understood from both the cross sections: -

The first layer weft (Face) - shown as "a" - lies between the stitching warp (shown as 1) and first separating warp series (shown as 3).

The second layer of weft (Middle) - shown as "b"- lies between the first and second separating warp series (shown as 3 and 4).

The third layer of weft (Middle) lies between the second and third separating warps series and so on.

The last layer of weft (Bottom) has shown as "c" Iies between last separating warp series and stitching warp (shown as 4 and 2).

No. of healds required to weave the 3Dm fabric can be calculated as below:-

Stitching ends are always taken in two healds to operate these ends from top to bottom and from bottom to top simultaneously.

The operation of healds to produce 3 weft layered 3Dm fabric is as follows:-

The three weft layers are denoted as:

The length way and width way cross sections of 5 weft layer 3 m fabric are shown below. 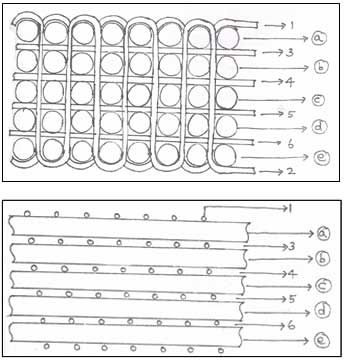 The operation of healds to produce 5 - layered 3Dm fabrics are as follows.

The five weft layers are denoted as:-

The thickness and weight of the 3Dm fabrics is directly proportional to the number of weft layers used, and thickness of the weft.

The 3Dm fabrics are used for reinforcing of different material in one fabric. Cotton used in top and bottom layer with jute used in the middle layers, gives the fabric very good softness on the face and backside because of cotton and at the same time gives required strength and hardness in the center because of Jute.

The thickness of the fabric is useful for many industrial purposes such as heavy load bearing and hammering.

It is concluded by stating that Handlooms with multi healds and treadles can be easily used to weave 3Dm fabric to meet the increasing demand of these fabrics in the recent past both in local and export market.

Hence, Weavers' Service Centre, Ahmedabad has already undertaken the development of different varieties of 3Dm Fabrics to give guidance about the technique of manufacturing of these fabrics to the Handloom weavers who are already in the production of Floor carpets in and around Ahmedabad.

By:
R.G. Panneerselvam
Published: Sep 2008
Reuse this Content
Our Clientele