The WSA Show: The Global Footwear & Accessories Marketplace- Part I 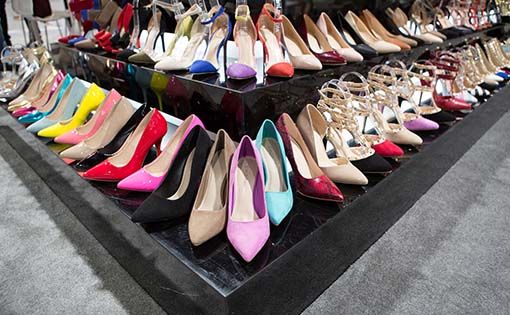 The footwear and accessories marketplace was in full-swing this past week at The WSA Show and The Collections at WSA, held in Las Vegas. The industry's biggest names were out, and business flourished in every market category, from men's, women's, and kids' shoes, to jewelry and accessories, with exhibitor participation that included category leaders, emerging brands and rising stars. An estimated 29,515 participants from 99 countries/territories were in attendance in Las Vegas, representing a 2.8% increase over the February show.

"We are extremely pleased with the participation in this edition of the show," said Diane Stone, Chief Operating Officer. "We approach buyer recruitment by talking one-on-one with the top-tier retail organizations that are important to the brands, and 86% of those retail organizations attended the show. Like all businesses today," Stone continued, "some of their teams were smaller in line with controlling their costs, as we all are, but their buying power was here and that's what's most important."

On the first day, the show floor was buzzing when singer and actress "Fergie" appeared at the Brown Shoe Co. booth to launch her new footwear collections: Fergie and Fergalicious by Fergie. The Fergie collection boasts sophisticated, sexy shoes with a glam rock influence while the Fergalicious by Fergie line embodies the popstar's fun and funky pop rock edge. Both lines will make their in-store debut for Spring '09.

Major brands such as Steve Madden and Geox benefited from being at The WSA Show. "The WSA Show has been a very successful show for us," stated Phil Pine, National Sales Manager, Steve Madden. Kitty Bolinger, Director of Sales, Geox, mirrored Pine's sentiment by saying, "We're very pleased with the attendance to the show. We maintained a strong, consistent traffic flow to our booth and received tremendous response to our womens sandals."

"Exhibiting in The Box has been a terrific experience for us. As a new brand, it was the perfect venue for buyers to discover our product, and with a very minimal investment, we were able to make a really big impact," said Joe Ponce, president, Velvet Angels. "The Box really has become the venue that WSA envisioned it to be."

Attendees from all 50 states, plus Guam, Puerto Rico and the U.S. Virgin Islands, were among those to walk the show floor alongside buyers from 99 countries/territories from all continents. The global buyer recruitment efforts were strengthened significantly for this show, and in addition to the efforts of WSA's Retail Relations Team, The WSA Show and The Collections at WSA were recently accepted into the U.S. Department of Commerce (DOC) International Buyer Program, which accepts only 32 tradeshows per year.

In addition to hosting international buyers, the DOC was on hand to field inquiries from U.S. brands seeking international distribution. According to Joe English, senior international trade specialist, "We have had more inquiries at this show from U.S. companies seeking to establish or expand their global reach than at any show I can remember, and we at the DOC are pleased to find companies in the footwear industry so vigorously interested in transcending borders to build their businesses."

Also, returning after its debut last February was the Materials at WSA category, which continued to add a whole new dimension to the floor by rounding out WSA's comprehensive offerings to help service the supply chain needs of manufacturers and retailers. Materials at WSA offered industry leaders access to booths from over 70 exhibitors, educational workshop programs, hands-on demonstrations and an innovative trend area featuring fall/winter '09/'10 forecasts.

"Despite the economic challenges at the moment, at the end of the day it's all about the product," added Stone. "When editors came to talk to me during the show, I asked them what they thought of the product offerings and many told me they saw excitement. I strongly encouraged them to write about it because that's what retailers need so they can excite customers who will buy things that are new things they don't have. We are part of an industry that's great at innovation and creativity and the most exciting brands and retailers will make their way through these turbulent times. Everyone who mattered gathered in Las Vegas and I am confident that this industry's energy charged them up. We had numerous exhibitors who had a terrific show due in large part to their outstanding product offerings."

The WSA Show is gearing up for the next marketplace, which will take place at the Mandalay Bay Convention Center and the Sands Expo Center February 12 -14, 2009. The Collections at WSA, making its debut in a 3-day format in February '09, will continue to be held in the suites at The Venetian.

About The WSA Show

The WSA Show is the world's largest and most comprehensive footwear, handbags, and accessories marketplace, offering a 360-degree viewpoint of the footwear industry. The twice-yearly event in Las Vegas attracts more than 37,000 participants from 95 countries in 2.1 million square feet of space. The Collections at WSA, an exclusive premium footwear and fashion jewelry show within The WSA Show, features 350 luxury footwear, handbag and jewelry designers from around the globe in an exclusive upscale setting. Materials at WSA, which launched in Las Vegas in February 2008 alongside The WSA Show, further expands the breadth of this industry marketplace to include the supply chain by focusing on materials, design, components, technology and sourcing alongside the finished product, becoming easily accessible to brand and retail leaders. For more details, please visit www.wsashow.com.