Electrospinning past present and future 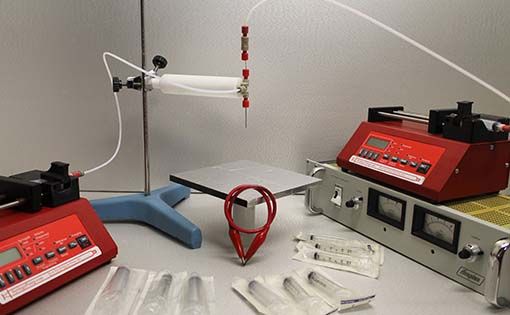 In recent years, the term "nanotechnology" has spread across the globe like wildfire. Millions of dollars in research grants and investments are being devoted to making products less than 100 nanometers in size. Unlike many other aspects of the traditional textile industry in the United States which is said to be on death's door, "nanotechnologies" are generating quite a bit of interest. Within the past decade, it has been "rediscovered" that you can produce extremely small fibers (nano-fibers) using a process called electrospinning.

Electrospinning is not by any means a new discovery. Its roots go back to the early 1930's when the first patent was issued. Simply stated, Electrospinning is a process that uses the electrostatic attraction between a charged polymer and a grounded or oppositely charged collection plate to produce extremely fine fibers ranging in diameter from a few nanometers (<10) to several micrometers (>50). Recent developments have shown that it can be performed on polymers in both the molten state as well as in solution. 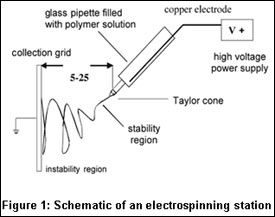 The polymer is held in a syringe or other type container as shown in Figure 1.

The charge can be applied directly to the syringe so that when polymer passes through, the polymer receives a surface charge similar to that applied to the syringe. As the voltage to the system is increased, the electric field's strength being generated eventually becomes greater than the viscoelastic properties and surface tension of the polymer and a tiny cone, often referred to as a Taylor Cone is formed.

Further increasing the electric field's strength will deform the Taylor Cone until a fine fiber is extruded from the cone's apex. When working with solutions, this strand will continue as a stable jet for a short period of time before the instability or whipping region occurs as seen in Figure 1. This region further decreases the fibers diameter as the solvent evaporates from the solution leaving an extremely small fiber. It is important to note that due to a much higher viscosity and lack of solvent evaporation, fibers electrospun from the melt do not undergo an instability region and as a result have much larger fiber diameters. 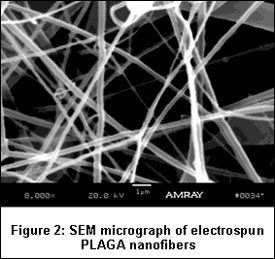 Electrospun fibers produced have typically been collected as a random nonwoven mat seen in Figure 2 and most the applications being developed today reflect this configuration. However, advancements in collection techniques continue to be a major focus of research and as a result, it is possible to collect aligned continuous fibers that be twisted to form yarns composed of nanofibers.

It is one thing to successfully produce nanofibers but it is more important from an economic standpoint to find a suitable application for them. One of the main goals for producing nanofibers was the theoretical strength they should possess. In conventional fibers being produced today, there are fairly defined limitations to the percent of crystallinity that can be obtained in a fiber/yarn form. Along these same lines, another potential benefit of nanofibers technology is the tremendous increase in surface area to weight or volume ratios. The lure of nanotechnology stems from the possibility of re-defining these limitations.

For example, the actual thickness of a carbon/carbon bond is approximately 1 nanometer. If a fiber can be produced that is only 5 nanometers in diameter, it is effectively forcing the molecular chains to align in a highly crystalline manner. Ideally, the resultant strength of the fiber produced will be determined by the strength of the carbon/carbon bond in the molecular chains of the polymer.

Both of these advantages of electrospun fibers are very appealing to a broad array of potential applications in many industry segments. The composites industry for one is especially interested in nanofibers technology because it now becomes possible to create products that are much smaller and lighter in weight, yet capable of performing at the same or enhanced mechanical standards. If the fibers can be collected individually and aligned to specific orientations, it is possible to increase the maximum volume fraction of fibers in a matrix thus increasing the strength of the material. The increased surface area/weight will also allow for better bonding with the matrix to help prevent failure by pullout of the fibers.

In addition to the composites industry, the filtration industry has already begun utilizing nanofibers and in some cases has generated commercially available products. Nano-fibrous mats, similar to that shown in Figure 2 can be made with varying fiber diameters based on several input parameters. With varying fiber diameters, the pore size of the mat can be controlled to a fairly high degree. As a result, nano-fibrous mats can be designed to block out molecules of specific sizes. In addition to mechanical filtration as described above, nano-fibrous mats can be treated so that when molecules of specific design pass through, a chemical reaction takes place which neutralizes any potential hazards.

Similarly, nano-fibrous mats are being explored as biomedical grafts and wound dressings. It has been found that cells can adhere and proliferate into the mats with a great deal of success. Also, because of the extremely small size of the nano-fibers, the potential exists for layering of different polymers with specific functionalities. Electrospinning techniques can be applied to nearly every polymer of sufficient molecular weight, including those which are FDA approved; therefore no issues on biocompatibility exist.

The application of nanofibers is not only aimed at the specialized industries involved in technical textiles. The introduction of microfiber into the traditional textile markets created a wave of new garments claiming stain resistance and incredibly soft hand. The introduction of nano-fibers and nano-coatings can take that one or more steps further. Instead of claiming to feel like worsted wool, claims can now be made of synthetic cashmere; the feel of cashmere at a fraction of the cost!

One of the greatest attributes of electrospinning and nanofibrous technology is that it is very much still in its infancy. Numerous ideas and concepts have been proposed or written about, but in many cases the theoretical expectations have yet to be realized. It has been shown that nearly every polymer imaginable can be electrospun either from solution or melt so there are no limitations in that regard. Today, the fibers are collected in the form of a mat of staple aligned fibers. Future developments and processing technologies must find a way to orient a continuous fiber for the technology to continue to advance in the right direction. It has been shown to some degree that electrostatic attraction and repulsion can be used to control the path of the jet to some degree. With enhanced methods of doing so, it may be capable of directly producing woven or braided fabrics from the electrospinning station. While the process itself is basically waiting for the mechanical/processing mechanisms to catch up that are capable of maneuvering single fibers into specific configurations, much work still needs to be done to optimize the conditions for making a specific fiber diameter with a specific polymer. It is only after we can truly control the process, that we can use it to the best of its ability and capabilities.

The authors would like to thank Drexel University for use of the Scanning Electron Microscope and Dr. Frank Ko for his assistance, both educationally and financially.