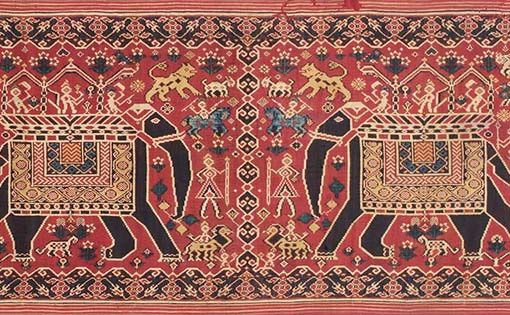 Clothes are one of the most creative ways of expressing individuality, lifestyle and culture. Every community, region and culture has its own distinct way of dressing and clothing. India has a rich heritage of art and crafts which is reflected in its textiles and fabrics. The art of weaving and dying of fabrics was practiced in India from very ancient times. It was apparently such an important part of life of the ancient times that many of its techniques gave the name to philosophical and religious thought. For example, the word Sutras, the ancient Buddhist scriptures, is said to have been derived from the word Sut, meaning thread or to string together. Granth, the name for a holy book as in the Guru Granth Sahib of the Sikhs, comes from a textile term for knitting or weaving together.

From very ancient times, India was an export centre for clothes and fabrics. Historical studies point out that the Harappan town of Lothal, dating back to almost 2000 bc, is only 100 kms from Ahmedabad, where a number of dying units similar to those used even today were exporting dyed cotton fabrics.

The magic of cotton 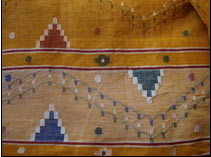 Cotton in particular was core to Indian textiles and has been cultivated here since ancient times. Ancient travelers described cotton cultivation as sheep growing on trees, for they only knew white wool, which was taken from sheep. The centres known for very finely woven cotton were in Bengal, Varanasi, Chanderi and in the towns of Uppada, Mangalagiri and Venkatagiri of Andhra Pradesh.

The patterned finely woven cotton was known as Jamdani, a distinct style of weaving, which is an Indian specialty.

Well, Indian textiles and cotton in particular is such a vast subject that we can go on talking about it. In this issue lets look at one aspect Folk Embroidery.

Folk embroidery in India was the best means by which women, especially in rural India, expressed their lives, dreams and desires. Embroidery, which is essentially meant to strengthen the fabric and to decorate it, was an important part of the household tradition of different communities who migrated to India and who added to the artistic heritage of the country.

Gujarat, which had an open land route connecting it to Central Asia, had a large number of settlers from Central Asia. They settled in Kutch and Saurashtra and retained heir traditions of embroidery, with the result that a very rich range of embroidery can be found in these areas.

The women embroider clothes for their personal use, for their children and even special items for the use of their men. The animal decorations with embroidery are also part of the tradition. 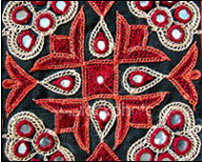 During Diwali, light is eflected by the many mirrors that are embroidered.

Chain stitch motifs in embroidery are prepared with the use of an awl and is known as Mochi Bharat.

The awl or ari as it is locally known is used for stitching leather and has been found at Harappan sites and is possibly older than the needle.

The thread is fed from below and is pulled up with an awl and comes up like a loop. The second loop is pilled forward. This creates the effect of a chain stitch, which gives strong linear patterns. Mochi Bharat of Kutch was used for making clothes for the court.

Rajasthan also had a tradition of ari bharat where exquisitely patterned knuckle pads were embroidered for the Rajput warriors often; miniatures were recreated on some of them through embroidery. It is said that Marco Polo, the great traveler, talked of the finest leather mats seen by him in India.

The Phulkaris of Haryana and East Punjab are also known for their distinctly embroidered patterns. One such variety has rows of designs or motifs of fruits, flowers or birds. The other variety has motifs drawn from everyday life.

Bihar too has a rich tradition in embroidery. People here embroider the Kashida, in which the entire surface is covered with embroidery. The Kantha work from Bengal is also known for its beauty and uniqueness.

In Orissa, canopies and tents are embroidered for use at the Puri Rath festival at a village called Pipli. Down South in Karnataka, the Kasuti embroidery is a stylized form with stitches based on the texture of the fabric. The three different stitches are the Negi, the Gavanti and the Menthi.

In Chikanayakapeta of Tamil Nadu, cloth embroidery is specially prepared for decorating the carved ratha or chariot in which the gods and goddesses are taken for procession.

Well, the list can go on. But at least now you can appreciate the art and the rich cultural past that have gone into any traditional fabric, next time you see or use one.

By:
www.hooplaclub.com
Published: Sep 2008
Reuse this Content
Our Clientele