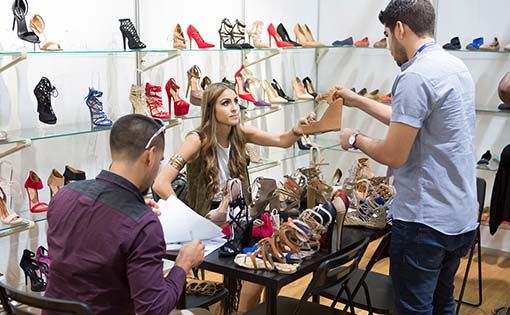 Sparse foot traffic this week in the Las Vegas Convention Center suggests fewer people than usual made tracks to town for one of the shoe industry's biggest conventions.

Thanks to an economic kick in the shins from increased manufacturing costs and decreased consumer spending, folks flogging footwear this week at the World Shoe Association Show say it's unlikely the 35,000 or so people who typically attend the semiannual event made the trip this time.

People who did make it say they weren't surprised attendance is down because manufacturers and retail buyers - especially small, specialty companies - are finding it hard to make ends meet.

"Customers owe money to their suppliers. They don't want to run into them," said Neal Marks of Hazan Shoes Inc., maker of affordable, stylized dress shoes sold in stores such as Mastroianni Fashion in the Las Vegas Valley.

Marks said he has attended the show regularly for about 20 years and expected fewer people would make the trip to Las Vegas for the event, which ran Monday through Wednesday at the convention center and The Venetian.

"The little guy is not here," said Marks, who estimated it cost his company about $20,000 for space, hardware and other expenses related to exhibiting at the show.

Others suspect larger firms are cutting costs by sending fewer people to conventions. If that's the case, shoe manufacturers might still write enough orders to make the show a success, but there will be fewer people spending on hotel rooms, restaurant meals and other building blocks of the Las Vegas economy.

"It only takes a couple of orders to pan through and a slow show becomes a great show," said Ken Struss, West Coast sales representative for Goorin Bros. Inc., a San Francisco-based retailer.

Struss was pushing products from Goorin's 1333 Minna brand, a line of hats styled by artists and aimed at younger buyers. In Las Vegas, the line is available at Stash Clothing stores, he said. "For the big guys it is status quo," Struss said. "For the other, smaller, exhibitors it seems to be pretty slow."

It isn't just the shoes, either.

"Flat is good in this type of economy," said Chris Meyer, vice president of convention sales for the Las Vegas Convention and Visitors Authority.

The authority, which runs the convention center and boosts conventions at resorts throughout Las Vegas, is trying to juice attendance with increased marketing.

In March it launched a telemarketing service it says has made about 65,000 calls to potential convention attendees. About 2,000 of those responding told operators they would attend an event. At the typical spending level of $1,500 per person while in Las Vegas that translates to more than $3.1 million.

But attendance remains stagnant for some events, especially in hard-hit sectors of the economy.

"Anything that is in that retail space, they are having troubles," Meyer said.

The short shelf life of fashion trends has always lent an air of even greater volatility to footwear and other fashion-oriented industries.

On the demand side, consumers who feel insecure about their jobs and the value of their homes are reining in spending on all but the most basic staples, such as gasoline, food and sensible clothing.

It's happening as the supply side faces dramatic increases in the cost of bringing products to market. Petroleum, which is needed to transport and manufacture shoes, costs about twice as such now as it did last year at this time.

And in China, where many of the shoes sold in America are produced, factories face rising costs because workers are organizing for improved workplace safety and higher wages and the government is enforcing stricter environmental regulations.

According to a report by specialty news service Internet Product Development Group, more than 2,300 shoe factories in one Chinese province closed during the first half of the year.

And it could worsen. A risk analyst from the firm Sovereign Advisers told the news service the problems in China haven't yet seeped through the supply chain in the form of higher costs.

"We expect a lag of two to three quarters before the real impact occurs," analyst Kevin O'Brien said.

The global squeezes on supply and demand are already taking their toll in Las Vegas.

"I think we are in a period of time now where it is that much more dramatic," said Diane Stone, chief operating officer of the WSA Show and the Collections at WSA. "There isn't just one thing going on now."

But Stone says the 60-year-old WSA show is better positioned than most Las Vegas conventions to weather the current economic storm. It moved to Las Vegas from Long Beach, Calif., 20 years ago and has been held at the Las Vegas Hilton and, now, the convention center and The Venetian in summer and Mandalay Bay and Sands Expo Center in winter.

With about 1,300 exhibiting companies, the event is widely known as the sole event for many retailers who want a one-stop shop to take in everything available on the market, an asset in tough times.

When people pare back, they tend to cut superfluous expenses first. Stone says that for many in the footwear industry, WSA is must-do event.

"In economic times like these, the shows that do best are the ones that are recognized industry leaders," she said.

The show changed hands late last year and management is cutting back on fancy parties and big concerts by the likes of Rod Stewart and Stevie Wonder in order to put the focus on feet.

That helps people who attend get more business done for less money.

"They are outrageously expensive to stage," Stone said of the concerts. "This is a business event. You want to invest in the right places."