Heels over the years

The high-heeled shoe - the ultimate piece of fashionable footwear - has come a long way. This shoe, which has often been a matter of discussion and debate, has not always been what we know it as today. With the passage of time, it has considerably evolved. And that is what this article seeks to study - the journey of the high-heeled shoe till date.

The formal version of the high-heeled shoe is believed to have come into existence during after the year 1533. However, rougher, more informal versions have been known to exist since long back.

Egyptian murals dating as far back as 3500 BC show men and women wearing shoes, some of them in heels. It is believed that these heels were mostly worn for special occasions. Butchers in Egypt were also known to wear heels, so as to avoid stepping on the carcasses of animals.

Evidence has also been found to indicate that people in Ancient Greece and Rome wore heeled shoes called 'Kothorni' or 'Buskins'. These shoes would have heels made of wood, and would be worn mainly by actors. Another evidence of the wearing of high heels in the olden times comes from Ancient Rome, during the times when prostitution was considered illegal. During this period, sex workers would wear high heeled shoes for the purpose of identification.

In the Middle Ages in Europe, a product called 'Pattens' was largely used by males and females. It referred to wooden soles that could be readily attached to shoes, so as to avoid stepping on dirt when walking outdoors. 'Pattens' were believed to be the forerunner for the invention of the 'Chopines'. 'Chopines' referred to a more primitive version of the platform heels of today, invented in Turkey in the 1400s. It was largely used all over Europe until the middle of 1600. Chopines would be up to 30 inches in height, and women would be required to use a cane or the help of a servant to enable them to walk comfortably without tripping over. Like pattens, chopines would also be strapped to shoes, and were worn mostly by ladies.

This practice of making heels as a separate component that could be easily attached to shoes continued till the 1500s. With the passage of time, this led to the production of heeled shoes as a single piece. The popularity of the heeled shoe went up considerably in the 1500s. Mostly, they were used by riders, as they prevented the feet from slipping out of the stirrups while riding. The heeled shoe that was originally designed for riders was about 1 to 1-1/2 inches high, and was similar in appearance to the cowboy boots or riding boots of today.

In the mid 1500s, the heel became thinner and more stylish. This change came about on account of the fashionable high-heeled shoes popularized by Catherine de Medici, who married Henry, the son of King Francis I of France, in the year 1533. Catherine, who wore high heels on account of her short stature, made them more popular as 'fashion accessories' rather than as 'functional accessories'. By the year 1580, fashionable high-heeled shoes were worn largely by the affluent class of the society, which led to the coining of the term 'well-heeled', meaning a person who was well-to-do. 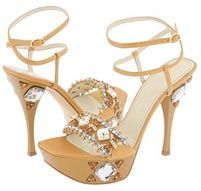 In the beginning of the 1700s, King Louis XIV of France used to wear heels as high as 5 inches, which would have elaborate scenes of battle on them. These heels later became popular as 'Louis heels'. During the century, heels evolved to become more thin, arched and more fashionable. As they were believed to make feet look more attractive and desirable, laws were passed over time, banning women from wearing high heels to 'capture' a man. Women who violated this law would be declared witches and would have to face trial.

In the year 1791, high heeled shoes were completely banished by Napoleon. In spite of this, high heels made a comeback in the year 1790s, courtesy Marie Antoinette with her 2-inch heels. The heels worn during this period were relatively low, just about a wedge in size.

After a fall, the high-heel fad picked up again in the 1860s. Heels began to be available in different lengths. Some people highly advocating wearing high heels, stating that they were not harmful to health, but, in fact, were beneficial. According to them, wearing high heeled shoes prevented people from stooping excessively, thereby reducing the probability of backaches, and also helped in walking properly and in a less tiring manner. Some critics, however, believed that wearing high heels gives rise to a promiscuous gait, while some believed that the high heel was symbolic of the curved claw of a witch or a devil.

High heels gained full-fledged acceptance in the latter part of the 19th century. This was replaced by the demand for comfortable flat shoes in the earlier 20th century. In the mid 20th century, fashions changed, and as hemlines grew higher, the demand for stylish high heeled shoes went up. Again, in the 1930s, heels became shorter in length, a trend that was soon replaced by the demand for elegant high heels in a variety of patterns, ranging from glittery to colourful ones. This trend was popularized by the new varieties of heels sported by Hollywood celebrities. In the 1940s, due to the Second World War, the availability of luxury items went down, and heels became thick, simple and unadorned.

The world of heels underwent a revolution with the invention of the stiletto in the 1950s by Christian Dior. The stiletto had a low vamp and a narrow heel. However, they were not very well accepted, and some public buildings banned the use of stilettos as they were believed to damage the floors.

With the rising popularity of the miniskirt in the beginning of the 1960s, shoes with stiletto heels also became popular. Again, with the upsurge of the feminist movement, stilettos began to be opposed by feminists because they were believed to restrict the movement of women and slow them down when escaping from male violence. As a result, low-heeled shoes with square toes were developed. Later, in the 1960s, the platform shoe was developed, which became hugely popular in the 1970s. 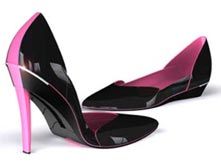 High heels came back in fashion in the 1980s, a trend that continued into the early 1990s as well. In the late 19th century, factories producing high heeled shoes began to open in Italy and other parts of the world. This was followed by America, which opened its first heel factory in the year 1888. Manolo Blahnik's high heels began making a large-scale appearance in the fashion circuits, reviving the fad. With the passage of time, high heels began to be considered as signs of designer and fashion wear for special occasions, while flat shoes became the norm for the corporate world. Designers like Jimmy Choo and Emma Hope designed extra-tall heels in the 1990s. Again, in the later part of the 1990s, the fashion of the high heels started declining.

With the onset of the 21st century, heels again got a lift, with the introduction of the 'heel-less' high heeled shoe by Manolo Blahnik, as well as several varieties of heels being developed by many other designers. Women began to have a wide choice of heels to wear for different occasions.

The fashion of high heels still continues to be evergreen. High heels are very commonly found at parties, special occasions as well as on the ramp. Heels, even after such a long period of time, remain symbolic of fashion, style, and class. It is now a must-have in the wardrobe for fashionistas.

That is the long story of the journey of the high heeled shoe. So, the next time you shop for a pair of shoes, don't forget to add a pair of heels to your shopping list!