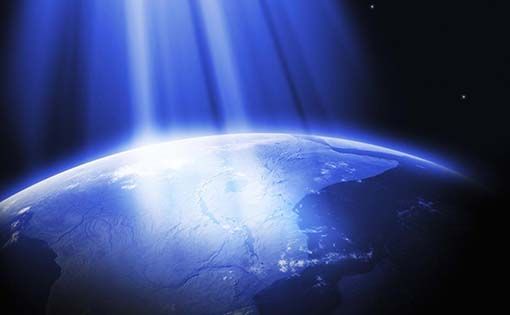 Ozone (O3) is a triatomic molecule, consisting of three oxygen atoms. It is an allotrope of oxygen that is much less stable than the diatomic O2. Ground-level ozone is an air pollutant with harmful effects on the respiratory systems of animals. Ozone in the upper atmosphere filters potentially damaging ultraviolet light from reaching the Earth's surface. It is present in low concentrations throughout the Earth's atmosphere. It has many industrial and consumer applications. Ozone, the first allotrope of a chemical element to be recognized by science, was proposed as a distinct chemical compound by Christian Friedrich Schnbein in 1840, who named it after the Greek word for smell (ozein), from the peculiar odor in lightning storms. The formula for ozone, O3, was not determined until 1865 by J.L.Soret and confirmed by Schnbein in 1867.The odor from a lightning strike is from ions produced during the rapid chemical changes, not from the ozone itself.

The highest levels of ozone in the atmosphere are in the stratosphere, in a region also known as the ozone layer between about 10 km and 50 km above the surface (or between 6.21 and 31.1 miles). Here it filters out photons with shorter wavelengths (less than 320 nm) of ultraviolet light, also called UV rays, (270 to 400 nm) from the Sun that would be harmful to most forms of life in large doses. These same wavelengths are also among those responsible for the production of vitamin D, which is essential for human health. Ozone in the stratosphere is mostly produced from ultraviolet rays reacting with oxygen:

It is destroyed by the reaction with atomic oxygen:

The latter reaction is catalyzed by the presence of certain free radicals, of which the most important are hydroxyl (OH), nitric oxide (NO) and atomic chlorine (Cl) and bromine (Br). In recent decades the amount of ozone in the stratosphere has been declining mostly due to emissions of CFCs and similar chlorinated and brominated organic molecules, which have increased the concentration of ozone-depleting catalysts above the natural background. Ozone only makes up 0.00006% of the atmosphere.

Low level ozone (or troposphere ozone) is regarded as a pollutant by the World Health Organization. It is not emitted directly by car engines or by industrial operations. It is formed by the reaction of sunlight on air containing hydrocarbons and nitrogen oxides that react to form ozone directly at the source of the pollution or many kilometers down wind.

Ozone reacts directly with some hydrocarbons such as aldehydes and thus begins their removal from the air, but the products are themselves key components of smog. Ozone photolysis by UV light leads to production of the hydroxyl radical OH and this plays a part in the removal of hydrocarbons from the air, but is also the first step in the creation of components of smog such as peroxyacyl nitrates which can be powerful eye irritants. The atmospheric lifetime of troposphere ozone is about 22 days and its main removal mechanisms are being deposited to the ground, the above mentioned reaction giving OH, and by reactions with OH and the peroxyradical HO2・ (Stevenson et al, 2006). 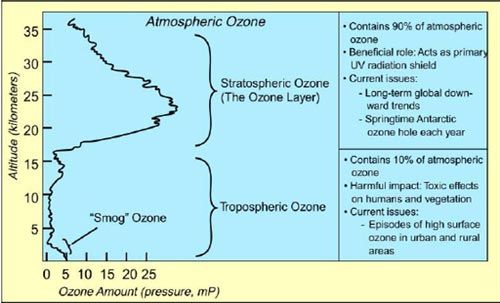 As well as having an impact on human health there is also evidence of significant reduction in agricultural yields due to increased ground-level ozone and pollution which interferes with photosynthesis and stunts overall growth of some plant species. 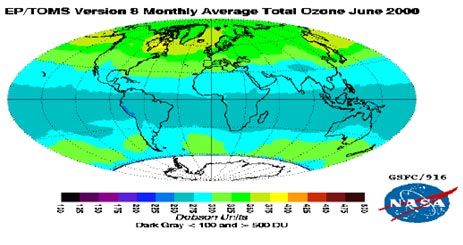 The reaction occurring between double bonds and ozone is known as ozonolysis when one molecule of the gas reacts with the double bond:

The immediate result is formation of an ozonide, which then decomposes rapidly so that the double bond is cleaved. This is the critical step in chain breakage when polymers are attacked. The strength of polymers depends on the chain molecular weight or degree of polymerization, the higher the chain length, the greater the mechanical strength (such as tensile strength). By cleaving the chain, the molecular weight drops rapidly and there comes a point when it has little strength whatsoever, and a crack forms. Further attack occurs in the freshly exposed crack surfaces and the crack grows steadily until it completes a circuit and the product separates or fails. In the case of a seal or a tube, failure occurs when the wall of the device is penetrated.

Ozone gas attacks any polymer possessing olefinic or double bonds within its chain structure, such materials including natural rubber, nitrile rubber, and Styrene-butadiene rubber. Products made using these polymers are especially susceptible to the problem, which causes deep and dangerous cracks to grow slowly with time, the rate of crack growth depending on the load carried by the product and the concentration of ozone in the atmosphere. Such products can be protected by adding anti-ozonants, such as waxes which bloom to the surface and create a protective film.

Ozone (O3) is produced synthetically by passing an atom of oxygen (O) between electrodes with "silent discharge". The most dangerous property of ozone, as far as the rubber producer is concerned, is its enormous reactivity. The effect of it is that every ozone molecule meeting a chain of polymer molecules breaks this chain.

A drafting apron for example, consists of polymers and is thus liable to attack by ozone. 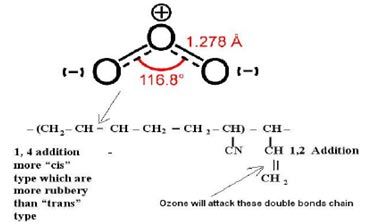 However these types of composition are not resistant to oil, nor do they have the required surface properties for fiber processing. Under industrial conditions the question now arises of why the action of ozone occurs with consequent cracking in drafting aprons, varying to a very great extent in time and place.

The ozone layer in the earth's atmosphere mentioned above is in constant motion. The known circulation of the masses of air surrounding the earth, the rising of air in the vicinity of the equator and the falling of air in the cooler zones has the effect that the ozone content near the equator is lower than in our temperate latitudes.

Furthermore, ozone is formed by ultraviolet rays of certain wavelengths and destroyed by sunlight and other wavelengths. These factors explain the local and time differences in ozone concentration in the air around us.

Impact of Ozone in spinning operation

In the spinning shed, the unwelcome and unavoidable effects of ozone are noticeably experienced.

We know, through experience and tests, that highly stretched rubber has lower resistance to ozone attack than fully relaxed rubber. This means that the acute angel at the nose bar increases this liability to ozone attack.

Furthermore, the forced air circulation plays a significant role. Whereas a few years ago air conditioning units with 8 -fold air exchange were adequate, today 20 -30 changes of air per hour have become the rule.

Blower unit's direct ozone liberally onto the drafting unit and also the air circulated by end-break extractor units increase the throughput of air and consequently the ozone attack on the drafting unit. For test purposes in our laboratory we have exposed drafting aprons to a known density of ozone and found that ozone cracking varies in direct proportion to the air speed.

It was also found that dust particles in the air could combine with ozone. The cleaner the air, the more free ozone there is available to damage the rubber.

Layers of foreign matter on the surface of apron can form a protective coating against ozone attack. In earlier days drafting aprons were often oily. Today this is seldom the case. However, the oily film on the apron formed a protective layer against the action of ozone.

Today there are chemical surface protecting agents against ozone but these are unsuitable for use on drafting aprons, as they have an unfavorable effect on fiber affinity. In addition the effectiveness of these protective films does not last long enough. 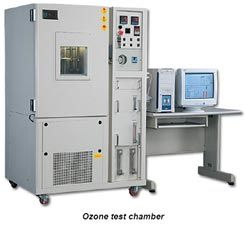 Our Inarco research department has been working for some time on the progressive development of new anti-ozone agents, which may also be incorporated in antistatic rubber compositions. These tests and development work have proved positive so that we are now in the fortunate position of being able to offer you drafting aprons which afford the maximum resistance to ozone in the present state of technical development. Further development will be carried out energetically and with knowledge based on world -wide experience, and we are anticipating making further progress in mastering the problem associated with ozone.

Another form of cracking in aprons is flex cracking. During operation drafting aprons must run over nose bars etc. at a sharp angle. A Typical ring spinning long bottom apron will make at least 1.5 to 2.0 Million turns whereas top apron will make 3.5 to 4.0 million turns within its life .The continuous stress at the bend, under tension, leads to some drying out of the material. Drafting aprons contain permanent softening agents which reduce drying out and consequent flex cracking. 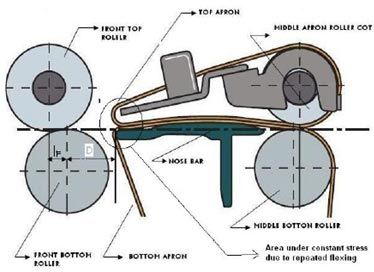 In this connection we may also mention that faulty packing and storage of the aprons can lead to premature cracking. For easier counting and storage, drafting aprons are often made into bundles. In this state the aprons are under tension and suffer permanent deformation so that recovery, as would occur under practical use, is impossible. Care must therefore be taken to store as loosely as possible and not in bundles. Aprons of small inside diameter up to 60mm I.D. should, under no circumstances, be bundled, by aprons of large inside diameter (from 61mm ID) which can be bundled, however, with a maximum of 5 aprons per bundle.

The author is the Manager- Application Technology in Inarco Ltd.