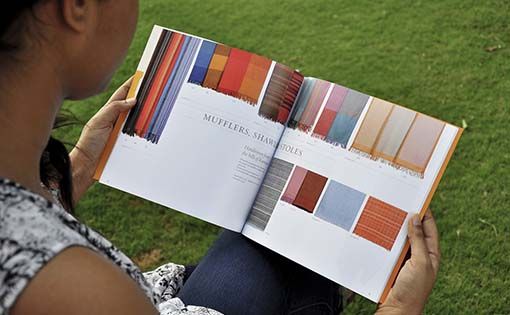 Handlooms and Handicrafts represent an important source of livelihood in India, especially in the rural areas. India Artisans and Craft workers Welfare Association (AIACA) works toward enhancing the competitiveness and incomes of crafts producers through policy research and advocacy.

The Craftmark initiative is an effort by the All India Artisans and Craft workers Welfare Association (AIACA) to help in denoting genuine Indian handicrafts, developing sector-wide minimum standards and norms for labeling a product as a handicrafts product, and increase consumer awareness of distinct handicraft traditions. Under this initiative, AIACA will license the Craftmark logo for use by Craft-based businesses, cooperatives and NGOs for use on product tickets and labels.

She says "The Craftmark logo is intended for organizations that are producers or retailers of Indian handicraft products. The logo will be licensed to applicants only after a verification of their craft products and the craft genres they belong to".

In the view of Anubha Sood, Need and benefits of craftmark to companies/organization "The domestic market for handlooms and handicrafts is poised at a critical phase of its development. Economic liberalization has helped to open up immense opportunities for domestic market growth in handcrafted products. However, liberalization has also opened up immense challenges, both from foreign competition due to the lowering of trade barriers and domestic competition from industrial products. Adopting a Craftmark will raise consumer awareness and create a distinct market identity for Indian handicrafts."

When Fibre2Fashion enquired about the Standards for certification of Craftmark she told "AIACA will institute certification standards for various categories of Indian handicrafts with the help of experts in various craft-types and consultations with craft producers from across the country. The certification standards will be reviewed and approved by an independent committee consisting of representatives from the crafts sector. Every effort will be made to develop the standards through an independent and non-partisan process and the standards so developed will be freely available to the public."

Anokhi, Dastkar, Fabindia, Soma and Urmul are the few organizations stated by Anubha Sood that have adopted the Craftmark for their products.

Fibre2fashion reach out to end users to know their views on effectiveness and usefulness of Craftmark.

Mr. Pritam, Managing Director of 'Anokhi', a Handicraft Company while sharing his thoughts with Fibre2Fashion states that, "We are committed to the initiative and the endeavor of the 'Craftmark Logo' and feel it is extremely important. However, benefits from the Craftmark logo need more public awareness of the logo and its objectives. Currently we feel people buy our products due to our own label rather than being inspired by the 'Craftmark' logo. Until the logo is better known to the public we will not really get any substantial benefits."

Dastkar Andhra began in 1988 as an offshoot of Dastkar, Delhi. It is a non-profit trust, registered in 1995 that works within Andhra Pradesh to promote the interests of the producer communities within the cotton handloom weaving industry. The objective of Dastkar Andhra has been "to explore practically, the possibilities of craft production as a contemporary economic activity based on traditional skills and resources, and to develop forms of organization that would ensure wide dispersal of economic returns among the producers."

Dastkar - A society for crafts and craft people strongly believe in "craft" as a social, cultural and economic force that despite being marginalized due to urbanisation and industrialization has enormous strength and potential and has a vital role to play within the economic mainstream of the country. Dastkar has taken initiation to promote "craftmark logo among its members. Fibre2Fashion had a special interview with the Chairperson, Laila Tyabji of Dastkar. She strongly believes that "Craftmark logo will increase the reliability of the product. It will give assurance to the end users that they are purchasing handmade products only." She also added that, "Generally handcrafted products are high priced and people are suspicious about authenticity of product but Craftmark gives justification of both price as well as authenticity."

By:
Fibre2Fashion
Published: Oct 2008
Reuse this Content
Our Clientele