China was having a sustained economic growth, which very few countries were able to match. With a steady increase in its GDP of more than 8% a year, China came into the global spotlight as one of the major player in the international economy. However, in the long run, this extraordinary GDP growth, that was driving China's economy higher and higher is hindered by several obstacles. Instead of bouncing back after the Olympics, China's economic boom began to slow down as the demand for exports declined.

China's economic growth tends to focus on its economic transition. The present downtrend in the economic growth of China is due to a drop in the export growth. With a weakening international demand, plunge in the growth becomes all the more evident. Besides, increase in investment costs, tightening of monetary policy, raising prices of energy and raw material, hike in wages and a host of other decisive factors have also created a negative impact in the economic growth of China. Experts believe that a further slowdown due to the declining external demand and rise in domestic production costs would surely inhibit the country's investment growth. This would make it increasingly difficult for the country to maintain a growth rate of 11.9% which was achieved in 2007.

From 2000 onwards, economic growth in China was in an ascending pace for eight long years, maintaining a 10% growth for five consecutive years during the period 2003-07, and recording a high 11.9% in 2007. However, during 2008, the growth rate strode down the ladder as GDP stood at 10.6% in the first quarter, marking a drop of 1.1%. Growth rate in the first half was registered as 10.4%, which was down by 1.8% as compared with the corresponding period during the last year. The Consumer Price Index (CPI) in the first half of 2008 rose to 7.9%, which is 3.2% higher as compared with the figures of the first half of 2007. The Producer Price Index (PPI) for January-May of 2008 rose to 7.6%, which is comparatively higher than the 7.4% of the corresponding period during 2007. In June 2008, the PPI rose to 8.8%, setting a three-year high growth rate for six consecutive months.

On the contrary, while import growth rate witnessed a continuous rise, net export surplus exposed a declining trend steadily. Export growth in the first half was 21.9%, which was down by 5.7%. Figures of the single month of June exposed a fall in the exports to 17.6%, a decline of almost 10% every year. In contrast to this, imports for the month grew to 30.6%, an increase of 12.4% over the same period the previous year while the overall trade surpluses reduced to US $13.2 billion during the corresponding period. Despite an increase in the net exports during the first six months of 2008, it was still lower when compared with the same period during 2007. By the end of June 2008, the balance of accumulated foreign exchange reserves reached $1.8088 trillion, but new inflow of foreign exchange reserves were below the level achieved a year before.

China's Exports and Imports with US and EU: 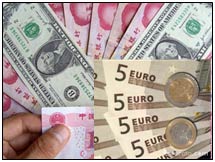 From the perspective of trade modes, export growth rate of general trade in China fell sharply during the first half of 2008, while import growth rate of general trade rose rapidly and trade surplus of net exports of general trade declined dramatically. Even growth of processing trade fell significantly. Growth rate of average annual exports to United States, Europe and Asia declined significantly in 2008. Exports to the United States showed a downward trend in the first half of 2008. Overall share of exports to the US reduced to only 17.53% as compared to a 21.24% in the same period during 2006. However, imports from US into China maintained a share of 7-8% of all imports. Strikingly, the share of China's exports to Europe continues to increase. In the first half of 2008, EU accounted for 24% of the total exports from China, while imports remained at the same at 14%.

Constitutive changes in the imports and exports of China with other major countries are closely related with the fluctuations in RMB and other major currencies. Since July 2005, Chinese Yuan continued to appreciate against the US dollar, but has fluctuated against Euro and the Yen, comparatively. This caused a change in the exchange rates. Appreciation in Chinese currency would reduce its export competitiveness, ultimately affecting its exports and economic growth.

Views of the future of China vary widely. Projections cannot predict the future with certainty. Analysts assert three key requirements as standard growth patterns; structural change, factor price equalization, and catching up. China's past economic growth fits well into all the three requirements, and will apply to China in the future as well. Extrapolating into the future based on the past data, if China continues to grow with the same average growth it showed during the period of 2003-07, it will surpass US by 2015. Industry experts predict that China's future economic growth mainly depends on resolving the current problems and assure that events of catastrophic dimensions do not occur.

Initiatives of the Chinese Government:

The Government is taking initiatives to minimize the operational pressures for export oriented industries so as to bring China's deteriorating economy into a positive phase. A series of interest rate drop offs, and reduction on reserve requirements are undertaken to coax the banks to lend more to the corporate sectors. Actions are taken to curb the malaise spreading through the country's economy to boost the expenses on basic infrastructures such as roads, public housing etc. The Government has also increased the tax rebates for textile and garment exports from November, 2008 onwards. The current rebate of 13% will be raised to 14%. Analysts predict that export tax rebate adjustments will increase the shipment of textile and garments to approximately 570 million Yuan.

With the current economic outlook of major export markets like US and EU weakening, measures like bringing down the rate of RMB appreciation and increasing the rate of export tax rebate for certain products would be of limited help in resurrecting China's economic growth. China's efforts towards economic growth require a vigorous Government policy by implementing steady economic reforms. The prosperity of China depends on its ability to achieve balanced economic growth, and sustainable progress.