India ITME - 2008: Views and Reviews past the Show 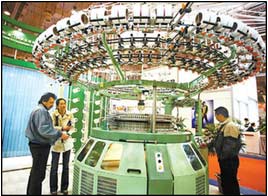 India ITME, 2008 - biggest textile machinery show held in India concluded on 22nd November at India's Silicon Valley, Bangalore. The show has seen a great success in terms of participants as almost every leading machinery manufacturer attended the show. Many innovations have been introduced in the show for the visitors who had come from across the globe to visit the show.

The show which took place at Bangalore International Exhibition Centre initially had three A.C. exhibition halls planned which were spread across 40,000 square meters of exhibition space. But considering huge response and interest of companies in the show organizers were forced to add one more exhibition hall was added at last time.

This time there is a change in exhibition venue of the show by organizers. Previously ITME was organized in Mumbai while this time the Bangalore was organizers' choice as fair's venue considering good facilities this venue can provide. According to some in industry this became one of the reasons for less number of visitors for the show as most of people find this venue bit inconvenient to travel to when compared to Mumbai. 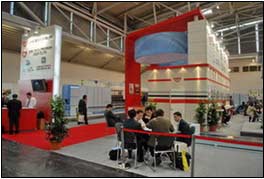 Terrot is a leading, Germany based, supplier of circular knitting machine providing solutions for all high end requirements in this field to the world market.

Terrot participated in India ITME with its two special machines S296-1 Open width Single Jersey knitting machine which has USP of new compact Open Width Frame and mattress machine UCC572M which is electronically controlled Double-Jersey Jacquard machine. Both of them are already proven models in other countries and Terrot considering India as an important market for their products promoted these two machines in a big way through ITME.

Terrot considered India ITME-2008 as an important show for entry in Indian market. When asked about their experience with India ITME -2008, Mr. Andreas Von Bismarck, Managing Director -Terrot GmbH, feeling that it will be bit early to comment on the fair at this point of time and commented to media that Terrot had good number of meeting and discussions and also they observe good numbers of visitors in the last days of the show.

Himson Textiles is a prominent Indian player in the field of textiles. The company deals in variety of machines like draw texturising machines, twisting machine, rapier looms and knitting machines. Himson participated in India ITME - 2008 with some other 450 Indian and 285 foreign exhibitors to meet prospective visitors for their products.

Fibre2fashion got chance to know views of Mr. Pratik Bachkaniwala, for India ITME-2008.

When asked about his experience of India ITME -2008's visitors, facilities and other criteria, Mr. Bachkaniwala (Himson textiles) replied "Our experience at India ITME-2008 was excellent looking into the fact of geographical inconvenience and the effect of worldwide demand contraction. The visitors were lesser in numbers compared to previous exhibitions, but genuine investors, which are looking for expansions or new projects, were present there. A lot of potential and existing customers had made it a point to visit and explore new developments in the textile engineering industry.

The facility was state of the art, and no doubt about it. Beautiful landscape, well organized halls and excellent peripheral infrastructure within the premises. The venue is created for international exhibitions and for the first time, any textile machinery fair organized in India looked like an international one in its true sense. Only black spot in the entire show was a little management issue there. All halls did not have the same setup (hall 4) and within the halls, all floors did not have same amount of visitors. Also, there were issues of duplicate stand numbers. But overall the show was well organized and with a new trend, new lessons are to be learnt. I sincerely believe that ITME society will surely put a more improved show next time."

When probed on question, whether India ITME matched their expectations as an opportunity to meet prospective buyers, he responded in following way "The exhibition provided a very good platform for interacting with our existing customers and new potential customers as well. We had a very good chance of showing our new developments and also got feedback on future requirements from the user industry. We were able to bag some small orders, based on which we are expecting larger orders from same group of customers."

According to Mr. Sankhe amenities in the show were good and well maintained. Although numbers of visitors were not at par with previous ITME exhibitions due to various reasons and geographical location is one of them.

Although Mr. Sankhe restrained himself in divulging any information on prospective business leads earned from this show and said they are still working on their earnings at ITME-08 and remaining optimistic about end results of the show he said hopefully their earning calculations will convert to good business.

Mr. J. J. Parekh Vice President- Sales of R. B. Electronic & Engineering Pvt Ltd. was quite happy with response they got from India ITME - 2008. Commenting on visitors he said "In spite of global slow down and financial crises in the world in general and textile and garment industry, in particular, we had around 500 visitors out of which around 200 were active inquiries and rest were for their future needs that was satisfactory for us."

Although he didn't seemed quite happy with other amenities of the show and expressed his views in following words "In terms of Facilities and other criteria there were some grey areas but considering ITME India was first time at Bangalore we under stand their difficulties and hope next time around things will be better."