Kashmir is a state rich in cultural heritage, with abundant wealth of religion, arts, crafts, attire and music. The rich and deep rooted traditions of the state can be glimpsed in their clothing, food, culture, and many other ways. The clothing culture of Kashmir is the manifestation of unique socio-cultural ethos of the state. 'Pheran' is one of the most enduring symbols of Kashmiri culture. It is a customary clothing of the state that speaks the tradition and craftsmanship of the local artisans. 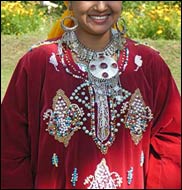 For many generations, all people, young and old, men and women have worn this long robe to protect them from the harsh winter winds. A combination of gown and overcoat, Pheran is a great leveler. It is a loose fitting gown worn for protection against the cold weather. It is generally made in wool and after tailoring, it is embroidered with floral motifs and craft traditions of the centuries. It is usually worn in pain, and the robe hangs down below the knees. The under layer is called 'potsh', and is normally in light white cotton. Kashmiri women wear pherans with wide sleeves and exclusive embroidery work, while men wear it plain, narrow sleeves, and with chest open collar. The loose sleeves of the garment are decorated with brocade. Initially the dress was long, now during the span of time; the length of the robe shortened gradually, and is in much fitting. Decorated pherans are an integral part of a Kashmiri bride's trousseau.

With the onset of chilly winters, and dense fog, pherans normally see a high demand. It adorns the wardrobes of the well heeled, who wear it for occasions to suit their personal tastes. This traditional apparel retains its charm not only among the people of Kashmir, but also among the visiting tourists who shop around for this exclusive Kashmiri masterpiece. It easily scores over the current day's winter costumes due to its warmth, and ease. Due to its evergreen popularity, pheran has become synonymous with a Kashmiri's identity.

Reinventing Charisma of the Kashmiri attire:

The dress consists of most intricate patterns, which are embroidered by a combination of vibrant colors and hues. Though many alluring outfits are introduced in the market every now and then, people prefer the good old phrean to tackle the chilled season in Kashmir. Over the years, changes in the patterns and embroidery have made the pherans appear trendier and appealing. Ivory pherans adorned with aari embroidery, black Kashmiri pherans with needle embroidery, and moss green garment with aari work are a few modern versions of this age old outfit. This traditional Kashmiri attire has cast its alluring spell over the tourists who prefer to take this dress as an ideal souvenir. Embellished pherans are considered as an exclusive 'work of art', and are seen in the markets of Kashmir as a tourist attraction.

Embroidered, designer pehrans in delicate pashmina is never a target for the swiftly changing fads. Indian fashion designers are inspired by pheran. Many of their designer wears have the look of a pheran. They are frequently seen even in the fashion galleries of Paris. From fashion's purview, this outfit is loose fitting, paving way for more fitted silhouettes and short lengths.

This lovely attire gives the beautiful Kashmiri women a more graceful charm. During the passage of time, many appreciable changes have taken place in the dressing style of the Kashmiri's. Despite, the transformations in the fashion world, pheran continues to be a part of the rich Kashmiri tradition and culture. This unique garment gives warmth to the people, and no dress has come to replace the good old pheran.