Slow rate of modernisation along with shortage and rising cost of power are likely to hit the textile industry in India. ETIG takes a closer look at the industry's performance in FY09

The end of the Multi Fibre Arrangement (MFA) in 2004 was expected to usher in a golden era of growth and profitability for the domestic textile industry. Though its three years since the opening-up of the global textile trade, gains are still illusive for the shareholders of most of the listed textile companies. The sector has been a clear laggard in the last three years and the stocks have also reacted in a predictable fashion. The combined market-cap of the top-8 listed companies such as Raymond, Arvind, S Kumar Nationwide, Welspun and Vardhman Textile among others has fallen by 35% while those of the Sensex companies have increased by 50% since the beginning of January 2005. 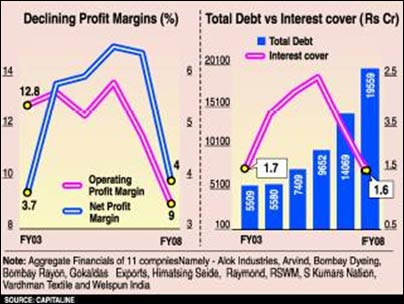 The poor performance of the industry is attributed to the domestic companies' inability to compete effectively with other low-cost destinations such as China, Bangladesh, Vietnam and Sri Lanka. India is the worlds third largest cotton producer and a hub of comparatively cheaper and skilled labour. The domestic textile manufacturers were expected to benefit from this and grab a sizeable portion of textile markets like the US and European Union (EU) where India's share in total imports ranged 2-4% between early 2002 and 2005.

Many companies used the opportunities thrown open by the expiry of MFA by drastically scaling up their exports. However, export-led top line growth came at a huge debt burden restricting profit growth. For the past three years, companies took advantage of fiscal support like cheap credit under technology upgradation funds (TUFs) to increase their production base and scale up exports. As a result, the total debt of 11 companies in our sample increased at a compounded growth of 37%, while gross block grew by 29% CAGR during the period.

The consequent rise in interest burden and depreciation allowances is now straining the balance sheets of companies, as reflected by the adjacent chart which shows aggregate financials of 11 companies in the sector.


Against this, the combined net sales and exports of these companies, showed a compounded growth of 21% and 19%, respectively. This also included effect of a compounded annual depreciation of 3.5% in the Indian rupee, without which, exports would have been more sluggish in volume terms. Besides a passive export growth, the declining profitability is also reflected in deteriorating interest cover ratio (ICR), which has more than halved in the last three financial years. ICR is a ratio of operating profit to interest payments and shows a company's ability to service debt. The higher the number the better it is.

In volume terms, India's share in total US imports of MFA fibers continued in the range of 5-6% between the calendar year 2006 and 2008, even as it emerged as the third biggest exporter to the US. On the other hand, it continued to miss out in export share of the EU market to Turkey and other European countries due to disadvantage of proximity.

The picture so far indicates that while Indian companies have equipped themselves to reap the supposed benefits of the free global trade, rising competition from low-cost suppliers from Asia along with structural and resource-related barriers have weighed heavy on the profitability of the sector.

Even as India is believed to have relatively cheap and skilled labour force, the export-oriented production is wage sensitive considering the level of skills and productivity required. Lower modernisation rate along with shortage and rising cost of power in major textile producing centers seem to be affecting the operations of medium to small-size companies. In FY2009, the industry is expected to suffer an additional blow of the slowdown in developed nations while Bangladesh and Sri Lanka are catching up with India in unit labour cost. Indian companies are also yet to show competitive strength in high value design and fashion segments in order to offset the loss of volumes to their Asian competitors.