The Oriental Carpets and The Turks 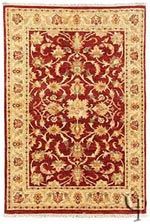 The carpet is a gift from the Turkish people to world civilisation. The knotted rug, the earliest samples of which have been found in Central Asia where the Turks used to live is an art form discovered, developed and it wherever they have traveled.

In order to protect themselves from the cold of the Central Asian steppes where they used to live, the Turks invented the carpet using lamb's wool which was abundant, and finds from Central Asia prove this. Turks have taken this art form with them and spread it whenever they have traveled.

In the 1940s, when the Russian archaeologist Rudenko was excavating burial mounds at Pazyryk in the foothills of the Altai Mountains in Siberia where Turkish people used to live, he discovered the earliest surviving carpet in the world in the fifth of the mounds. Dating from between the 3rd and 2nd Centuries BC, this carpet was woven using the Turkish knot and it is generally accepted that this carpet is attributed to the Asian Khuns.1

The carpet is a woven textile which is produced by knotting coloured threads on the warp, compressed by the weft. Two types of knots are used in producing carpets: The Turkish (Grdes-symmetrical) knot is wrapped around two warps and the Persian (Sineasymmetric) knot around a single warp. The Grdes knot makes a carpet stronger, firmer and more durable, while the Sine knot allows the weaving of different patterns. The tighter the knots, the finer and stronger is the carpet.

Turkish carpets and kilims are in the most valuable collections of museums and collectors in the world. Today, world museums exhibit as their most important and valuable works of art the carpets woven in Anatolia, beginning from the Seljuk period and continuing with the Ottoman Empire.

Turkish carpets have had a vast influence on an extensive zone ranging from Central Asia to Europe. From the middle of the 15th century, carpets exported from Turkey were highly appreciated in Europe and Turkish carpets played a large role in the social life of Europe. These carpets are reflected widely in the paintings of the time and they are illustrated precisely. This interest, which grew and continued in the 16th and 17th centuries, especially during Renaissance period, is shown the existence of at least one or more Anatolian carpets in portraits of aristocrats, religious figures or other illustrations. Turkish carpets were so highly prized in Europe that they more often graced the table than the floor. Because Turkish carpets were highly esteemed, possession of a Turkish carpet was regarded as a status symbol. Hans Holbein, Lorenzo Lotto, Carlo Crivelli, Hans Memling, and Gentile Bellini are some of painters who used Turkish carpets in their paintings.2

By:
Oguz KUYUMCU
Published: Jan 2009
Reuse this Content
Our Clientele