In an ever more competitive global market which represents close to $700 billion, the textile industry is seeking new sources of innovation, one of which is biotechnology. In 1996, the global enzyme market for textiles amounted to just $178 million. However, textile and Apparel companies are now spending more time and money on environmentally relevant issues. Regulatory pressure is expected to intensify for both textiles and leather as less polluting technologies become available and it becomes possible to generate less waste.

Enzymes have been used in textile processing since the early part of the last century to remove starch-based sizing, but only in the past decade has serious attention been given to using enzymes for a wide range of textile applications. Enzymes are expected to have an even greater impact on effluent quality as more fiber preparation, pre-treatment and value-added finishing processes convert to biotreatment. In addition, enzymes are very effective catalysts even under mild conditions and do not require the high energy input often associated with chemical processes.

Biotechnology makes it possible to produce cotton with improved fiber features. Agricetus has produced a genetically engineered cotton which contains a bacterial gene that produces a polyester-like substance that is reported to have the texture of cotton but to be much warmer. Zeneca uses microbes to produce a naturally occurring polyhydroxybutyrate (PHB) by bacterial fermentation. Monsanto is now investigating genetically engineered plants to be used to produce PHB. Weyerhaeuser has already commercialized bacterially derived cellulose which is finer, more uniform, and more resilient. Sony has developed stereo speaker cones and diaphragms from bacterial cellulose.

DuPont has developed a microbe-based fermentation process for the manufacture of 1, 3-propanediol, a key ingredient in pclytrimethylene terephthalate, a polyester that is superior to the widely used polyethylene terephthalate (PET), but which was previously too expensive to make in large amounts.

Cellulases are also gaining widespread use in the production of the relatively new fiber, Iyocell, the generic name for solvent-spun cellulosic fibers. Lyocell is spun from wood pulp in a closed amine oxide solvent system. The solution is then filtered and extruded to form the filament. Compared to other man made fibers (such as rayon), Iyocell has greater strength and a more environmentally favorable manufacturing process. However, the fiber tends to fibrillate during processing. This fibrillation is unique to Iyocell and can be controlled by cellulase treatment to achieve a soft, luxurious fabric and laundering fastness. In one case, Iyocell was treated with Primafast(r) SGL cellulase from Genencor International, which is an engineered cellulase composition designed specifically to achieve the desired performance.

Cellulose-based fabrics such as cotton and linen, but also synthetic cellulosics such as rayon, can form unsightly little "bobbles" on the surface. Courtaulds Chemicals has recently developed a new cellulosic fabric from Iyocell fiber, called Tencel, which has better strength and handling properties but is subject to this defect. Coats Viyella Clothing Stevensons, a UK company, in conjunction with Courtaulds, has shown that enzyme treatment prevents this problem. "Once this process has been carried out, the fabric is stable for the rest of its life", says Dr. John Scotney of Coats Viyella Clothing Stevensons. 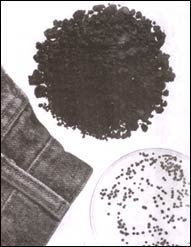 Jeans, manufactured from denim, are one of the world's most popular clothing items. The "stonewash look" has been traditionally achieved by locally removing the indigo dye using a process in which pumice stone is added to the washing drum to abrade the garment. Enzymes can be used to facilitate removal of the indigo from the yarn surface. In practice, three washing methods can be used:

Today, biostoning is the main process used in the denim finishing industry, a shift promoted by process economics, fashion and, to a lesser extent, environmental impact.

A life cycle assessment was performed on the three methods of reducing the indigo content and the three process steps specifically related to the production of stonewashed jeans: stone washing, wash off (removal of the stones), and wash (clean-up of the garment). Only these three steps were covered by the LCA.

The biostoning washing method scored best on eight out of ten environmental parameters. The "combined" washing method scored best for water toxicity because of higher emissions of phosphorus compounds into water from the biostoning washing method. The pumice washing process scored better under the heading "odor" mainly because of the ammonia, emissions from agriculture and from the production of ammonia for fertilizers used in the raw material production for cellulase fermentation.

A cost comparison based on environmental regulations or needs was also made for the three washing methods. The highest costs arise from wastewater treatment and were for the pumice method, the lowest were for biostoning. These cost differentials will increase if potential future standards for sustainable development are to be met.