Patterns in nature result from dynamic relationships of forces and constraints. What is analogous for patterns in art? Art is created by human hands motivated by inspiration and thought. It is the product of creativity and skill. Creativity is constrained by cognitive processes and skill by the limits of technology. Based upon the authors studies of Oriental carpets, this paper suggests that patterns in art result from dynamic relationships of choices and constraints.

Typically, traditional Oriental carpets from historical rug-weaving regions of the world exhibit a multiplicity of patterns-field patterns and border patterns that express a vast array of designs and various possibilities for their repetition in linear arrangement or to cover a plane.

In classical Oriental carpets, the repetition of a design to cover a pattern is accomplished by counting and repeating sequences of knots. This paper explores dynamic relationships of choices and constraints, by which weavers have used both symmetry and symmetry-breaking to transform repetitive patterns into great works of art.

Question: In what ways are the seashell and the Oriental carpet (Fig. 1) similar? Answer: They both have patterns that grow only along the leading edge; hence, they both preserve in their visual aspect a history of their growth. 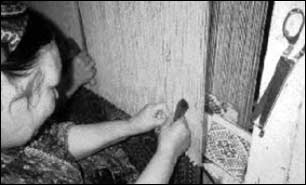 Necessarily, the analogue for "forces" must take into account the fact that Oriental carpets are the products of human hands. The pile is constructed of segments of wool (or other fibrous material) manipulated by the fingers around pairs of warps - the longitudinal set of elements held taut by the loom, which is a frame devised to hold these elements tight (see BEATTIE, 1983). Interlacing wefts create a fabric of warps and wefts; the knots, which form the pile, are supplementary to the foundation fabric. The pile carries the colors, designs, and patterns, while the warp and weft are generally hidden (Fig. 3). 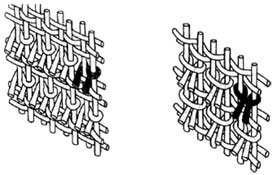 The initial force to make a carpet is the impulse or decision to do just that - to make a carpet. Let us characterize this as intent. Following this, the weaver must choose to pattern the carpet. For a carpet in order to fulfill its primary functions of shelter, insulation and warmth, need not have a pattern. A weaver might use, for example, a single color of yarn, or undyed yarns. That would yield a functional product, but not one invested with beauty. It would be cheaper in terms of both labor and materials (fewer dyestuffs or none; no dye processes). But, typically, multiple patterns co-exist in any given carpet. Traditionally, designs are arranged in the central field and borders of a single carpet according to varying systems of repeat. The profusion of patterns contributes to the sense of complexity and intricacy, which so characterizes the apparent visual aspect of Oriental carpets. So, for there to be patterns in Oriental carpets, there is both intent and choice. In art, these may function as analogues to the role of forces in pattern formation in nature. Intent and choice -what more? What about creativity? Originality? What about tradition? Style? Culture? We will explore each of these components of carpet production in turn briefly.

Patterns in carpets rely upon repeated sequences of knots; the knots are counted by the weaver as they are placed, and repeated across the row in particular sequences of knots such that the succession of knots is directional to the right, or to the left. But they may be placed with imperfect regularity, but in any case, row by row in sequence. Each successive row, again, provides a set of choices for the weaver. For any irregularity, at some point there must be a correction to maintain the rectilinearity of the carpet, and to yield a product that has the integrity of its central field with surrounding borders. The smallest unit that can be repeated is a single knot of one color. But such a repetition in the field would create a carpet of one color and no pattern (as defined by color). At the other extreme, consider the permutations and combinations in a carpet using seven colors.

Theoretically, for any given knot there are seven choices. In a carpet with an average knot density of 100 knots per square inch, that translates to 7 x 7 x 7 and so on to 7 to the 100th power! If you increase the numbers of knots per square inch 220 (not unreasonable, say, for a Turkmen rug), the resulting figure is 7 to the 220th power, which is more than 8 with 185 zeros after it! Thats an amazing number of choices- potentially creative choices- for each square inch of carpet. What is it that limits the weavers choice?

The possibilities for choosing a pattern are not a paint-by-number exercise. But here we may cite three groups of constraints that come to mind that counter the forces of choice: The first group is characterized by physical constraints: patterns in carpets are somewhat restricted by the rectilinearity of the loom, in particular, by the set of longitudinal warps on which weaving takes place to create an orthogonal grid. Then there are also the physical constraints associated with warp length and beam width, restricting the size of the finished object.

The second group we may associate with social constraints into which I would place the role of tradition. The evolution of a tradition involves change over time, but the changes are small and insignificant enough not to diverge substantially from an evolutionary course of development. We can at times recognize periods of momentous change and attribute these to specific events, ideas, or new technological developments that dramatically affect the course of tradition. But, in general, we may generalize about the role of tradition as a constraint, determining the range of a weavers choice in selecting a pattern and a set of colors in the process of rug-weaving.

The third group of constraints is spatial. It includes the laws of symmetry, which are equally limiting in nature and art. While the possibilities for a design may be limitless, once the weaver chooses to manipulate that design to form a pattern, she is constrained by the laws of symmetry.

The technologies of rug-weaving are very simple compared to other textile technologies (see BIER, 1996). Because color, design, and pattern are all carried by the pile, the patterns in carpets are two-dimensional. Other woven textile structures yield patterns in which a third dimension must be taken into account mathematically. Pattern-woven textiles, generally, represent technologies in which the repetition that forms the pattern is affected mechanically. In mechanical repeats, symmetry-breaking is achieved repeatedly only through weaving errors that occurred in setting up of the loom. Thus, patterns in hand knotted carpets offer unique possibilities for the study of two-dimensional patterns in art (BIER, 1997). They represent mathematical concepts, related to both number theory and pattern theory, which rug-makers may understand intuitively (BIER, 1992).

As with any square grid, hand-knotted rug patterns may render visible the arithmetic systems of addition, subtraction, multiplication and division, as well as squares and square roots, grids and geometry, points, lines, angles and shapes. Field and border patterns in carpets relate to algorithms, topology, sometimes knot theory, even fractals, which may all be taught using carpets to counter innumeracy. Weaving at the simplest logical level - interlacing wefts with warps in a sequence over-one-under-one - can be related to linear algebra. More complicated weaves render geometrical combinatorics visible. But the actual mathematical knowledge required on the part of the weaver is minimal. For in order to make what appear to be complex patterns, only simple algorithms are necessary. Once a generating unit and its mode of iteration have been determined, the temporal process of pattern formation carries the craftsman from choice to completion.

Symmetries - and patterns- in rug-weaving are affected by the construction and placement of individual knots. The knots, set in repeated sequences, form a pattern with a correspondence of points of colored yarns. If a knot is placed in a different color than that which is expected, or a particular color appears in not quite the right location, that results in symmetry-breaking.

What is most often cited in Western literature is called mistakes. But an obvious form of symmetry-breaking is in the arbitrary cutting off of an infinitely repeating pattern by a border or borders which surround the central field. There are also many other techniques by which symmetry-breaking are effected. I dont believe that mistakes are the basis for most symmetry-breaking. The majority of such inaccuracies are not flaws. Rather, they are expressions of a deep appreciation on the part of the weaver for the meaning of beauty and the nature of art through the processes of pattern formation.

The process of weaving a carpet, knot by knot, results in a fascinating relationship between numbers and patterns that is logical, predictable, and mathematically based. These relationships are inherent to the temporal processes of pattern formation. Both arithmetic and geometry are at once present, operating conjointly. They may be ignored on the part of the weaver, or played with purposefully to draw out inherent ambiguities in patterns. The grid of knots, side by side and above one another, is predicated upon the underlying interlacing of warp and weft. But the placement of color in repeated sequences thus sets up a series of relationships of corresponding points such that a plane pattern is established in which circles and centers are implied theoretically by the layout of the pattern (ALEXANDER, 1993). Rug-weaving is at once a unitary process, accomplished knot by knot, and a systemic process that results in a multiplicity of patterns effected by choice on the part of the weaver. While patterns in nature result from forces and constraints, patterns in rugs are the result of choices and constraints. Symmetry offers possibilities for the weavers, which are at once choices and constraints. While the possibilities for the composition of a design are limitless, once a weaver chooses to manipulate that design to create a pattern, the laws of symmetry limit those possibilities (see STEVENS, 1981). Patterns are restricted by the laws of symmetry - unless they are broken.

Although mathematicians treat symmetry as an ideal, in nature all symmetry is approximate. The study of patterns in Oriental carpets may lead one to suppose that in art, as in nature, it is in the approximation of symmetry, rather than in its precision, that beauty is to be found. These carpets attest to a high degree of human creativity and ingenuity, but I think they express a genuine appreciation of a beauty informed by form, pattern, and structure. The study of patterns and pattern formation in Oriental carpets provides insights into the nature of beauty, which relies upon the beauty of nature in the realm of human choice.

By:
Carol Bier
Published: Feb 2009
Reuse this Content
Our Clientele