Are Two Heads Really Better Than One?

Embroidery machines exist in a wide variety of sizes, from one head up to 30 heads and even more. With multi-heads, the four-, six- and 12-head models are more predominant than the 20-head-plus mega-machines, but still the choices are many. So how do you choose the best machine for your business and your customers' needs?

The majority of new embroiderers start with a single-head machine and move on from there. Though sewing quality and operational features vary from brand to brand, the typical single head can handle a wide variety of garments including caps, shirts, jackets, aprons, etc. And when outfitted with specialty attachments, the repertoire of products expands to include CD cases, golf club head covers, wine bags, shirt pockets, pants legs, pet collars, etc. Single-head machines usually can sew at higher speeds better than multi-heads. And of course, the small size and simple power requirements make these machines ideal for home-based operations. The most common reason for purchasing a single-head machine is the cost.

Since most new embroidery shop owners have reservations as to how successful they'll be, they look for ways to enter the industry with the lowest investment possible. There's nothing wrong with this thinking, as long as the machine you choose does what's needed to bring in the revenue required to operate your business.

However, buying the wrong equipment, no matter how cheap, may impact your ability to provide the products and services needed to make a legitimate profit. 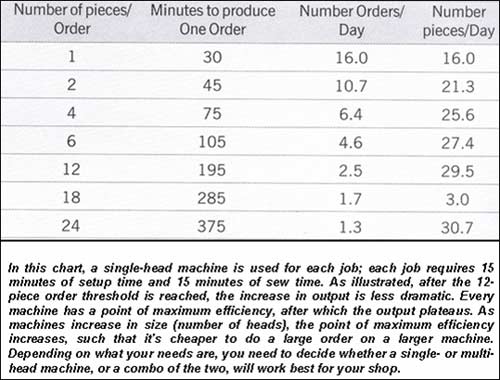 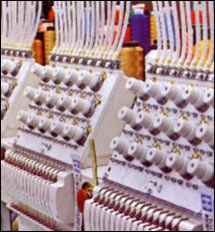 Assume that the average sewing job has 7,500 stitches and six colors. Running at a speed of 800 spm, and taking into account speed variations, trims, color changes, etc., the sew time works out to about 13 minutes. Removing a finished hooped garment from the machine and replacing it with a new one will add another minute or two, so we would need about 15 minutes for each run.

Initially, it would seem that a single-head machine would produce four pieces per hour; a two-head machine, eight pieces; a four-head machine, 16 pieces; a six head, 24 pieces, etc. But that's only when you're running the same job over and over again. In reality, a certain amount of downtime is incurred every time a new job has to be set up. Such downtime includes changing out thread cones, loading a design, programming needle sequences, changing the pantograph from tubular to caps, etc. The more heads, the longer the potential downtime. Thus, it's usually not economical to use a multi-head machine for small runs, as you may spend more time setting up the machine than actually sewing.

Every machine has a point of maximum efficiency, which is based on the machine's capabilities and the job's parameters. In the chart, I've assumed that a single-head machine is being used and that every job is roughly the same in terms of spm to run time. In addition, I assume that the machine operator spends 15 minutes to get each job set up and running.

As you can see, a 12-piece job is much more productive than a series of one piece jobs. However, after the 12-piece order threshold is reached, the increase in output drops off significantly. This illustrates a very important point: Every machine has a point of maximum efficiency, after which the output plateaus. That's not to say that you can't run a 200-piece order on a single head; it just won't be any cheaper than running a 12-piece order, though the customer will be expecting a significant discount because of the order's higher volume.

As machines increase in size (number of heads), the point of maximum efficiency increases as well, such that it's cheaper to do a large order on a large machine than it is to do the same order on a small machine. As your average order size increases, you'll need to consider a larger machine to get each job produced quicker and cheaper.

But just buying a larger machine may not be the right solution, as there's another angle to consider: How many jobs need to be produced simultaneously?

It's rare that your jobs actually arrive in a nice neat sequence, such that delivery times can be staggered over a long period of time. It's much more common to have multiple jobs due at the same time. While buying a larger machine increases your overall production capacity, it doesn't necessarily improve your ability to deliver because it still only lets you sew one order at a time, when in many cases you need to be able to produce several orders at the same time.

Since most manufacturers offer the ability to network multiple machines together, you can get creative in how you set them up. With single heads, there are certain limits. Production studies have shown that in most situations, one person can manage three single heads effectively at the same time. Thus, if you invested in six single heads, you might need two operators in situations where you're running all or most of them on separate jobs. In comparison, one person can manage a six-head machine alone.

So, what's the best machine for you? It's all about how your orders break down and what the most effective setup to manage your workload is, while providing flexibility and versatility. If you're a growing shop, typically two heads are better than one.

By:
Jimmy Lamb
Published: Mar 2009
Reuse this Content
Our Clientele