The 'Shirt' and 'Bed spread' with Geometrical Diamond what you see in the photos are recently developed in Weavers' Service Centre, Bangalore. The shedding system used to produce this designed Shirt and Bed spread is not any Jacquard or Dobby or even 8 healds. It is simply woven with the aid of 4 healds and 6 treadles combined with a new formula used in Group drafting. The New Drafting system is named as "Stitched Colonial Group Drafting System" which is derived from the original Colonial Drafting evolved by Shri. Edward E. worst (12, 23, 34, 41- 4 Groups)

The salient feature of this new Group drafting system is its self stitching of figuring extra weft by one end after every three ends both in face and back side. Where as, the extra weft in the original Colonial Drafting System, floats to form the figure. Hence in the original colonial drafting system each group can not be repeated more than certain number of times in order to avoid lengthy weft floats. In the New Group drafting system, each group can be repeated any number of times to produce required width of each group.

The new 4 group Drafting System in 4 healds combined with 6 treadles enables to produce two up two down Twilled 4 group design in any required width and length in stitched extra weft principle along with plain weave in the ground. Manipulation of these 4 groups in pointed draft style results in all types of wavy Twilled motifs (2/2 Twill Based) by operating the treadle groups in straight order and also results in various types of diamonds (2/2 Twill Based) while the treadle groups are operated in pointed order as given in the Table.

The Shirt what you see in the photo is stitched from the cloth produced by using new group drafting system which shows that this new system is very useful to produce Geometrical twills, wavy twills and Diamonds which in turn used to stitch any "Engineering Designed Garments" when Graph Designer and Art / Fashion Designer exercise their imagination keeping the customer's need. 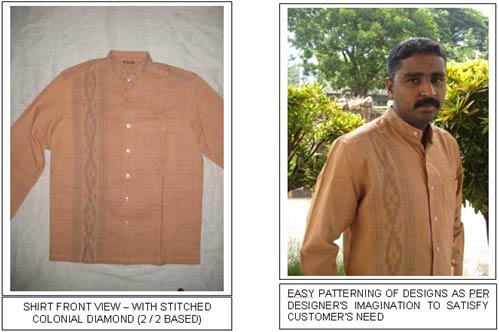 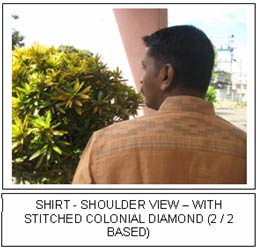 Similarly all the furnishing materials like Bed Spreads, Pillow covers, Table mats etc., can be woven with these Designs along with plain weave. 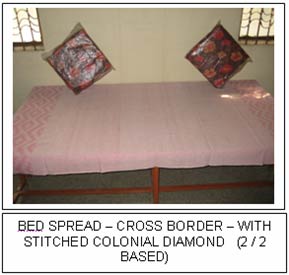 I, II, III, IV, Group can be drafted in Straight or pointed order.

I, II, III, IV, Group Can be operated in straight or pointed order.

By:
R.G. Panneerselvam
Published: Mar 2009
Reuse this Content
Our Clientele