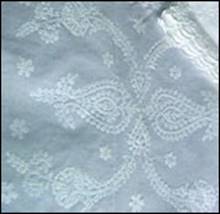 The moment you come across the term chikankari, the mind starts building images of white fabric filled with white embroidery. The designs itself are like flights of fantasy, ranging from small delicate portions to elaborate affairs. It has that irresistible magical affect in itself that one just can not resist the urge to own a piece. Every wardrobe especially in India has at least one chikankari garment and it is also one of the most sought after products or gift items by the immense number of tourists that visit India. But do we actually know what chikankari is? What pains are involved in the production of one single small item? Who are the people behind such beautiful pieces of art? (Chikankari is so breathtakingly beautiful that it can be justifiably compared with art)

Surprisingly we just walk into the renowned retail stores, walk through the various aisles, pick the one that we like, pay and flaunt it in front of our friends. We are least bothered about its origin, its development or its finishing. In order to enlighten ourselves for this purpose, let us move our base to a small village in the state of Uttar Pradesh in India. 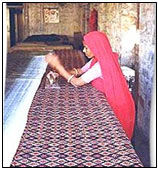 People might wonder why a village and not Lucknow? After all among other things, Lucknow is famous for Chikankari. But unfortunately, we cannot just give the credit of chikankari to Lucknow itself. Although chikankari was first introduced in Lucknow, but in today's times this embroidery is being done in various clusters (villages) in and around Lucknow. In these clusters Chikankari products and fabrics get developed in the hands of mostly women from all age groups. We can find even kids aged 10 in this trade as well as older women of late 50s or till the time they have a good eyesight.

The development of the product starts with selection of the design. Traditionally these designs were the typical paisley motifs and floral bunches, supported by leafy creepers, mostly of Mughal origin. The modern consumer's demand has even brought modifications to these. As the merchandise is changing from saris and salwar kurtas to tops, shirt and tunics, the designs are also becoming more contemporary. A paisley would still remain a paisley but with a modern touch. So the present day designs or motifs have a fashionable touch of some other value addition like sequins, mirror work, zardozi etc, just to be at par with the fashionable crowd.

The chosen design is then engraved on to a wooden block. (Mostly sheesham wood is used.) The problem with wooden blocks is that with time the edges become blunt, so the design which is printed on the fabric becomes very thick, creating a problem for the final washing and finishing of the design as well as hampering the intricacy. Off late blocks are being made with a wooden base with the design on a metallic surface. The same motif can be given a 3D look or a flat look by means of the stitch type being used. The selection of the motifs is governed by the: 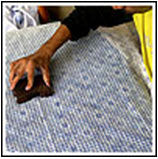 The layout of the design again depends on the printer who is doing the block printing. We do have designers who give a brief about the kind of work they are looking for, but mostly the printer handles things his way. The only fact that they think important is the costing of the product. So an expensive garment would have an intricate layout of design with very less negative space while a lesser costly garment would have sparingly placed motifs. The basic material used for transferring the design is indigo (Neel) and diluted glue. Incase the indigo color is not visible on the fabric then silver color is used.

The embroidery stitches used here are so elaborate that there are specialists for different groups of stitches. In one single product the jaali (net work) will be done by one person, the phanda (a 3D bulbous dot, similar to the French knot), done by another person and the bhakhiya (shadow work involving herringbone stitches) done by yet another person. So more the amount of stitches more is the labor involved and naturally more is the costing. The other common stitches used are taipchi, murri, ghas - Patti, keel kangan etc.

The final stage in the entire process is the washing and the finishing. Before the normal wash the fabrics or garments are soaked in certain diluted acids followed by a soak in bleach and soda. All this is done to fasten the colors and to make the white look whiter. Starching the garments is done to give them a stiff look ill the time they reach the retail stores. It is said that the final look of the garment depends on how well the garment has been washed and ironed. 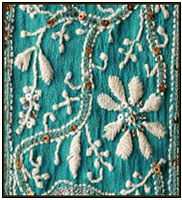 The colors involved in the chikankari garments and products (apart from the traditional white) have also started imitating the fashion scenes and some way of color forecasting is definitely done, because each season the stores do have the "IN" colors. So the consumer will have all options from a minty green to a sunny yellow to a fuchsia and a turquoise. The same goes for the fabrics also. Cotton was there and will always be a part of the traditional chikankari craft. But for the maintenance free consumer of today there are options like chiffon, georgette, net. Some have also started experimenting with denims and wool. Who says Chikan is for Spring-Summer, it can be very much for the Autumn Winter collections as well.

As far as the origin of this craft is concerned, there are various stories. Some say that it is a Persian craft, some give the credit to Noorjahan, and some say that it was a saint who taught the craft to the villagers so that they can earn their living. There is no tale which has authentic facts to support its truth. Whoever started this craft, had definitely given boon to the artisans as well as a fashionable delight to the rest of the world.

The chikankari craft is developing in leaps and bounds today, because the demand and awareness has increased manifold. But with its development the development of the artisans (mostly women folk) is also important. Innovation, experimentation and active involvement of good business practices can be a key to this.