Will Obama play a tough role against China?

President Obama has been critical regarding the monetary policy of China. But now, critics are voicing disappointment. 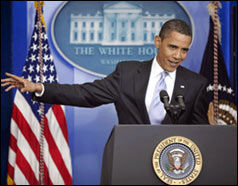 The Obama reign may prove to be a turning point in the US trade policy with China. Earlier Obama had assured to consider the impact of Chinese trade on the countrys economy and jobs. Experts' opinion says that Obama would like to implement strict policy measures to tackle the Chinese currency manipulation and unfair trade practices. The new policy would bring strict implementation of anti dumping, and unlawful subsidy laws relating to imports from China.

During his presidential campaign, Obama was critical about the monetary policy of China. He pledged to be tougher on China than President Bush. At the beginning of the year, officials of the Obama administration remarked that recession was not a time for trade wars. The report released by his Treasury Department did not mention China as a currency manipulator. Economists believe that China is deliberately keeping its currency value down so as to trim down its export costs. They observe that, this will help the Asian giant to maintain its growth in the shrinking global economy.

But, currently the President has signaled his willingness to restrict the surge of Chinese exports into the country. His administration has recently announced to bring its first case against China in WTO (World Trade Organization) if discussions do not solve the issue. It states that China is unfairly restricting the exports of its raw materials, which have a desperate requirement in the U.S. China is defending itself by saying this was only to protect the environment, and improve the composition of its exports.

Apparel brands manufacture textile and apparels in a quota free environment. Quota restriction on 34 textile and apparel import categories of China which was established during 2005 has been removed. In the current atmosphere, possibilities exist that protectionist barriers might result in trade wars.

Now, the question that arises at the back of the mind is "Will Obama take a tough decision on the US trade relations with China?" The answer lies on how the President decides to handle the '421 safeguard' case by this September. Section 421, Trade Act of 1974 (China Safeguard Investigations) states that the Commission determines whether imports of a product from China into the United States in increased quantities or under such conditions are likely to cause or threaten to cause market disruption to the domestic producers of like or directly competitive products. If the Commission makes an affirmative determination, it proposes a remedy. The Commission sends its report to the President and the U.S. Trade Representative. The President makes the final remedy decision. (Source: http://www.usitc.gov)

Political critics observe that from the earlier historical records, Ronald Reagan, George W. Bush, and Bill Clinton have earlier declared during their election campaigns that they would change the export policy of US regarding China, but were not able to do much later on. Obama's priorities will be more focused towards handling the faltering economy, and facing countries like Iran, and Russia. It might be unfeasible for the President to make a big change in Chinas export policy.

By:
Fibre2Fashion
Published: Jul 2009
Tags :
Reuse this Content
Our Clientele