'The World's Textile Machinery Industry: An Overview of Trade Flows and Market Shares (2002-2008)'

World trade in textile machinery suffered a sudden halt in 2008. According to ACIMIT's estimates, the decline amounted to as much as 18% of current prices compared to 2007. These alarming figures for the sector are the result of the overall economic and financial crisis which has by now spread through all segments of the real economy. Major exporting Countries of textile and clothing items have observed a significant drop in export volumes, due to a slumping demand from European markets and the United States. A downsizing of production for many textile businesses has meant that plans for investments originally foreseen have now been inevitably postponed. 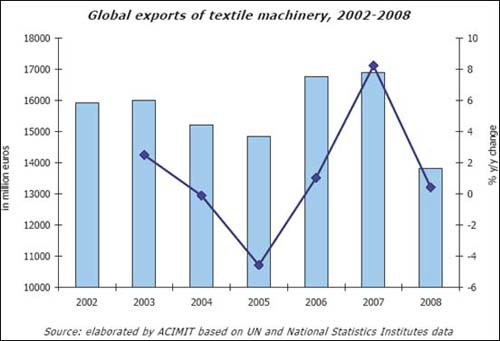 The primary textile machinery markets closed 2008 with a considerable downswing compared to 2007. In China, imports fell of 27%, and equally striking downturns have been observed for India (-33%) and Turkey (-47%). While three global markets produced import volumes exceeding a billion euros for 2007, in 2008 only China topped this threshold. Among the worlds top ten markets for textile machinery, an increase in demand was recorded in Bangladesh, Brazil and Indonesia. The growth in imports on the part of Brazil is especially relevant, at +42% over 2007. Extending this analysis to a broader group of countries, a boost in machinery imports was also recorded for Egypt and Russia.

All primary manufacturers of textile machinery suffered from a general downturn in demand, as documented by data relating to global exports. Germany recorded a 21% drop compared to 2007 levels, with similar decreases for Italy, Japan and Switzerland. However, Chinese exports were far less pronounced, declining just 4% compared to 2007.

As far as Italys textile machinery sector is concerned, figures from 2008 indicate a drop in production of 17% compared to the previous year, for an estimated value of 1.986 billion euros. This downturn has affected both foreign and domestic sales, with exports decreasing from 1.870 billion euros in 2007 to 1.569 billion for 2008.

Italian exports recorded increases in just an handful of global markets in 2008, Brazil and Russia being the most prominent of these. On the domestic front, the difficult situation confronting the entire textile/apparel industry has halted the demand for new machinery and technology, which thus dropped 21% on annual basis. 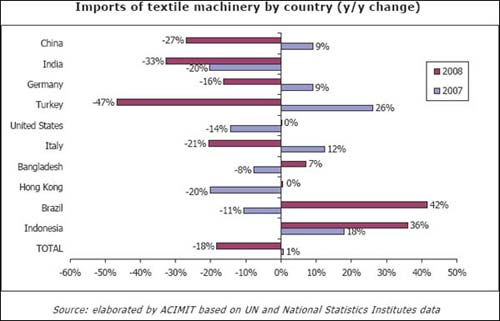 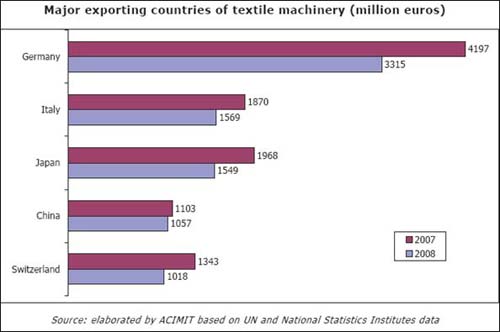 For 2009, market conditions will continue to engender a drop in exports, with data for this years first quarter not providing any comforting signs. Whereas production in the textile machinery sector is expected to remain stagnant for the current year, some positive signs do appear on the horizon for the industry downstream, since a slow recovery in textile production favours a reinstatement of stocks and measures adopted by major exporting countries in support of the industry. China may very well be the first market to rejoin the path to growth. The measures adopted by local authorities to stimulate the T/C sector, combined with a light recovery in primary sales markets for Chinese textile exports, will serve as an incentive to invest in new machinery and production installations. However, the markets in India and Turkey appear far less dynamic-at least for 2009. The textile sector in Turkey was hit hard by the global recession, as highlighted by the numerous closures of textile factories and consequent reduction in the number of workers employed in the industry.

Benefitting first and foremost from the recovery will be those sectors which proved more dynamic even during times of crisis. The non-woven fabrics market heads this list, as it has been capable of exploiting the increasingly widespread demand for disposable products in the health-care and personal hygiene sectors. This growth driver will also be flanked by the needs of enhanced infrastructures in many emerging Countries.

Once again, such a mid-term scenario appears to favour machinery manufacturers who are already well positioned in highly dynamic niche markets, or are capable of doing so rapidly, fulfilling the need for highly innovative content in products and production processes. Other textile machinery builders who are more explicitly tied to traditional textile manufacturing will need to enhance their efforts to adapt their technology to the demands of those now controlling strategic decisions (what and where to produce, at what prices, and which consumers to sell to): i.e. large-scale distribution.

Today's market dynamics are increasingly controlled by large-scale distribution, whose decision-making clout stems from the fact that they have surpassed manufacturers in terms of sheer size. Thus, rapid deliveries and minimal stock levels can no longer be considered merely "irritating" or "costly" services provided to a few customers, but have, on the contrary, become the markets very basis and a crucial competitive factor for efficient manufacturers.

The ability to readily and quickly customize products is indeed a factor which, at least in terms of product quality, represents a major option for the future of textile and apparel manufacturing in Europe and Italy. These end-market trends translate into business models that have by now become consolidated, such as fast fashion. As explained in detail in the 2009 Focus, textile machinery manufacturers that will enjoy success are those capable of proposing a flexible production model, adapting to the needs of the industry downstream.