Navajo rugs; the art which is approximately 150 years old having its origin from United States. Navajo people of the Four Corners area of United States are producing these rugs and blankets which is an important element of Navajo economy.

Navajo textiles were originally useful as cloaks, dresses, saddle blankets and similar purposes. At the end of 19th century weavers began to make rugs for tourism and export. Typical textiles have strong geometric patterns. Navajo weaving is similar to kilims of Eastern Europe and Western Asia, but there are definitely some noticeable differences. In Navajo weaving, the slit weave technique common in kilims is not used, and the warp is one continuous length of yarn, not extending beyond the weaving as fringe.

Navajo people acquired the lberian Churra breed of sheep from Spanish explorers and now this breed is known as Navajo- Churro. These sheep were well-suited to the climate in Navajo lands, and produced useful long-staple wool.

Initially at mid 10th century to dye Navajo weaving natural brown, white and indigo dyes were used. By the middle of the century the palette had expanded to include red, black, green, yellow and gray.

Earlier, upright looms with no moving parts were used to weave Navajo rugs and support poles were constructed of wooden or loom itself was set up between two trees. Now days steel pipe is used in place of wood. A lower and upper beam is attached to these wooden/steel pipe side supports. A smooth straight stick or dowel is suspended from the upper beam while another is lashed to the lower beam and upper bar is adjustable so it can be easily used to adjust the tension. The warp thread is strung back and forth between two inner sticks or beams. Artists sit on the floor during weaving and wrap the finished portion of fabric underneath the loom as it grows.

Navajo rugs were made from about 1800 to 1850 and consisted of black / brown and white strips. Generally top, bottom and center stripes were wider than the other strips while border stripes sometimes contained pairs of narrow indigo blue stripes and outlining in very narrow stripes if raveled red. 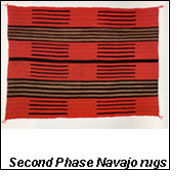 Navajo rugs included small red bars or rectangles at the center and end of the blue stripes and were made about 1810 to 1870. 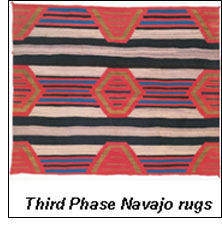 Navajo rugs are between 1860 and 1880 saw the addition of stepped or serrated diamonds of color to the center and ends of the wide stripes.  In this phase the center of the blanket featured a full diamond, with quarter diamonds at the corners and half diamonds in the middle of the border bands.

These weavings made from 1870 through the early years of the twentieth century, were actually products of the Transitional Period.  In this phase, the diamond motifs became larger and more elaborate; often overtaking the black and white stripes as primary design elements so all collectors can not recognize this as a distinct phase.

In modern time communication between Navajo reservation areas has been increased. There are also remarkable changes in the weaving style which are differentiated from region to region. To bring uniformity in weaving rugs new trends are set; Navajo wool is being sent to a commercial plant to be processed into wool then returned to the weavers. The weavers then dye these rugs with natural plant or vegetable dyes. Now days, most of the Navajo rugs are with fine weave and lighter weave so that it can be seen more as tapestries to hang on wall.