Factoring-A Step Ahead Towards Modernisation

Factoring has a long and rich tradition, dating back 4,000 years. Almost every civilization that valued commerce has practiced some form of factoring, including the Romans who were the first to sell actual promissory notes at a discount. The first widespread, documented use of factoring occurred in the American colonies before the revolution.

With the advent of the industrial revolution, factoring became more focused on the issue of credit, although the basic premise remained same. By assisting clients in determining the creditworthiness of their customer and setting credit limits, factors could actually guarantee payments for approved customers. Prior to the 1930s, factoring in this country occurred primarily in the textile and garment industries, as the industries were direct descendants of the colonial economy that used factoring so specifically.

As time is passing by, and we are moving into the modern era of instant communication and a shrinking world, factoring plays an important role in the todays business. The increasing interest rates that marked the 1980's and 1990 are led to an increase in the number of new companies turning to the factoring business. Factoring is a way to raise quick capital in a manner that was called "off the balance sheet" financing. Since accounts receivables are an asset account, factoring is a way to raise quick cash without adding the liability of loan.

Factoring is one of the oldest forms of business financing. It can be regarded as a cash management tool for many companies like garment industry where long receivables are a part of business cycle. Factoring is a service that covers the financing and collection of account receivables in domestic and international trade.

It is an ongoing arrangement between the exporter and factor. The exporter sells invoiced receivables at a discount to the factor to raise finance for working capital requirement. It bridges the gap between raising an invoice and getting that invoice paid. By obtaining payment of the invoices immediately from the factor, usually up to 80 per cent of their value the companys cash flow is improved. The factor charges service fees that vary with interest rates in force in the money market. The factor operates by buying the invoiced debts from the selling company. These are purchased, usually with credit control, collection and sales accounting work. Thus the management of the company may concentrate on production and sales and need not concern itself with non-profitable control and sales accounting matters.

Factoring differs from a bank loan in three main ways. First, factoring differs from traditional bank loans because the credit decision is strictly based on receivables rather than other factors like how long the company has been in business, working capital and personal credit score. Secondly, factoring is not a loan; it is the purchase of financial asset. Finally, a bank loan involves two parties whereas factoring involves three-buyer, exporter and factor.

There is some misconception regarding factoring like people believe factors are a lender of last resort but that is not true because exporters seeking out factoring are often in the beginning stages of growth. At first glance, factoring appears to be expensive but does a lot more; in essence, factoring replaces the accounts receivables and credit department.

How does it work? 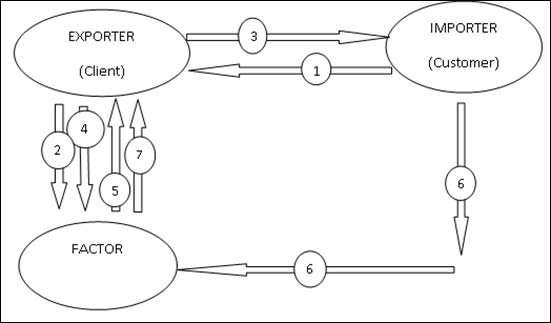 The above graph represents the model of factoring and the way it is being done.

According to World Bank, various taxes, legal and regulatory obstructions will block factoring services. "Factoring generally requires good historical credit information on all buyers; if unavailable, the factor takes on a large credit risk." It also points out that fraud represents another big problem in this industry (e.g. bogus receivables and non-existent customers).

Mr. Laxman N. Sankade, Managing Director, Canbank Factors Ltd, said: "For factoring to develop, it is imperative that an enabling legal environment be created and the Factoring Bill be passed in Parliament. It is also seen that a lot of weak companies would actually be able to tide over their liquidity problems if the receivables are acceptable to the factoring companies and which could be factored."

According to Mr. Basab Majumdar, Head-Factoring and Receivables Finance, India, HSBC, "Assignment of debt is still a cumbersome process and involves stamp duty which again is a State level subject and there is no uniformity in the rates of stamp duty across States. Moreover, every time a debt has to be assigned to the factor and stamp duty paid on the transaction, which has the potential of making the proposition expensive for the client. Most of the developed countries have implemented clear laws related to assignment/transfer of debt, bankruptcy, debt recovery, etc. Additionally in India, access to information on companies, their repayment performance with the banking system, etc is thinly available, which results in lack of information to decide on credit." 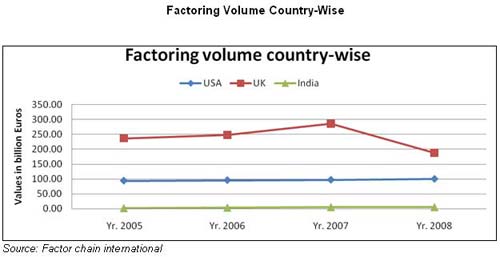 In 2008, the total world volume for factoring increased by 2 per cent, compared to almost 15 per cent in 2007. We can see that Europe has shown an upward trend till 2007, and then a downward trend. If we see the trend of Asia, it is stagnant in initial years i.e. till 2006 and then has shown a little upward trend till 2007. After 2007, a notable increase is seen and thus factoring volume crossed 200 billion. Africa and Australia showed a similar and a stagnant trend. The factoring volume of America is very similar to Asia, but after 2007, Americas factoring volume is seen stagnant only The overall results illustrate that exporters and importers, around the world, are becoming more and more familiar with the advantages to be derived from a factoring arrangement: working capital, credit risk protection and collection service for the exporter. 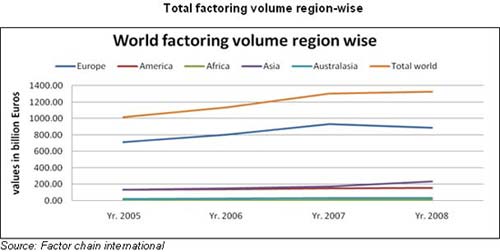 It is quite implied now that factoring is a very easy and fast method. Still, its implementation is not so good. There are certain hiccups that have come up in the way of releasing the full potential of factoring in India. One of the main reasons for it is the legal framework of India. Generally factoring companies need legal protection as all advances are uncollateralized, protection for the same is not provided.

Still there is only one direction in which factoring can go in India: upwards. As the awareness level about the benefits of factoring increases, factoring will spread its wings across the length and breadth of the country.