Art of Embroidery from the Land of China

Embroidery is a very old and well known art of China. In China, Embroidery is not ruled by only women but men and women both are involved in this art. There are two main division of Chinese Embroidery, "Chih wen" and "Tuan chen". In "Chih wen"   long and short stitches are used to embroider the cloth while in "Tuan chen" the seed stitches are taken. This stitch is also known as the French knot in Beijing. There are many types of stitches used by Chinese, such as: 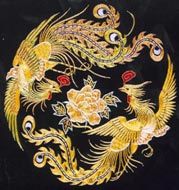 This embroidery is short name for Suzhou. Su embroidery reflects tranquility, refinement, vividness and elegance. In history, Su Embroidery dominated the royal wardrobe and walls. Even today, Su Embroidery occupies a large share of the embroidery market in China as well as in the world. 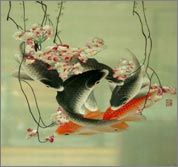 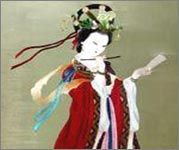 Xiang Embroidery- where the word 'Xiang' means 'human art', is a reflection of the ancient Xiang (Hunan) and Chu (Hubei) culture. This embroidery used to be a gift to the royal family during the spring and autumn period. Xiang embroidery became a special branch of the local art after the span of two thousand years since its origin. The embroidery is patterned after a painting draft; bringing it to live, and this is the specialty in this embroidery. Due to this bring in life technique in Xiang embroidery a flower seems to be spreading fragrance, a bird seems to be singing, a tiger seems to be running and a person seems to be breathing. 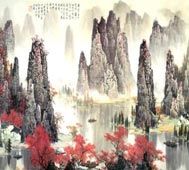 Yue Embroidery, which encompasses Guangzhou Embroidery and Chaozhou Embroidery, has the same origin as Li Brocade. It is believed that Yue Embroidery started from Tang Dynasty since Lu Meiniang, who embroidered seven chapters of Buddhist sutra, and was from Guangdong. Portrait of flowers and birds are the most popular themes of Yue Embroidery as the place of embroiderys origin is surrounded with the subtropical climate that favours the area with abundant of these plants that are rare seen in central China. In addition, Yue Embroidery uses rich colours for strong contrast and a magnificent and bustling effect. The most famous piece of Yue style embroidery is hundreds of Birds worshiping Phoenix. Fish, Lobsters, Bergamots and Lychee are also common patterns.

The roots of Gu embroidery can be traced to Gu Mingshi's family during the Ming Dynasty in Shanghai, and it is also known as Lu Xiang Yuan embroidery. Gu embroidery specializes in painting and calligraphy.

Han embroidery was originated from Chu (Hubei Province) and was passed to Wuhan, Jingzhou and Shashi. Tinted by the Chu Culture, Han Embroidery is characterized by rich and gaudy colours with bold patterns and exaggerated techniques. Han Embroidery came to its heyday in the middle and later Qing Dynasty and won recognition as well as accolades during many international expos and competitions.

Among ethnic groups, Bai, Bouyei and Miao people are also adept at embroidery. Their embroidery uses sharp contrast of colour and primitive design that invokes mystery in the piece of art.

By:
Fibre2Fashion
Published: Jan 2010
Reuse this Content
Our Clientele