State of the art of garment CAD development consists in the transition from implementation of the automated analysis at separate stages to intellectual complex system creation that provides informational unity of the whole product life span.

Nowadays, initial steps of cloth design actually are eliminated from CAD/CAM process line. Visual shape formation factors of model, such as primary description of design object and main esthetic criterion of developed model, are completely not taken into account in modern systems. Thats why creation of garments artistic design subsystem is necessary in automated system for improving conceptual decision of models form.

Initial step of cloth design is garment sketch design which at the present moment is implemented by two different methods. The first one is formation and decryption of flat sketch, specified as set of lines. The second one is sketch design as 3Dimensional model, it means as set of flat and spatial lines. Sketch design in both cases is implemented in modern CAD systems by the means of computer graphics, though decryption of sketch with the aim of achieving parametric information for construction of involute of model surface completes by constructor subjectively, without automated system support.

A whole number of scientific researches, directed to development of sketch design methods in 3D CAD, were made in the MGUDT in order to design intellectual 3D sketch module. The most optimal method of garment visual form design in automated system was defined on the base of the analysis of consecutive estimation of garment compositional decision process.

This method is based on the formation of graphic image with the usage of basic form elements, such as volumetric geometric figures.

Scheme of the consecutive formation 3dimensional sketch as example of female dress is represented at the pic.1. 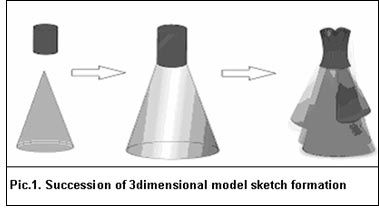 At the first step, according to the visual estimation, comparison of the model form with geometric figures that already exist in the data base, takes place. This way the features that describe volumetric geometric form of the garment are defined.

Developed method of the 3D sketch design provides its own self-descriptiveness, as for the needs of CAD, as for the needs of engineer- constructor. Information about peculiarity of model form geometric type can be used for definition of the garment form design methods and for the modeling methods selection.Parametric information of the 3 Dimensional garment visualization enables one to define necessary values and factors during construction development. 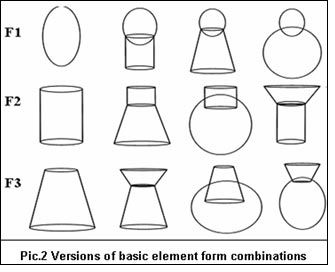 Advantage of such method of the 3D sketch design is the ability of using formerly included geometric forms in the system. This step allows user to avoid labor-intensive process of graphic visualization design for every new garment. Design of different compositional decisions of the model is achieved by the combination and regulation methods of the basic element form values. They can be of three types: elliptical or sphere- shaped; cylindrical and cone- form. At the pic.2 you can see versions of basic elements form combinations.

Introduced approach has a row of significant advantages because it ensures accuracy and consistency of engineering process, and also exposes modelors creativity. This approach allows user to cope successfully with the task of complex and combined cut garment construction design. Because modeler, while working with the 3 Dimensional model, achieves objective information about virtual garment form and persons body interrelation.