Textile Wastewater can make a Difference

Water...The elixir of life. So plentiful that, due to it, earth is also called the blue planet. But, what does water have to do with all the textiles and apparels that we use? 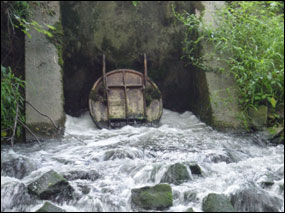 Textile industry is water intensive. On an average 200 litres of water is used to make 1 kg of textile. Water is used in every aspect of textile making right from cleaning the raw material, till flushing, dyeing, and bleaching, throughout the whole production. A recent survey states that global consumption of water raised six fold, which is more than double the rate of growth of population. The chemicals used in the textile industry are mainly used on polyester and conventionally made natural fibres. Even organic fibres are chemically treated. Just because the apparel consists a label marked 'organic', it does not necessarily mean that the fibres are processed without using any chemicals which are later not discharged into our ecosystem infecting it gradually.

Apart from the quantity of water used, what really matters is that the water used by the textile industry is not cleaned before it is discharged. A host of various chemicals used by the textile industry during the process of fabric, and apparel making is strongly proven to create health issues, when dumped into waterways; untreated. The untreated water causes serious damage to both living beings, and the environment, if it is not properly treated before being discharged.

Polyester manufacturers generally argue that polyester does not have any water footprint, as its making consumes less water comparatively over other natural fibres. Though it is right up to a certain extent, there are still other aspects of the process, which needs to be considered. The weaving part of the process consume the usage of same chemicals, dyeing agents, finishing chemicals, softeners, and other finishes such as anti-wrinkling agents. The base color of the recycled polyester yarn ranges from off-white to yellow. As it is difficult to achieve consistency for pale shades, to make it complete white, chlorine based bleach is used. To make the shades in a uniform way, the fabric is dyed and re-dyed several times, which consumes a lot of water. A report claims that recycled yarns consume 30% more dye to achieve the same shade of new fibres.

Treating the waste water costs the manufacturers, due to which they are reluctant. But when the safety of our environment is taken as a matter of priority, cost of treating waste water is not to be considered. Cleaner production is an appropriate approach to manipulate environmental issues. Solid materials which become a residue in the waste water consume the oxygen needed by animals and plants living in water. Treating waste water removes much of the suspended solids as possible before the remaining water, known as effluent is discharged back to the environment.

The priority and emphasis of the current period is treating the textile industry waste water. Low cost, and straight forward interventions have given significant money savings and environmental improvements. This will improve the quality of production while minimizing the cost of production, simultaneously.