A systematic approach to improve the existing tools and processes used by artisans engaged in carpet sectors had been initiated in 2000 by lIT Delhi. Since their developments, more than 250 looms are in use in several places of the country, namely, in Srinagar (J&K), Bhdohi (UP), Valsad (CU}), and other places. Metallic looms were designed considering all aspects of carpet weaving.

Traditionally, Indian or oriental carpets are knotted on wooden looms. These looms are not economically and functionally useful due to a) Limited life (5-8 years); b) Deforestation; c) Laborious tensioning; and d) Non-uniform tension in the warps over the time. The nonuniformity affects quality of the carpets. A systematic approach to improve the existing tools and processes used by artisans engaged in carpet sectors had been initiated in 2000 by IIT Delhi. Since their developments, more than 250 looms are in use in several places of the country, namely, in Srinagar (J&K), Bhdohi (UP), Valsad (GUJ), and other places. Metallic looms were designed considering all aspects of carpet weaving. The upper and lower beams are supported on two side columns and locked in the plane normal to the plane of the warp threads using ratchet and pawl and a worm gear pair, as shown in Fig. 1. 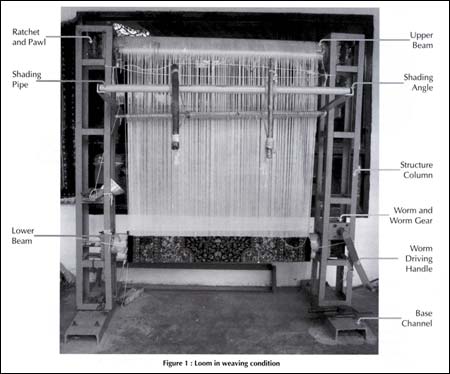 Over the years the above metalIic looms received several feedbacks in terms of the failure of worm and worm gear, etc. In this article, further improvements are reported with respect to the weaving of a 4 feet by 6 feet carpet. As the carpet knotting to weave about six-inches takes several days, the structure is subjected to steady loading. To check the design of the loom structure, finite element (FE) analysis of the metallic loom was carried out to determine the critical stresses and deflection in its components so that optimum sizes and shapes of the structural members can be selected. The results from the FE model are comparable with those from the analytical resuIts.The weight optimisation of the metalIic loom was also carried out resulting in relatively lightweight loom at reduced cost. The columns proposed in the new design are hollow square sections. In order to use fabricated structural sections, the earlier columns made with channels were changed to fabricated structure of angles (Fig. 1).

For the gear design, first, the loading conditions of the worm and worm gear were checked, and force analysis was performed. This was followed by their design according to Indian Standards (IS). To facilitate the design iterations a MATLAB computer programme was written which truly helped in checking any new worm gear set. Based on the newly design loom shown in Fig. 1,three different carpets were woven in the three different fabricated metallic looms placed in New Delhi, Ghaziabad (UP) and Bhadohi (UP). Their quality was found satisfactory by the users. A complete user manual detailing the engineering drawings and the assembly steps was prepared to help any manufacture to reproduce the looms. Since it is important to use the loom properly for smooth functioning and longer life, "Dos and Dont's" are also prepared to be displayed on the fabricated looms. There is also a pamphlet of the loom that was used to spread the message of new development amongst different users and exporters in India.

The Author is a Professor, Department of Mechanical Engineering, Indian Institute of Technology , New Delhi