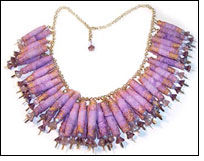 Whether you are a history buff or simply seeing handmade beaded jewelry worn by your favorite actresses, it is hard to look at the jewelry from the past and not take a look at the handmade jewelry that was worn then. While some of these pieces look unbearably clunky and old fashioned now, some would look right at home on today's top fashion catwalks and expos. Jewelry, in all of its forms, has had a strong effect on the world and the fashions that were based off of it.

Early in history, jewelry was a mark of status of some sort. Perhaps the only people who could wear it were of religious importance, or perhaps they were the only people who could afford it. You'll find that even though the handmade beaded jewelry from early eras seems primitive to our eyes that it was still crafted with care. For instance, the twisted torques, close fitting necklaces that were worn by the Celts, was often a sign of both manhood and wealth.

Later on, jewelry was a mark of privilege and leisure; it was a show that not only could you afford to feed yourself and your loved ones, but that you could spend a lot of extra money on beautiful things. For instance, in many parts of Europe, there were sumptuary laws that forbid people of a certain class from wearing things that were too extravagant, whether that was cloth, jewelry or special leathers. Often though, people would ignore these rules and the fact that they had to pay a fine was also seen as a mark of status and wealth! 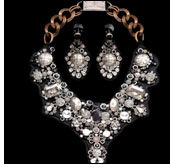 During the Victorian age in Europe, handmade beaded jewelry started taking the shapes that would be very familiar to those of us who wear jewelry today. The Victorian era had a very strong interest in death and funerary arts, though, and this was often eerily represented in so-called mourning jewelry, where people would snip hair from their departed loved ones and weave it into lockets, broaches and rings. Sometimes this jewelry would get very elaborate and it could be quite beautiful, especially when different shades of hair were used. 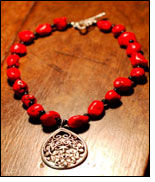 Today, we are experiencing a real renaissance as far as jewelry goes, and whether you love fine handmade beaded jewelry or simply love adorning yourself with something new every day, take a look and see what sort of impact the right piece of jewelry can have on you!

Given the fact that jewelry has played such a role in human history, it is no wonder that handmade beaded jewelry makes such an important appearance in our myth and legends as well! If you have ever wondered if people were as fascinated with beaded jewelry in the past as we are today, take a look below for some famous examples of jewelry in our most famous stories.

The magic ring has played a large part in myths and legends from around the world. For instance, in the original Aladdin, while the most powerful djinn was summoned from the magic lamp, a less powerful djinn came from a magic ring. King Arthur's magician Merlin was given a ring that forced him to fall in love with a young sorceress, while the Norse god Odin had an arm ring that would drop new gold rings from it every day. 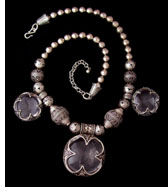 Magical necklaces certainly have their place in myth and folklore as well. The Near Eastern goddess Inanna descended into the underworld and at each gate she was asked to leave more behind, and one of the objects she dropped was a string of lapis beads. The Yasakani no Magatama is part of the Imperial Regalia of Japan, which are used in the ceremony to enthrone the emperor. This beaded necklace was thought to have been hung on a tree outside of the sun goddess's cave, to tempt her out of hiding after she had become frightened. Similarly, the Norse goddess Freya had a beautiful necklace known as Brisingamen, and when she wore it, no man could resist her!

Sometimes, particular gems will find their way into myths and legends. In Lithuania, for instance, it was once believed that there was a mermaid who displeased the gods by bringing a human lover to live with her in her amber palace. For a punishment, her palace was destroyed, and now she sits under the water weeping tears of amber for her lost live.

In Egypt, a menit was a beaded necklace with a flat counterpoise on the front and a counterweight on the back. This important piece of ceremonial jewelry was worn by devotees to the Egyptian goddess Hathor, and it was a sign of her authority and her ability to give her power to the pharaoh. Often, there would be art of the goddess Hathor hanging this necklace from the neck of the pharaoh or simply handing it to him as a sign of her approval.

As you can see, handmade beaded jewelry of various types and forms make up an important part of our myths and stories, no matter where we are in the world we are looking or with what culture.