The highly competitive nature of the Indian Textile Industry has made the US concerned, regarding the preferences, and subsidies extended by the WTO.

Indian textile industry is currently receiving certain subsidies from the global market to aid itself to ride the tide of global economic crisis. Earlier in 2008, Indias exports of textile and apparel were $21 billion forming 3.4% of the global trade worth $612 billion. Due to global meltdown, during 2009, the countrys exports to EU and US fell due to a slowdown in demand in these countries. Concessions were given in the form of discounts on interest for loans, and incentives to help the textile and apparel sector. Indian Government has contributed subsidies and other measures, which has helped the country to enhance its production, making it to surpass the US, and becoming the worlds largest producer of cotton. 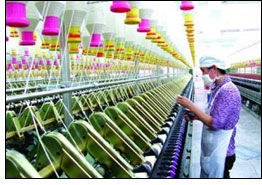 Given that Indias textile industry is highly competitive and subsidized, US remains concerned about the preferences extended to it. As per the WTO review, Indian textile and apparel exports worth of billions of dollars which are currently receiving export subsidies might no longer qualify for the same. US has asked WTO to review the possibilities for India to get qualified for concessions regarding export subsidies in the textile and apparel sector. It asserts that there are reasons to believe that India has met with export competitiveness as defined in the SCM (Subsidies and Countervailing Measures) agreement for certain products. But, India believes that it cannot be challenged as most of the subsidies of textile exporters are short term.

The SCM agreement exempts developing countries which have a per capita income below $1000 from prohibiting on export subsidies as long as the exports are lesser than 3.25% of the world trade for two consecutive years. Present subsidies given to India including carpets and handicrafts consist of a discount on interest on loans and incentives for exporting to specific markets in the form of duty-free imports. Some industry analysts optimistically believe that even if the textile and clothing exports exceed 3.25%, India would easily continue to get subsidies under other flexibilities allowed by the WTO. They believe that most of the subsidies given to textile exporters are on a short term basis, and hence there is very less chances for US asking WTO against sops to textile exporters.

There is yet another Special and Differential Treatment (S&DT) under which India can facilitate support to its exporters. This agreement contains provisions that help developing countries some special rights. They include longer periods for implementing Agreements, and commitments or measures to increase the trading opportunities for developing countries. Thus, even if the textile exports exceed 3.25%, India has the opportunity to receive subsidies under other concessions allowed by the WTO.

Indian textile industry contributes to 20% of the total industrial output, and 18% of the industrial workforce. With much strategic importance, it is necessary for the country to regulate the exports. A right strategy should be formulated to improve productivity level, quality and efficiency.