Article displays results of the various female figures form research at the terms of parametric information that is necessary for clothes design in the three-dimensional environment.

Fashion industry before market relations has been focused on the garment manufacture for a typical constitution figures. Frequency of occurrence of such figures among adult population is insignificant. Therefore only 1/3 of the adult consumers can be furnished by clothes of industrial production with the high quality fit.

For the individual consumer needs satisfaction majority of the modern firms whenever possible combine manufacture with address design methods.

The address design approach is used basically at plane construction design and does not involve a full variety of consumers figures. Often firms manufacture garments for certain group of consumers because the uniform garment design technique for the figures different from the typical is absent. Lack of the visualization elements of the finished garment on concrete not typical figures does not allow user estimate the appearance of the end model.

Engineering of the virtual three-dimensional models representation system, as transitive stage from the art sketch to the construction design, can become the decision of this problem. Now development of the automated methods of the projected garment volume representation are actively conducted, also solved questions of the models sketch data formalization and transition from the sketch to the construction.

Lack of the information, that high-grade features volume-spatial external form of the person, configuration of the garments form and surface plasticity formation according to the definite figures of the concrete customers, leads to the inaccurate display of the models sketch during its realization in the garment.

Development of the automated clothing method of the concrete consumer allows realization possibilities of address design in the conditions of the industrial production, improves design process from the creation of aesthetically expressive models point of view.

Nowadays at this direction of investigations on chair of Technology of sewing manufacture of the Moscow State University of Design and Technology research development of a persons body surface for the purpose of creation of the parametrical virtual dummy construction module takes place.

During development of the parametrical persons figure surface description the set of the dimensional features, necessary for the figure volume display, defines. As well ways of the information about figure surface reception selects, laws of a parity of various parameters of a body come to light.

While parametrical description development the simplified three-dimensional persons figure model is represented by the shape of eight segments: a head, the top and bottom part of a trunk, a shoulder, a forearm, a brush, a hip, a shin, a foot.

Nowadays the bottom part of a trunk is extensively investigates. It was established that cross-section sections of the bottom part of a trunk can be approximated by such geometrical figure as ellipse that describes in length, longitudinal and cross-section radiuses. Thus longitudinal and cross-section radiuses corresponds to the projective dimensional features of the figure. The length of an ellipse corresponds to the dimensional feature, describing the grasp of the figure on the chosen section (fig. 1). 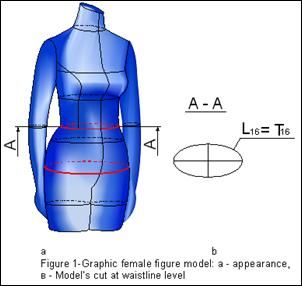 The mathematical model of the bottom part of a trunk of a female figure is described by following values (fig. 2): 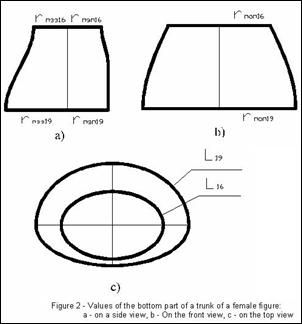 L16 Length of an ellipse cut at the waistline level,

rпзп16 Front back forward radius of an ellipse at the waistline level cut,

rпзз16 Front back back radius of an ellipse at the waistline level cut,

rпоп16 Cross-section radius of an ellipse at the waistline level cut,

L19 Length of an ellipse section at the hips line level cut,

rпзп19 Front back forward radius of an ellipse at the hips line level cut,

rпзз19 Front back back radius of an ellipse at the hips line level cut,

rпзз19 Cross-section radius of an ellipse at the hips line level cut.

T95 Front back diameter of a waist;

T55 Cross-section diameter of a waist;

Т19 A circumference of hips with the account выступания a stomach;

T112 Front back diameter of a circumference of hips with the account выступания a stomach;

T79.1 Depth of a waist the fourth (stomach projection concerning a deflection on a waistline);

T79 Depth of a waist the second (buttocks projection concerning a deflection on a waistline);

T79.2 Depth of a waist the sixth (a lateral surface of a hip projection concerning a deflection on a waistline).

Relations of front back and cross-section diameters of a waist and hips circumferences correspond to the dimensional features that characterize concrete figure: