With all the tumult caused by recession, India is still seeing hopes to narrow down its trade deficit.

Indias trade deficit or the difference in the exports and imports, where the latter exceeds the former, is likely to narrow by 10% and reach $107 billion USD by the end of this year. The strong rushing of the export performance has saved India from a trade deficit. Due to the pickup in export figures in the recent past, the country is saved from the shortfall. 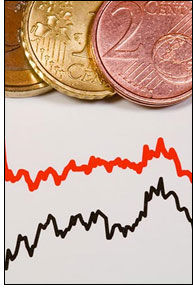 During the period of global recession, Indias exports declined up to 40%, but later during November, came to a positive track. Foreign trade investments in India went up till 15% this February. Value of the export items picked up to exceed $16 billion USD in February, the highest figure in the past one year. Still foreign trade is likely to fall short by 10% comparatively over the last year. Export figures for the whole year is anticipated to be around 35% making $168 billion which is approximately 10% lesser compared with the figures of the corresponding period during the previous year. Despite the slight decline, it gives a positive feeling that India is able to surpass the trade deficit amidst the economic downturn.

Total FDI during 2009-10 was around $24.7 billion. During the corresponding period in the previous year, the figures were $25.4 billion. Though a little less, this is a positive indication that Indian economy has remained in the same despite the global turmoil.

Industry analysts believe that Indias trade deficit is deteriorating though oil prices fell during the past months comparatively over the corresponding period during the previous year of recession. A data from the Reserve Bank states that the level of current deficit is 12 billion, whereas it was $11.7 billion during the corresponding period in the previous year. Rise in current account deficit weakens sentiment for the rupee.

In response to the trade gap, Indian Government is monitoring Chinese reaction to its concerns. During the previous year Indias exports to China was $11 billion, while China exported an excess of $27 billion to India. Indian Government will plan for more access in the Chinese markets. Chinese companies show more interest in bidding for undertakings and infrastructure developments. Many projects are acquired by them such as highways, metro, steel plants and power sector. Measures such as removal of tariff, and non-tariff barriers restricting import of power plant equipments from India, and removal of import restrictions on rice, vegetables, and fruits are being considered.

A pick up at the end of 2010 is likely to make up for the decline which happened during the year. New regulations regarding the FDI are also expected to structure the global confidence in Indian economy.